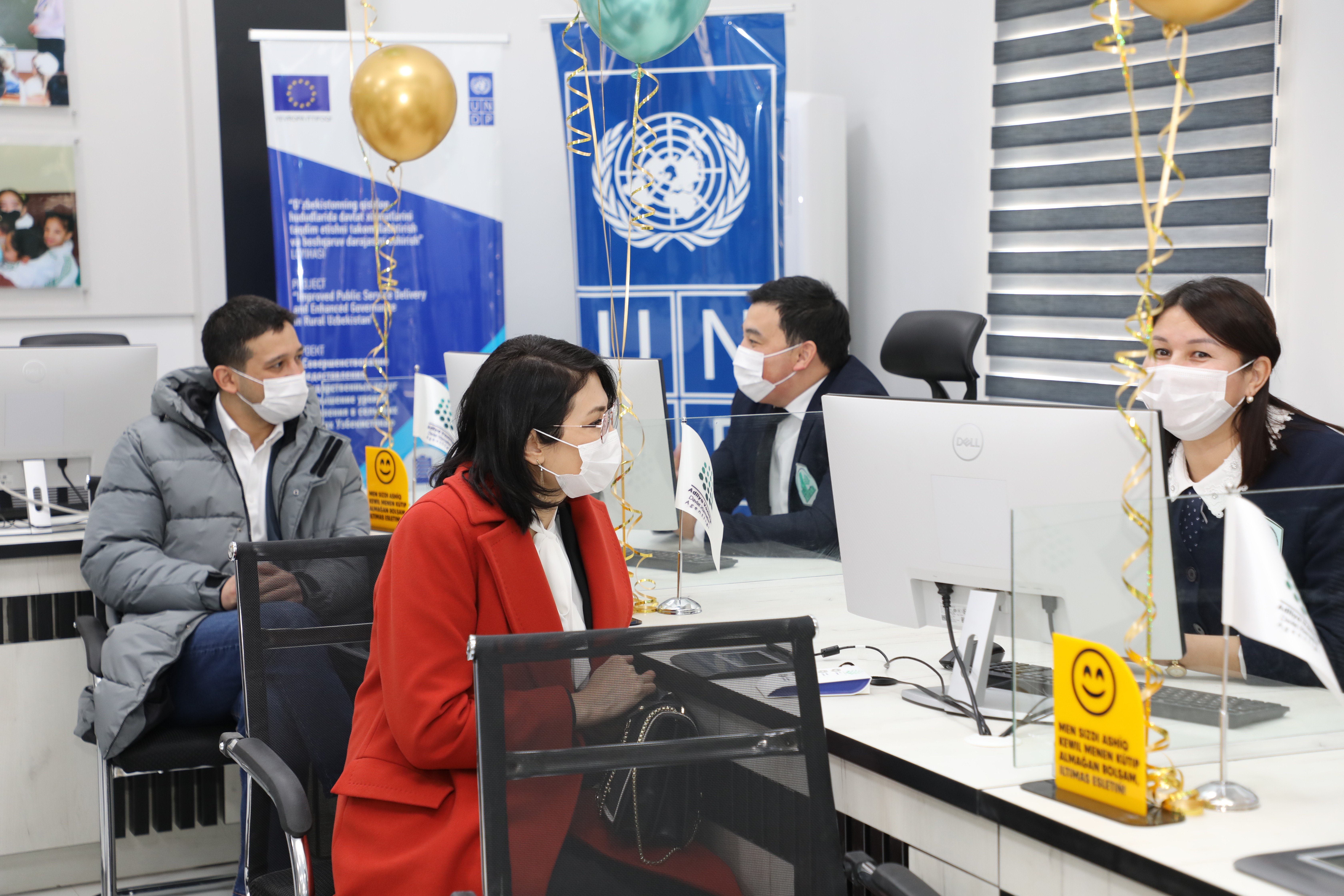 A joint project of the Public Services Agency under the Ministry of Justice of the Republic of Uzbekistan, the European Union and UNDP in Uzbekistan "Improving public service delivery and improving the governance level in rural areas of Uzbekistan" helps to equip new Centers in pilot regions, as well as the PSC in Khojeli with modern IT and communication equipment (servers, PCs, network and telecommunication devices, video surveillance devices, user feedback devices, etc.), comfortable waiting area and modern air-conditioning system. 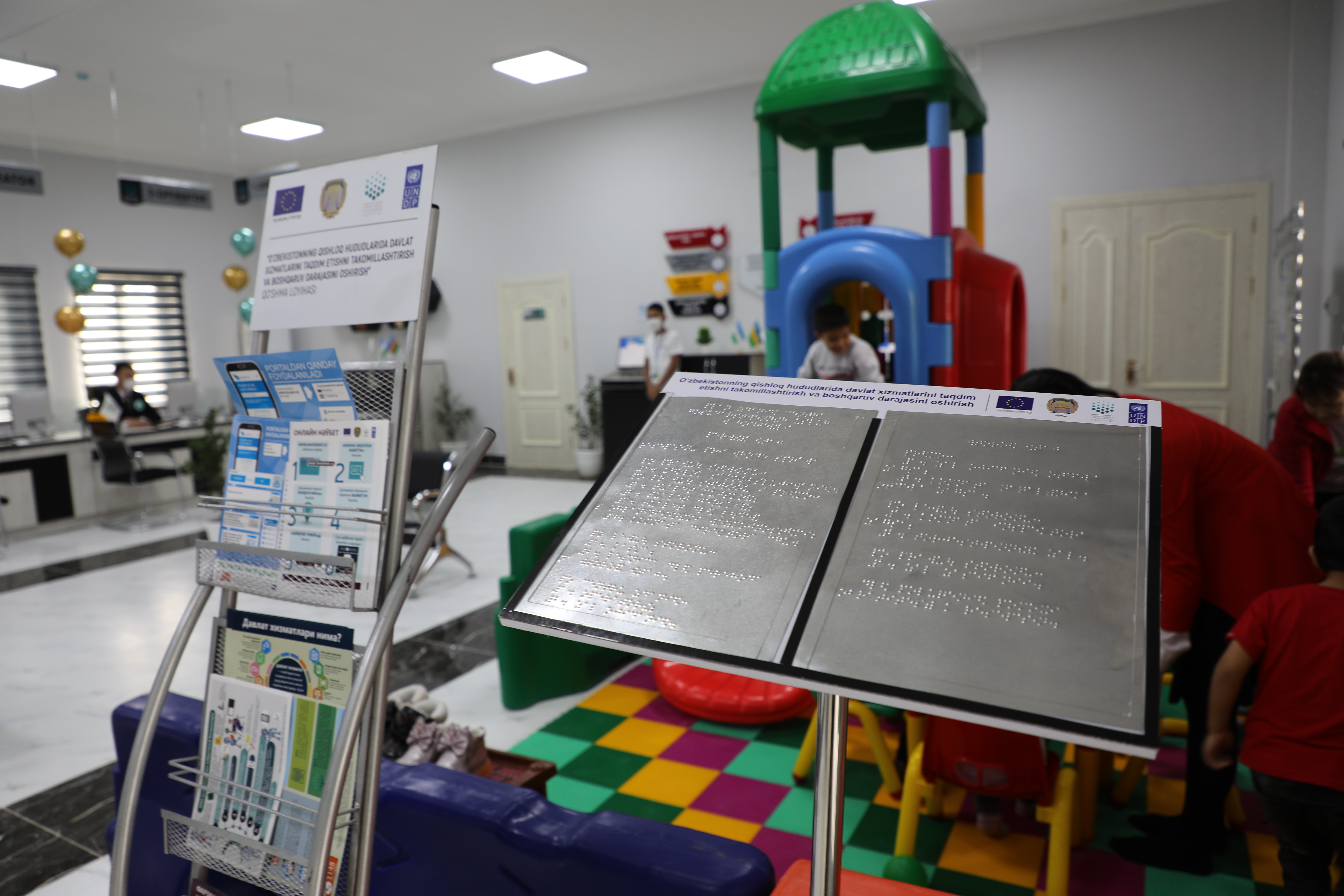 During the construction of the building, special attention was paid to its compliance with modern inclusive urban planning standards and the creation of the most comfortable conditions for citizens, especially people with disabilities. The new Center has an electronic queue system, an information kiosk, an area for self-service electronic services, a children’s playground and a mini-library. There are also information stands and posters to raise awareness among visitors about the various opportunities for self-service government services. 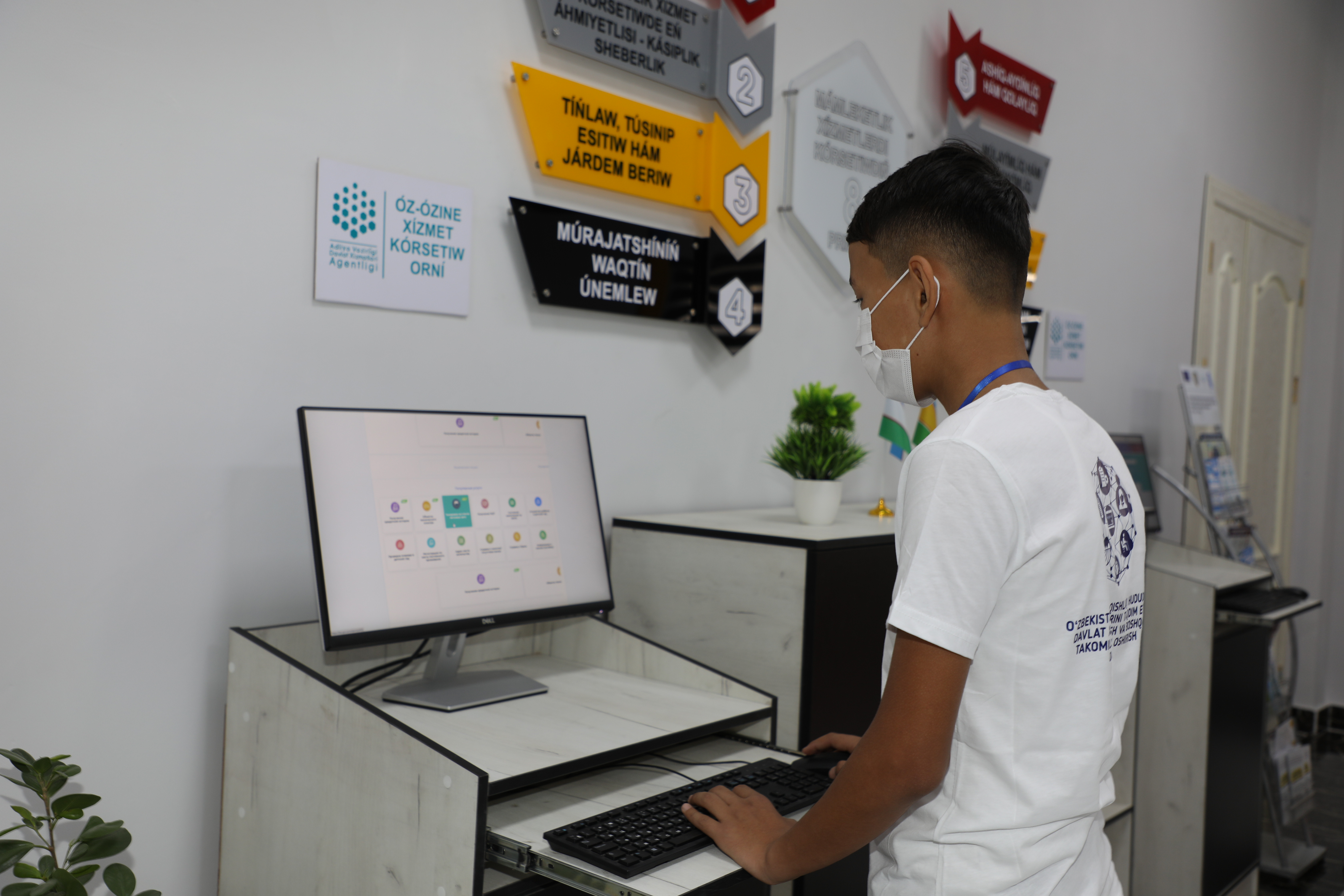 Most of the public services can be obtained on an extraterritorial basis, that is, regardless of place of residence and stay. A new PSC in Khojeli district provides about 160 types of public services and is capable of serving up to 200 people a day. 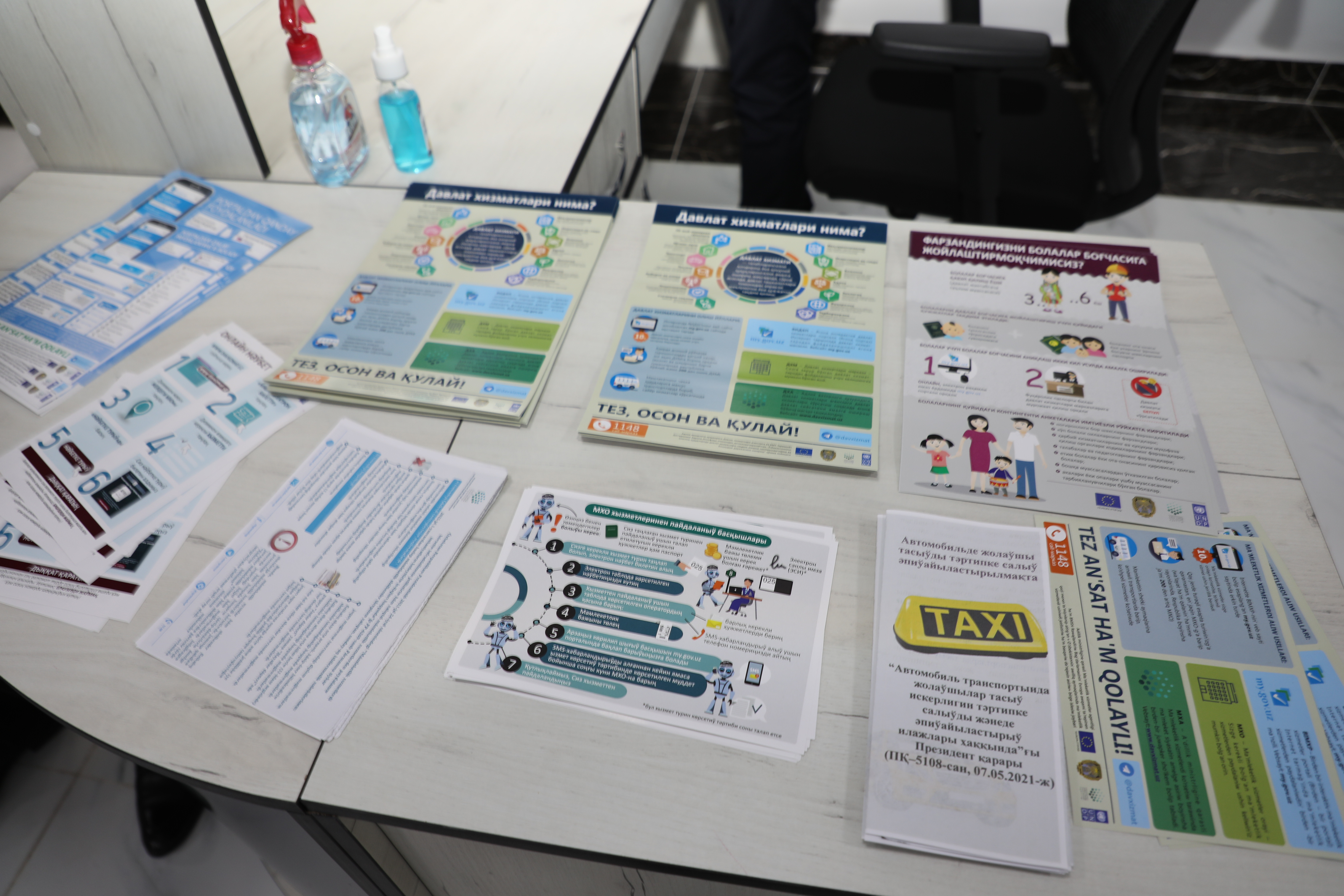 In addition, within the framework of the Joint Project, Braille is already being introduced for the convenience of obtaining public services, trainings are organized for operators of Centers for Service for Persons with Disabilities and a special tab is being developed for people with special needs on the portal of public services. For the general population, there will be courses in computer literacy, use of ITCs and the unified portal for public services my.gov.uz. 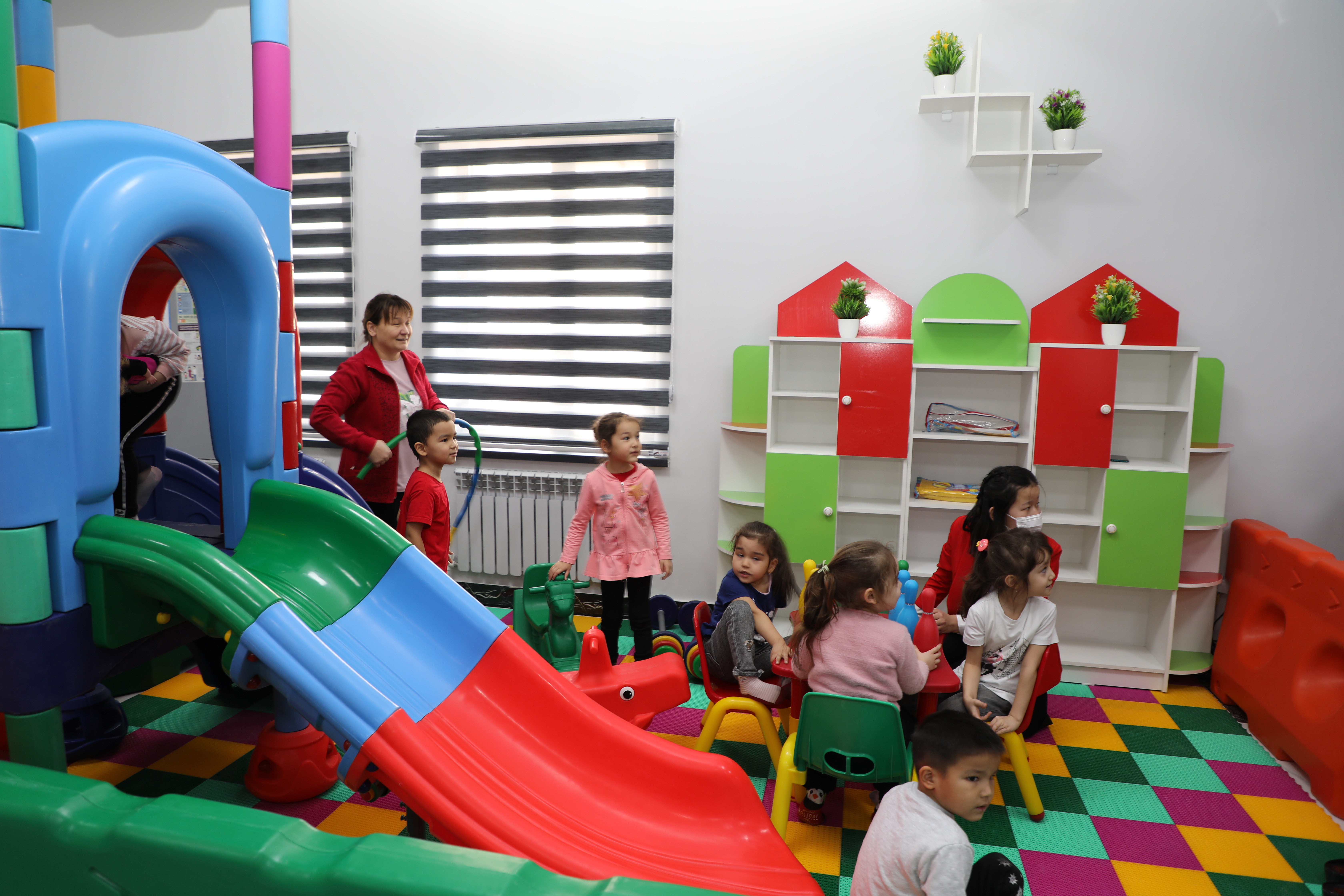 The PSC in Khojeli, like the other pilot centers, will implement a volunteer programme which is aimed at involving volunteers in the work of the Agency and Public Service Centers to provide public services to vulnerable groups - people with disabilities, the elderly and women with young children. All volunteers underwent trainings to prepare them for interaction with the population in the provision of public services in remote areas. Each volunteer will be equipped with technical means necessary to carry out their duties.

Also, as part of the celebration of the Agency's four-year anniversary, there was a press conference on improving public service delivery in Uzbekistan. The Public Service Agency and the Joint Project presented the main achievements in 2021 and answered questions from the media.

The Manual on Effective and Efficient Usage of BPR in Public Service Delivery (BPR Manual) is developed as a tool supporting the service providers in transformati...

On 6 and 7 July, the Central Election Commission of the Republic of Uzbekistan (CEC) in partnership with the Journalists Retraining Center and United Nations Deve...

UNDP in Uzbekistan, with funding from the European Union, is supporting the government’s sweeping national public administrative reforms with a concerted effort t...

The administrative reforms introduced by President Mirziyoyev in 2017 were meant improve the quality and reach of essential public services to all people of Uzbek...