Relocated from war-ravaged Mariupol, the NGO Heavenly Fortress has set up a centre to recreate the ‘beating heart’ of its native city, introducing the public in Dnipro to its diverse culture.

DNIPRO, Ukraine, 11 July 2022 – Relocated from the war-ravaged Ukrainian city of Mariupol, the NGO Heavenly Fortress has created a centre in Dnipro, Dnipropetrovsk Oblast, to support internally displaced persons from the areas of the county most affected by the war.

Recognizing the strong potential of this unique new facility for displaced Ukrainians fleeing violence in the east of the country, the EU and UNDP helped organize the opening of the centre as a way both to support the relocated NGO and to boost social cohesion among IDPs and the locals in Dnipro.

Previously, the NGO had been providing daily humanitarian assistance to some of 2,000 IDPs in Dnipro. Now, with a fully operational centre ready to serve people in need, it will be able to increase its reach to more than 100,000 IDPs and locals in Dnipro. The centre will offer various services: from organizing artistic events and exhibitions, to providing legal and psychological assistance to the displaced. Thanks to EU and UNDP support, the centre now has a spacious co-working space and a Ukrainian library.

Frederik Coene, Head of Cooperation at the EU Delegation to Ukraine, said he believes the centre will be a great success in the city, and will contribute to the better integration of IDPs into their new community.

“The opening of this residence clearly shows that no military weapon can ever destroy the authentic Ukrainian culture,” Coene said. “The strong desire we see to preserve and share it is inspiring, and gives us hope in these difficult times. We, together with our UNDP partners, want to assure Ukrainians that we will continue to do our utmost to help such social initiatives grow and get stronger – and the war will not stand in our way.”

Manal Fouani, the interim UNDP Resident Representative in Ukraine, said that she never ceased to be impressed by the speed and quality of the recovery interventions designed and implemented in response to the war by civil society in Ukraine.

“We at UNDP are stunned by the incredible zeal of Ukrainians from Mariupol who despite temporarily losing access to their hometown have found the strength to actively implement important initiatives to help other displaced people in their host communities,” Fouani said.

“UNDP will continue working side-by-side with all war affected populations alongside our strategic partners at the EU. Treading this difficult path together can only lead to strengthened resilience of Ukrainian people through engaging institutions and empowering civil society organizations.”

Using funds provided by the European Union under the framework of the UN Recovery and Peacebuilding Programme, UNDP purchased furniture and technical equipment for the space worth more than UAH 600,000 (U.S. $20,000). EU and UNDP officials participated in the launch ceremony.

Heavenly Fortress head Kyrylo Dolimbaev said the idea behind the centre was to care for the needs of displaced people while introducing the public to the diverse culture of his native Mariupol.

“The Open space – Little Mariupol – is a place where the big heart of Mariupol beats,” he said. “We really wanted to create a place where everyone can feel at home. I hope that we’ve made it happen.” 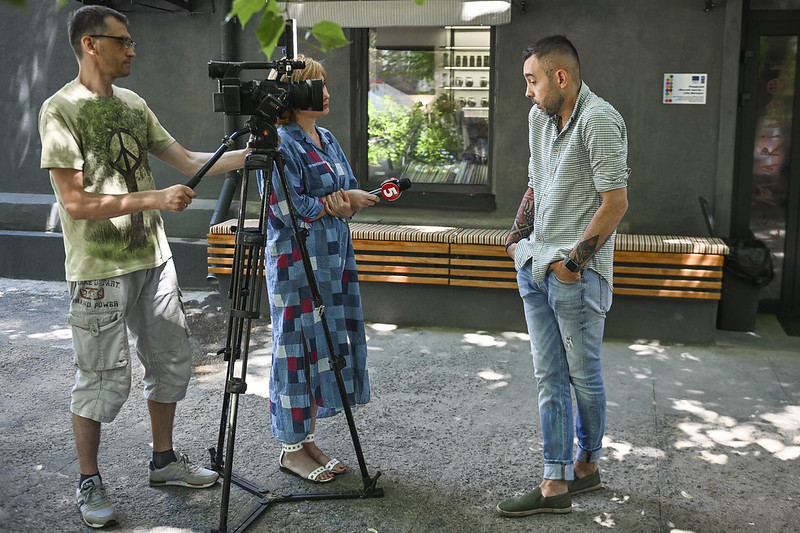 The United Nations Development Programme (UNDP), together with the Regional Development Agency of Luhansk Oblast, has organized a series of webinars and online me...

UNDP together with Association of Persons with Disabilities of Uzbekistan, Agency for Development of Medico-Social Services and National Human Rights Center of Uz...

Development of the agricultural potential in ecovillages also helps to strengthen the communities’ food security while work on the ground contributes to psycholog...