“Our priority has been to understand our national partners needs and work together towards innovative solutions. We strive to be as responsive as possible, comprehending that as a knowledge organization we are uniquely placed to empower our counterparts in advancing sustainable development and climate resilience.” These were the heartfelt sentiments shared by Luis-Francisco Thais Santa Cruz, Head of the Dominica Project Office of the United Nations Development Programme (UNDP) Barbados and the Eastern Caribbean Multi Country Office, as UNDP achieved the nation’s highest accolade for its commitment to the sustainable development of Dominica as the island celebrates 43 years of Independence.

The Dominica Award of Honour is the highest recognition under The Meritorious Service Act and is conferred on persons who have made a significant contribution to the country's development. Each year, on Independence Day, November 3, the President confers honours on persons who have rendered meritorious service to the Commonwealth of Dominica and this year UNDP was highlighted as the recipient.

Valerie Cliff, Resident Representative UNDP Barbados and the Eastern Caribbean, accepted the award and applauded the stellar work of the Dominica Country office team through the various projects being coordinated to support the island. “We are honoured and humbled by this show of acknowledgement of our work, and grateful for the trust and support of the Government of Dominica to allow us the opportunity to serve in the role of implementing partner for several successful interventions implemented over the years,” she stated. 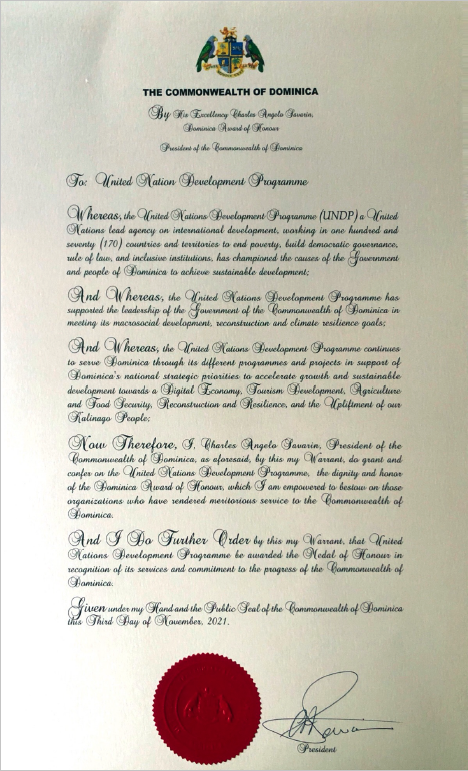 Speaking on the country’s progress, Prime Minister the Hon. Roosevelt Skerritt addressed those present at the award ceremony and noted that while Dominica has faced more than its fair share of natural and economic shocks, the island continues to be a beacon of hope as it moves towards its climate neutral goal. He thanked the nation’s partners for their continued support especially in relation to the COVID-19 pandemic stating, “we have not had to battle this disease alone”. Further discussing the various projects the government supported towards resilience building and sustainable development, he further highlighted several initiatives that UNDP implemented and also demonstrated the developmental agency’s commitment to assisting the youth with the Dominica Work Online Programme. “We’ve been partnering with our friends from UNDP and others to have Dominican youth exposed to online opportunities to expose our young people”, he stated noting the success of the programme where 75 young people received jobs from international firms remotely.

UNDP currently has several ongoing projects in Dominica, garnering support from various donors and partners including the Government of Japan, the Government of Canada, the India-UN Partnership Development Fund, Government of China, the European Union, and the United Kingdom’s Foreign, Commonwealth and Development Office. “It is through the support of our partners and donors who are also committed to building resilience in the region that we are able to coordinate projects to support Dominica’s development goals,” Cliff noted, adding, “and this continued collaboration is an important part of the successful development of the region as we build forward better on our journey to the 2030 Agenda.”

At this time when exogenous threats like COVID-19 and natural disasters are impacting the region, it is vital that developmental efforts are continued to reinforce the need for regional resilience and building forward better. This award highlights the work of UNDP Barbados and the Eastern Caribbean in its commitment to promoting economic diversification, job creation and resilience with the "Blue Economy for Green Islands" vision; underpinning UNDPs comprehensive response to supporting recovery and reconstruction efforts post Hurricane Maria. As the Caribbean continues to seek solutions to support traditionally vulnerable groups, UNDP Barbados and the Eastern Caribbean, in partnership with governments and stakeholders, remains dedicated to the advancement of inclusive and sustainable development throughout the region and building resilient communities that can withstand shocks and crises through targeted projects and programmes.

UNDP is the leading United Nations organisation fighting to end the injustice of poverty, inequality and climate change. Working with our broad network of experts and partners in 170 countries, we help nations to build integrated lasting solutions for people and planet. Learn more at www.bb.undp.org or follow at @UNDPBarbados

Behind the Blue: Community-focused solutions to harness the Blue Economy

We are faced with the indisputable fact that we are in the age of the Anthropocene – this is the first time in our history where human activity has been the domin...

There is much work to be done as UNDP embarks on a mission to support governments in the Caribbean finance the Blue Economy (BE) under the Sustainable Development...

St. Vincent and the Grenadines Volcano Recovery: A Year of Resilience

Gray skies and fields are not normally associated with the tropical environment of the beautiful country of St Vincent and the Grenadines, but a year ago the land...

Bridgetown 16, May 2022 - Leveraging the symbiotic relationship between fish and plants is at the heart of a new project aimed at increasing food security, buildi...

“It's your world; you are inheriting it, so absolutely, we want to hear from you.” The words of Valerie Cliff, Resident Representative, United Nations Development...