Kyiv, 11 January 2023 –The pyrotechnic units of the State Emergency Service of Ukraine today received a batch of special demining and protective equipment from the United Nations Development Programme (UNDP) and the Government of Japan. This delivery, funded by the Japanese Government through the Emergency Explosive Ordnance Clearance and Debris Removal project, includes mine detectors, portable and car radio stations, body armours and helmets. It will be used to support demining in areas of Kyiv Oblast that are contaminated by mines and other explosive ordnance.

The handover ceremony took place on the premises of the State Emergency Service in Kyiv City with the presence of Mr Kuninori Matsuda, Ambassador of Japan to Ukraine, and H.E. Ms Ivana Živković, Assistant Secretary-General, Assistant Administrator and Director of UNDP’s Regional Bureau for Europe and Commonwealth of Independent States.

“For UNDP, the long-standing partnership with the State Emergency Service of Ukraine is a priority in overcoming the challenges of war and supporting fast and safe recovery of Ukraine,” said Ivana Živković. “Thanks to the strategic support of the Government of Japan, which was one of the first donor countries to provide essential funding, we can reinforce Ukraine’s capacity to ensure safe returns for its citizens.”

Since the beginning of the full-scale invasion, the joint efforts of UNDP and the SESU have been focused on two areas – mine action and humanitarian demining. According to the Ministry of Internal Affairs, about 30 percent of the territory of Ukraine is contaminated by explosive objects. To help the SES units respond to the ongoing crisis, the UN Development Programme, with financial support from the Government of Japan, is providing technical support for their emergency needs.

Kuninori Matsuda, Ambassador Extraordinary and Plenipotentiary of Japan to Ukraine, said “the clearance of mines, unexploded ordnance, and debris containing toxic substances is essential as a first step toward recovery and reconstruction.” Then he expressed his hope that “the equipment that the Japanese government will provide through UNDP will contribute greatly to the reconstruction of Ukraine, and the day will come soon when the people of Ukraine can live in peace.” He concluded his speech expressing his “respect for the bravery and dedication of the SESU mine clearance team members, who are engaging in dangerous missions on behalf of the citizens.”

Serhiy Kruk, Head of the State Emergency Service of Ukraine, thanked the ambassador and added: “We will never give up trying to protect the safety and integrity of our people. Having the proper tools to do our work makes us more effective at doing that. Without your support, many more lives would be lost.” 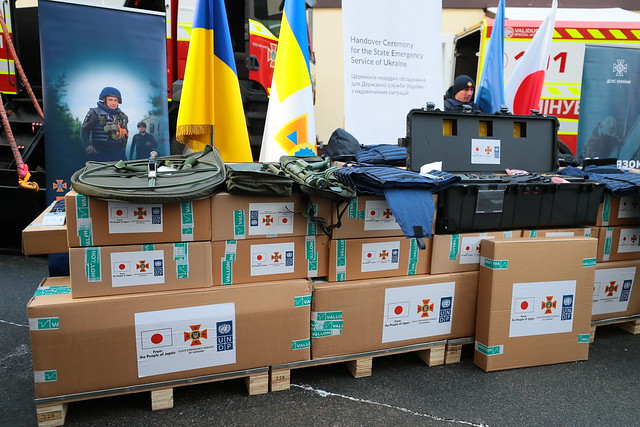 With EU support, UNDP will repair more than 50 schools in Ukraine

The United Nations Development Programme in Ukraine has launched a project aiming to repair initially 50 schools that were damaged during the full-scale Russian i...

The United Nations Development Programme (UNDP) in Ukraine, with financial support from the Government of Canada, has handed over two vehicles for the provision o...