UNDP, with the support of Canada, has delivered eight ambulances to communities on the front lines of the war in eastern and southern Ukraine

KYIV, 25 July 2022 – The Emergency Medical Aid and Disaster Medicine Centres on the front lines of the war in Ukraine have received two vehicles each per community to help them respond to the growing number of casualties. The life-saving transport will help doctors in Chernihiv, Kharkiv, Odesa and Sumy provide emergency medical attention and evacuate the wounded.

The United Nations Development Programme (UNDP) in Ukraine, with funding from the Government of Canada, provided the life-saving transport vehicles within UN Recovery and Peacebuilding Programme.

The medical infrastructure in Ukraine has suffered significant damages over five months of war. Manal Fouani, acting UNDP Resident Representative in Ukraine, said this has resulted in reduced capacity to rapidly respond to increasing demands for emergency medical services. “Availing timely and efficient ambulatory medical services is critical for rescue operations during war times. UNDP and our partners are working with the Government of Ukraine to support the country’s doctors, paramedics, and rescuers in any and every way we can,” she said.

The ambulances have armoured protection and special medical equipment that can help save lives in remote areas. Each ambulance can evacuate up to four patients, and is equipped with all that is needed for emergency care, including an aspirator, a pulse-oximeter, a defibrillator-monitor with a pacemaker, an electrocardiograph, a device immobilizing the cervical spine and much more.

UNDP, within the UN Recovery and Peacebuilding Programme and with the support of the Government of Canada and other partners, is working to ensure healthcare professionals in Ukraine have access to the medical facilities and tools they need to continue their important work. Other recent joint initiatives include providing an operating table for the Chernihiv Central District Hospital and organizing emergency medical training for specialists and volunteers of Social Service Centers to help internally displaced families from Donetsk, Luhansk, Sumy, Kharkiv and Kyiv oblast. 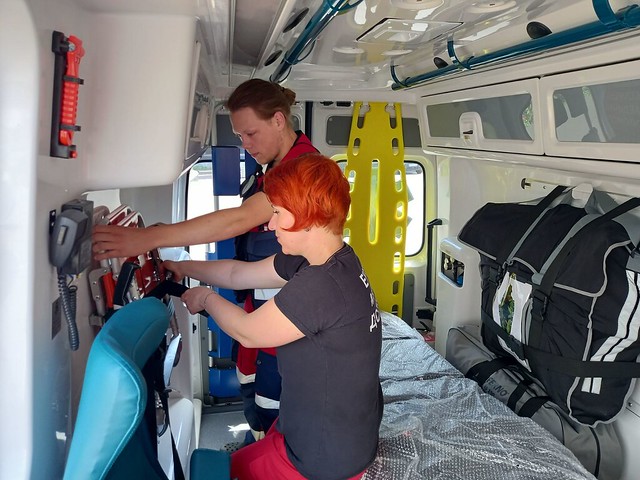