Thousands of schoolchildren benefit from school upgrades in Odesa

ODESA, Ukraine, 7 September 2021 – The first of four schools being renovated under the Ukraine Early Recovery Programme (UERP) opened in Odesa today, along with the inspection of a city hospital and two other schools under reconstruction. The overhaul of educational institutions across Odesa is being implemented by the Ministry for Communities and Territories Development of Ukraine together with local government bodies, with funding from the European Investment Bank and technical support from the United Nations Development Programme. The initiative also benefited from €1.5 million in technical assistance from the European Union.

More than 4,000 schoolchildren in Odesa will benefit from the modernization of School №41, which included a comprehensive renovation of interiors, thermal modernization, a roof replacement, and improvement and fencing of school grounds. The school was built in 1892, and had not been in use for a long time as it did not meet sanitary and safety standards. Further repairs and renovations at schools №31, №39 and №49 are still in progress.

During the official opening of the modernized school Serhiy Hrynevetsky, Governor  of Odesa Oblast, said the regional government deeply appreciates its partnership with the European Investment Bank and UNDP.  “We want our graduates to be best prepared for the next stage of education, with a solid foundation of knowledge and skills,” he said. “This would be much more difficult to achieve without these modern buildings and facilities.”

Remi Duflot, the Deputy to the Head of the EU Delegation to Ukraine, said the EU supports Ukraine in improving social infrastructure, a key factor for local development and economic growth. “School no. 41 which we opened today after major renovation works is an excellent example of the partnership we have developed in the Odesa region”, he said. “It is a long-term investment which is very much the effort as it provides better facilities and conditions for students and teachers alike.”

UNDP Deputy Resident Representative to Ukraine Manal Fouani added that such public investments in education ensures the country has a firm footing on the path to future prosperity. “The president of Ukraine issued a decree integrating the Sustainable Development Goals into Government policy on a ‘leave no one behind’ basis,” she said. “Renovating schools is a good way to fulfill the promise of SDG4, which seeks to ensure inclusive and equitable quality education for all, including the vulnerable and marginalized in society.”

Roy Draycott, Senior Sector Specialist of the Regional Development Division at the Resident Representation of the European Investment Bank in Ukraine said the EIB pays close attention to creating a favourable modern environment in which children can receive a quality general secondary education, acquiring important communication skills and abilities to help them solve problems of varying difficulty. “Every student needs a comfortable and modern place to study,” he said. “The EIB is striving to ensure that all Ukrainian schoolchildren have access to modern conditions for learning and developing their full potential.”

The Ukraine Early Recovery Programme has been operating in Odesa Oblast since the end of 2019. Thanks to its support, five facilities in Odesa have been modernized – four schools (repairs completed at school №41, while at schools №31, №39 and №49 repairs are in progress) and a polyclinic department of City Hospital №8. The total investment by the programme in the social infrastructure of the city amounts to €4 million. In addition, the city budget funded additional work on all of the projects.

The Ukraine Early Recovery Programme is not one-time support. Thanks to its successful results in 2021, the Verkhovna Rada of Ukraine has ratified a new Financing Agreement worth €340 million to continue its activities for the next five years. These funds will be used to rebuild infrastructure and improve conditions for living and doing business in conflict-affected regions in eastern Ukraine, as well as to support the country's sustainable development as a whole.

The European Investment Bank (EIB) is the long-term lending institution of the European Union owned by its member states. It makes long-term finance available for sound investment in order to contribute towards EU policy goals.

About the EIB in Ukraine:

The EIB has worked with Ukraine since 2007, where it is the main recipient country of EIB support in the Eastern Neighbourhood, accounting for more than 60% of EIB lending activity in this region. The bank focuses on social and economic infrastructure, transport and connectivity, local private sector development, energy efficiency, climate action, and innovation. Today, the EIB is one of the largest investors in Ukraine with signed projects of €7 bn.

The Ukraine Early Recovery Programme is implemented in accordance with the Financing Agreement between Ukraine and the European Investment Bank. Through the programme, the EIB provided €200 million in multi-sectoral framework loans to local authorities to rehabilitate important utilities and transport infrastructure and improve living conditions for internally displaced persons and their host communities in nine oblasts of Ukraine: the Ukrainian government-controlled areas of Donetsk and Luhansk oblasts, Kharkiv, Dnipropetrovsk, Zaporizhzhia, Poltava, Odesa, Kherson, and Kyiv oblasts.

About UNDP in Ukraine:

UNDP is the leading United Nations organization fighting to end the injustice of poverty, inequality, and climate change. Working with our broad network of experts and partners in 170 countries, we help nations to build integrated, lasting solutions for people and planet. In Ukraine, UNDP's work focuses on three programme areas: inclusive development, reconstruction and peacebuilding; democratic governance; energy and environmental protection. Today, Ukraine has one of the largest UNDP programmes in Europe. 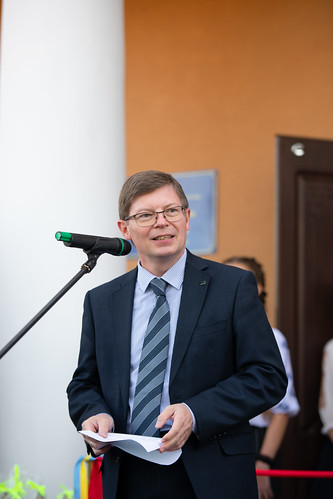 The Japan-UNDP project “Emergency Explosive Ordnance (EO) Clearance and Debris Removal” entered a new phase this week to ramp up recovery efforts in the Kyiv reg...

Accurately assessing the scale and detail of the damage being caused to Ukraine’s social and economic infrastructure is a herculean task but one made feasible wit...

The EIB and UNDP have signed a €2 million agreement funded by the multi-donor E5P Fund to assist Ukrainian cities in implementing a €300 million EIB energy effici...

Ukrainian youth engaged in raising awareness of and combating corruption

The United Nations Development Programme and the National Anti-Corruption Bureau of Ukraine (NABU) joined forces to engage and inspire youth to take a more active...