Lviv, 5 November 2018 – A full-scale exhibition of enterprises from eastern Ukraine, East Expo 2018, was held at the Lviv Arena Stadium on 1-2 November as part of the 18th Lviv International Economic Forum. The exhibition was organized by UNDP in Ukraine with financial support from the U.S. Embassy in Ukraine and the governments of Poland and Japan.

For the first time in the history of Ukrainian entrepreneurship, almost 70 businesses from Donetsk and Luhansk oblasts came to Lviv. For two days, Lviv residents and guests in the city had the opportunity to find business partners, attend training sessions on various themes, and debunk the myth of there being a business crisis in the eastern part of the country.

“For this expo we brought over 70 businesses from Donetsk and Luhansk oblasts to Lviv to show that even if eastern Ukraine is affected by conflict – it is also a region of admirable resilience, talent and innovation. With economic recovery happening, eastern Ukraine has many interesting opportunities for trade and economic cooperation on offer”, said Osnat Lubrani, UN Resident Coordinator, Humanitarian Coordinator and UNDP Resident Representative in Ukraine.’

“We expect a very positive outcome from ‘East Expo 2018’ as it is not just about attracting new clients and potential partners; it’s also a chance for exposure of businesses beyond Donetsk and Luhansk oblasts to forge new partnerships across Ukraine and globally”, Lubrani added.

All the expo participants had the opportunity to attend panel discussions at the 18th Lviv International Economic Forum, the major event in the economic life of western Ukraine. Over 30 businesses from the East found potential business partners at business-to-business meetings facilitated by Lviv Regional Chamber of Commerce. The entrepreneurs learned about marketing, crowdfunding, and business cases at East Expo 2018 thematic training sessions provided by Ukraine’s leading experts.

An impressive array of entrepreneurs took part in the exhibition, showing off a variety of businesses, ideas and success stories. Take, for example, the company Farm 3D (a maker of three-dimensional printed products), which was started because the co-owner of the company, Bohdan Trystan, assembled the printers himself. From there, his hobby grew into an innovative, promising business. Today, Bohdan and his partners Serhiy and Uiliia Gakov create souvenir products, assemble 3D printers, and teach teenagers 3D design. But the real pride of these entrepreneurs is their production of custom-made prosthetics and special footwear for children with disabilities.

Valencia, a confectionery maker, has not only treated Ukrainians to sweets for eight years: it has also created a large number of jobs in Slavyansk, Donetsk Oblast. Every day, the company’s 73 employees make cakes, cookies and other delicacies.

Valery Yevtushenko, the owner of a company called Mega Drone, started his business in Donetsk, but because of the conflict in the region he moved to Lviv. In this other city the entrepreneur put together a new team, which now consists of seven people. The company’s main clients are in the farming sector. The company’s drones can accurately map an area of 1,000 hectares in two hours.

Severodonetsk-based company “Spetstent” launched a business on the production of polyvinyl chloride fabrics and making tents for trucks and vending booths. They have commercial orders from all over Ukraine and from abroad.

Some real business giants also took part in the event: the Donmet plant, a welding torch maker, has been on the market for 28 years, and sells its products in 14 countries around the world. Over its period in business, the company’s owners have forged over 400 trading partnerships around the world, and served more than 20,000 customers.

Creation of salt rooms, production of women’s clothes and ceramics in Donetsk Oblast, and hand-made goods, printing companies, bee farms in Luhansk Oblast, real dynasties and family businesses are all the true soul of small- and medium-sized business in Ukraine.

All the expo participants and 250 micro, small and medium businesses from Donetsk and Luhansk oblasts are compiled in the online catalogue on the East Expo 2018 website. Some 70 per cent of the companies at the current expo had participated in the previous East Expo in 2017 and around 20 per cent of them had received business support grants from UNDP.

Since 2015, UNDP, with the support of its international partners, has provided grants to start or develop small businesses. During this time, about 650 businesses were supported and over 3,000 jobs were created in Donetsk, Luhansk and other Ukrainian oblasts affected by the conflict.

East Expo 2018 was organized by the United Nations Development Programme with financial support from the U.S. Embassy in Ukraine and the governments of Japan and Poland, in partnership with Lviv Regional Council, the Lviv Chamber of Commerce and Industry, and the Lviv, Donetsk and Luhansk Regional State Administrations. 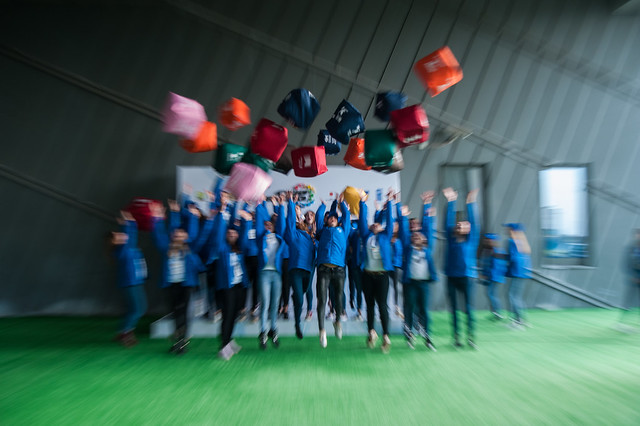