The newly constructed Administrative Service Centre (ASC) was officially opened in Sloviansk, Donetsk region, on December 5, 2018. The Centre was constructed and fully equipped with financial support from the European Union under the Recovery and Peacebuilding Programme. The opening of the centre also marked the official launch of the new phase of the “EU Support to the east of Ukraine – Recovery, Peacebuilding and Governance, 2018-2022” project, to be jointly implemented by four agencies: UNDP, UN Women, the United Nations Population Fund (UNFPA), the Food and Agriculture Organization (FAO) as part of the UN Recovery and Peacebuilding Programme funded by nine donor-partners.

The ASC is expected to provide around 200 administrative and social services to more than 200,000 residents in and around Sloviansk. The total cost of the project reached USD 510,000, with local budget contributions of USD 88,000.

“The Centre will contribute to making the operations of local authorities more open, transparent and better suited to the needs of residents, which is a key factor in the success of the decentralisation processes the EU is supporting in Ukraine. As a result of our support, local people in Slovyansk will be better and faster served by their local authorities,” stated Annika Weidemann, Deputy Head of the Delegation of the European Union to Ukraine.

The ASC has all the necessary facilities and resources, including furniture, equipment, a data server room, and most importantly, competent and trained personnel to ensure the highest quality services. Digital suitcases – mobile devices designed to render administrative services outside the Centre – were also transferred to the ASC to ensure the accessibility of available services to residents with reduced mobility. Now persons with disabilities, mothers with children, and the elderly in remote areas are only one phone call away from the Centre. The Centre’s staff can now render the services they need by visiting them at home with these digital suitcases, which contain a laptop loaded with specialised software, an ID-card reader, a scanner, a printer, a camera and a modem.

The ASC is also equipped with a ramp, widened doorways, bathrooms with handrails, as well as braille signs for the visually impaired and electronic queue management and payment systems to increase service volumes and improve staff efficiency.

The EU is at the forefront of supporting the ongoing decentralisation reform process in eastern Ukraine, with a strong focus on improving the provision of local public services.

The opening of this Administrative Service Center is making a difference towards improving the well-being of the conflict-affected population of both Donetsk and Luhansk regions. A total of 14 UNDP-supported Centres are already rendering services to more than 170,000 people,” said Janthomas Hiemstra, UNDP Ukraine Country Director.

Background information: The “EU Support to the East of Ukraine – Recovery, Peacebuilding and Governance, 2018-2022” project aims to strengthen community security and social cohesion, support the economic recovery of conflict-affected communities, as well as further the implementation of the decentralisation and healthcare reforms in government-controlled areas of Donetsk and Luhansk regions.

The Recovery and Peacebuilding Programme (RPP) addresses priority needs in eastern Ukraine after armed conflict erupted in the spring of 2014. It is implemented by four UN agencies: the United Nations Development Programme (UNDP), UN Women, the United Nations Population Fund (UNFPA) and the Food and Agriculture Organization (FAO). The target areas are five regions of Ukraine: Donetsk, Luhansk, Kharkiv, Zaporizhia and Dnipropetrovsk regions.

The Programme is supported by nine international partners: the European Union, the European Investment Bank and the governments of Denmark, the Netherlands, Norway, Poland, Sweden, Switzerland, and Japan. Its total budget for 2019-2022 is over USD 50 mln. 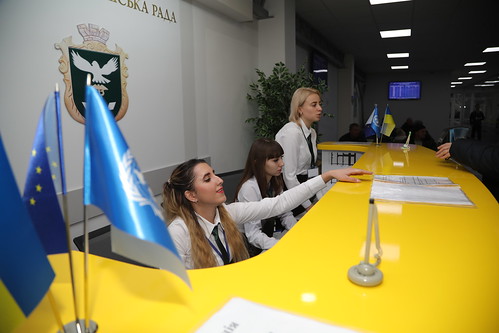