TRUSKAVETS, Lviv Oblast 9 December 2022 — When veterans return home from active duty they often experience a variety of stress-related disorders and challenges in reintegrating from the military to the community. Facilitating their reintegration, transition, readjustment, coping, and community integration is a societal priority for the Government of Ukraine. In an effort to strengthen the capacity of the Government and civil society to respond to the needs of veterans effectively, the United Nations Development Programme (UNDP) in Ukraine is actively cultivating partnerships with international and national partners to ensure a gradual and non-traumatic return of veterans to civilian life.

To this end, UNDP in close cooperation with the Folke Bernadotte Academy (FBA) with the financial support of the European Union and the Government of the Kingdom of the Netherlands recently organized a three-day training course on supporting the reintegration of veterans. Professionals who are involved in the implementation of national and international policies aimed at strengthening the reintegration processes of Ukrainian veterans joined in the training.

Frederik Coene, Head of Cooperation at the EU Delegation to Ukraine, said Ukraine already has extensive experience in the field of reintegration because it has been doing this since the conflict in eastern Ukraine started in 2014. “We have to help veterans reintegrate economically, socially and psychologically into their communities, to which they will soon return,” he said. “This training course sets the right direction for achieving this goal.”

Christophoros Politis, interim UNDP Deputy Resident Representative in Ukraine, said it is critical to have an informed discussion with all stakeholders to make sure the reintegration is carefully and effectively planned and starts before war ends. “The war has taken a toll on everyone, and particularly on Ukraine’s veterans,” Politis said. “It’s our collective duty to create an enabling environment to ensure veterans can benefit from the well-developed, and, most importantly, inclusive infrastructure that we will help put together for them so that they can fully reintegrate and gradually recover.”

Stefan Åström, Head of the Disarmament, Demobilization and Reintegration Unit at the Folke Bernadotte Academy, said early planning of veterans' reintegration processes is very important. “When we worked on this course, we were guided by the goal of creating effective solutions that will be useful in Ukraine right now and lay a solid foundation for Ukrainian professionals to start their work with veterans,” he said. 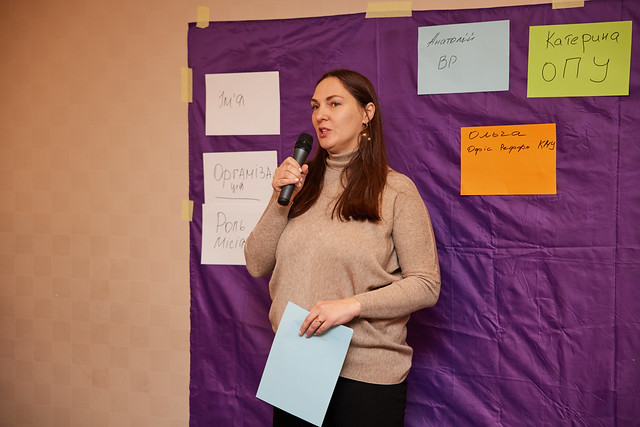 The Future of Government Awards has named Ukrainian Deputy Prime Minister and Minister of Digital Transformation Mykhailo Fedorov as “Digital Innovator of the Yea...

Ensuring the Right to Information in the War-Setting in Ukraine

A presentation of the results of monitoring and a training event on ensuring rights to information under martial law were held in Ivano-Frankivsk with the support...

UNDP and partners supported network of more than 50 school psychologists to receive modern tablets with an innovative app to work with people affected by the war.