To mitigate the devastating impact of climate change on people, the environment and the economy, the Republic of Moldova will set more ambitious targets for reducing greenhouse gas emissions. According to its first National Determined Contributions (CND) to the Paris Agreement, the Republic of Moldova committed to unconditionally reduce emissions by 64% compared to 1990, and by 78% in the case of international financial and technical support. However, these targets are not sufficient to maintain global warming below the 2°C rise in temperature compared to the pre-industrial period.

The EU4Climate project, funded by the European Union and implemented by UNDP, supports the Eastern Partnership countries, including the Republic of Moldova, in developing low emission development strategies by 2050. This vision is discussed at a regional workshop, held in Chisinau, during the period 15 -17 October 2019. The event is attended by representatives of the governments of the six Eastern Partnership member countries (Armenia, Azerbaijan, Belarus, Georgia, Republic of Moldova and Ukraine), as well as representatives of the European Commission, EU Delegation to the Republic of Moldova, UNDP, the Secretariat of the Energy Community, the European Bank for Reconstruction and Development, other development partners.

"The European Union is a front-runner in addressing climate change and aims for Europe to become the world's first major economy to go climate neutral by 2050. As climate has no frontiers, such an ambitious objective is achievable only with the support from the society as a whole. I would like to strongly encourage each of one of you to join the efforts of the EU and fight climate change together, to create a better future for our children and future generations," said Marco Gemmer, the Head of Operations of the EU Delegation to the Republic of Moldova.

Even though the countries of Europe and Central Asia are responsible for only 1.17% of global greenhouse gas emissions, given that about 80% of the energy consumed by these countries comes from fossil fuels, they are encouraged to invest in renewable energy sources.

“Our country has recognized the importance of the complex issue of climate change in a global context and has made commitments as a developing country. We plan to announce until February 2020 more ambitious targets for reducing greenhouse gas emissions at national level, as part of our updated National Determined Contribution, targets which we will then integrate into the Low Emissions Development Strategy by 2030 and its implementation plan by the end of 2020,” stated Georgeta Mincu, Minister of Agriculture, Regional Development and the Environment.

The workshop presents the experiences of countries that have already developed long-term strategies for low-emission development and decarbonisation of the economy. Instructions on the elaboration of integrated national plans in the field of energy and climate, according to the requirements of the member countries of the Energy Community are presented.

"The EU4Climate project will guide the Eastern Partnership countries to meet their commitments made under the Paris Agreement, will become a powerful platform for exchange of experience and best practices between governments and will intensify cooperation with the European Union, to take over its ambitious agenda in climate change field," said Andrea Cuzyova, Deputy Resident Representative of UNDP Moldova.

The European Union aims to become carbon-neutral by 2050, and Eastern Partnership countries are encouraged to align national laws with EU policies to combat climate change more effectively. Long-term low-emission development strategies involve innovative approaches and the establishment of targets beyond what is currently realistic. Considering the evolution and the cost reduction of technologies in the last 30 years, the renewable energy becoming competitive in price with the fossil fuels, by 2050 many of the current barriers could be overcome. However, in order to achieve these goals, countries will have to change their development paradigm, incorporating climate priorities into sector policy documents and involving the whole society in the process. 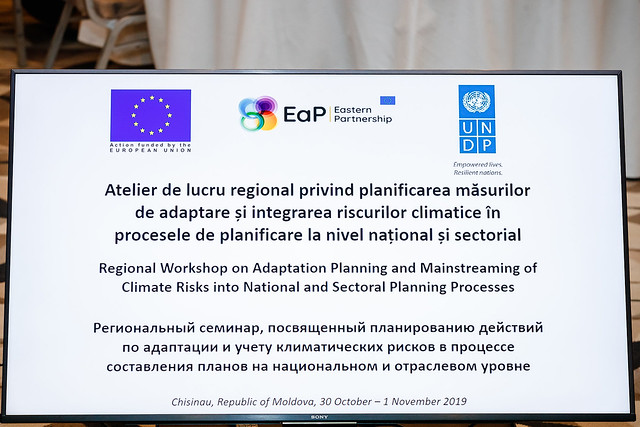 The Placement Center from Sculeni will use photovoltaic energy, thanks to the support of UNDP

The Placement Center for Adults and Older People from Sculeni village, Ungheni district will use photovoltaic energy to contribute to ensuring decent living condi...

UNDP and GEF support the revitalization of the Prut River's ecosystem

Over the next five years, multiple actions will be taken to ensure the ecological integrity of key wetlands in the Prut River basin, ensuring the revitalization o...

The United Nations Development Programme (UNDP) has launched today a project that will help strengthening the Moldovan Government’s capacity for a sustainable man...

In Moldova, severe droughts caused annual losses of $19 million a year, during 1996-2004. The current total cost of inaction regarding adaptation to climate chang...

What can we do with leftover coffee? Moldovan and Polish companies partner to upcycle spent coffee grounds

In Moldova’s capital city, Chisinau, about 2,000 to 3,000 kilograms of coffee waste end up in landfills each month, adding up to greenhouse gases emissions. A loc...