Turning The Tide on Marine Debris

Teams snorkelling for debris dumped by Hurricane Dorian, were transferring a piece of sheet metal to their boat, when an octopus jumped in and scuttled for cover. Minutes later, another wrapped its tentacles around the arm of Friends of the Environment intern, Makayla McIntosh.

The team had disturbed their new habitats - hidden within construction material cast into the sea in 2019 by Hurricane Dorian’s 185 mile per hour winds.

It ends well for the two creatures: The team finally located the elusive octopus, and Makayla was able to unwrap the other from her arm. Both were restored to the sea, unharmed, in compliance with a compassionate rule in their operating procedures. Later, the crew returned below water to clear away the rest of the captured habitats.

This is life in Abaco's territorial waters in 2021, two years after a category five hurricane.

The equivalent of 936 tons, or 1.8 million pounds of marine debris generated by Hurricane Dorian has been collected in removal efforts, guided by a UNDP-funded assessment report. This estimation does not include cars and boats.

Diverse items – some organic, some hazardous – are displaced on land and sea, where they can endanger human life, eco systems and marine life. Unsuspecting creatures make these items their new habitats.

The octopuses provided amusing interludes in an otherwise serious undertaking.

Removal of marine debris is a critical intervention in the wake of a hurricane.

Removal of marine debris is particularly critical in Small Island Developing States (SIDS) that rely on tourism and their natural assets, for economic growth. 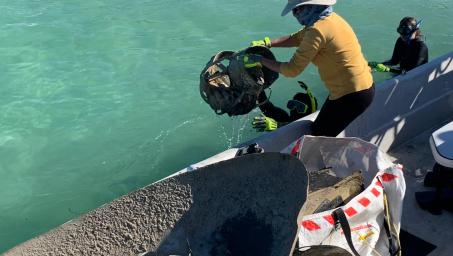 A total of 11,669 cases have been referred to the village courts from the regular courts during this period and more than taka 150 crore has been collected as com...

It is obvious that people must always be at the centre of development and development must be inclusive, equitable and sustainable to the benefit of all. Targeted...