Pedigreed bees instead of imported ones

Beekeeping can be a sensitive business. Around the world, there has been a dramatic dying off of bees in large numbers, due to environmental and chemical factors.

In the Sary-Be canyon of the Osh oblast of Kyrgyzstan, local beekeepers have created a buffer zone for the development of bee breeding. This zone is a protected section to develop successful breeding, preserve the species that in the apiary of queen bees and bee colonies, and improve the marketability of the resulting bee products. The zone will also help in the conservation and breeding of pedigreed bees, prevent the spread of diseases and parasites, and improve the quality of honey produced here.

It is prohibited to import other honeybees, bee colonies, and queens of unknown origin within the 20km radius of the buffer zone. The first such zone in Kyrgyzstan, it was established as a pilot, and opened in April of this year as part of measures to build and strengthen the production of honey in the Kara-Kuldzha region.

“In this buffer zone, there are six operating beekeepers, who, in addition to honey production, sell purebred queens, since we are receiving requests for them from other oblasts. Now Kyrgyz beekeepers have an opportunity to buy pedigreed bees at an affordable price…Before, importing queens cost beekeepers a tidy sum,” said beekeeper Emil Sydykov, Head of the “Too Kapchygai baly” Community unit. 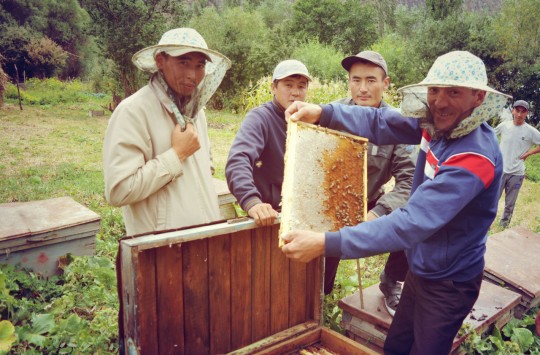 The buffer zone is a joint achievement of UNDP’s "Trade Support" project in the Osh oblast and partners AgroLead NGO and Too Baly Community unit.

“We are pleased to announce this is the first such a buffer zone in the Kyrgyz Republic. In the near future we plan to create other buffer zones in separate areas but with other breeds of bees,” said Kayirkul Kazylaeva, AgroLead project manager.

UNDP’s “Aid for Trade” project conducts a number of activities for the production of quality honey to enter the external and internal markets of the Kyrgyz Republic.

“UNDP has conducted a series of trainings and consultations for pilot beekeepers in Kara-Kulja region and a demo day for the opening of the buffer zone. It is a platform for informing the local population about the creation and development of this area,” said Azamat Kasymov, Coordinator of UNDP “Aid for Trade” Project in Osh oblast.

This project was initiated by UNDP in partnership with the Ministry of Economy of the Kyrgyz Republic, the Chamber of Commerce of the Kyrgyz Republic and the State Enterprise of “Centre of one window principle in foreign trade” in 2014. The main objective of the project is to support domestic economic growth through the promotion of trade and strengthening the competitiveness of manufacturers in the country. The aim is to reduce poverty and improve the livelihoods of people in Batken, Naryn, Osh and Jalal-Abad oblasts, where the biggest level of poverty exists according to statistics. At the micro-level, the project is working to support farmers, small businesses, and cooperatives that produce agricultural products, as well as manufacturers of handicraft goods.