Crown Prince Haakon Magnus of Norway was appointed a UNDP Goodwill Ambassador in 2003 and has been committed toward efforts to end global poverty.

The Crown Prince has taken several field visits on behalf of UNDP to experience firsthand the organization’s work around the world, including in Timor-Leste, Zambia, Haiti, Nepal, Botswana, Tanzania, Cambodia, Sierra Leone, Guatemala, Burundi and Mongolia.

"If we really mean that every human being is created equal, we cannot rest as long as millions of people are living in extreme poverty," the Crown Prince said. "To make progress we need organizations like UNDP [who] make a difference in the lives of individuals, in the development of societies, and ultimately for our common world."

In his capacity as Goodwill Ambassador, Crown Prince Haakon has contributed to three Human Development Reports, published annually by UNDP. His Royal Highness has also spoken at several high-profile events, including the Kapuscinski lectures, the International Peace Institute and UNDP’s Global Goals Gala held in 2016 in New York to mark the UN agency's 50th anniversary.

The Crown Prince plays a key role in raising awareness and mobilizing support for the Sustainable Development Goals, also known as the Global Goals, with a particular focus on ending poverty by 2030.

Check out some of the Crown Prince's compelling video messages in the video section below.

In his role as Goodwill Ambassador, Crown Prince Haakon focuses on closing the gap between the rich and the poor worldwide. 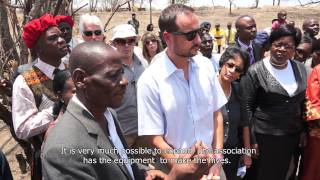