Kyiv, 7 December 2021 – To cut its greenhouse gas emissions, the United Nations Development Programme (UNDP) Country Office in Kyiv, Ukraine has upgraded its rooftop with a solar panel installation to provide more green power for the building.

The new solar power installation – 22 solar panels rated at 380 Watts each – can generate 7 kW of AC power, producing a total saving of U.S. $1,676 each year. By generating energy from a renewable resource, it is estimated that the project will reduce the office’s carbon footprint by almost four tons of CO2 per year.

UNDP in Ukraine previously operated a set of solar panels to augment its power supply to the country office.

In 2020, UNDP Ukraine won a grant to install a new solar power system from the organization’s Greening UNDP Moonshot Facility – an internal initiative launched in 2029 with an ambitious but doable strategy to reduce the organization’s greenhouse gas emissions by 25 percent before 2025 and 50 percent by 2030. The programme also is taking steps to implement the best-of-class waste management practices at all UNDP premises while also minimizing the use of natural resources.

Andrew Hudson, the head of the Water and Ocean Governance Programme at UNDP, said that over the last two years the Moonshot has financed 58 projects – mostly renewable energy and energy efficiency – with $3.24 million in funding from the corporate Facility, Regional Bureau and Country Offices’ sources.

“These projects in total have reduced UNDP’s GHG emissions by 1,575 tons per year, an 8 percent reduction in UNDP’s global carbon footprint from electricity, Hudson said. “Equally important, the Moonshot saves UNDP significant amounts of money: these 2020 and 2021 investments have saved the organization over $600,000 per year in operational costs.”

“It is walking the talk, leading by example, and a step towards creating Smart Facilities to build local capacity and inspire a movement in the region,” Nyathi said.

“Tackling climate change doesn’t mean sacrificing our modern lifestyles,” Kochan said. “With modern technologies, which are increasingly becoming more efficient and cheaper, we can enjoy all the benefits of a reliable electricity supply and transport with low running costs – with the added benefit of reducing our impact on the climate. I’m proud that UNDP in Ukraine is showing the way with this initiative.”

Other UNDP initiatives here in Ukraine include operating as a paperless office since 2016 through full electronic documentation, and the use of e-signatures, promoting renewable energy use, and improving waste management.  Furthermore we are promoting the use of electric bicycles and are setting up a charging station for electric vehicles.

UNDP has adopted ambitious Moonshot targets, committing wholeheartedly in the programme to reduce greenhouse gas emissions from global operations by 25 percent by 2025 and 50 percent by 2030. Replicating and scaling existing initiatives using lessons learned and enabling even more ambitious transformation will allow UNDP operations to run in an environmentally sustainable manner consistently across the organization. The Greening UNDP Moonshot Facility was set up to support this transformation by incentivizing contribution to the Moonshot targets. Several actions have been planned, including reduction of greenhouse gas emissions from travel to effectively achieve the target, and additional measures may be suggested by offices applying for project funding. 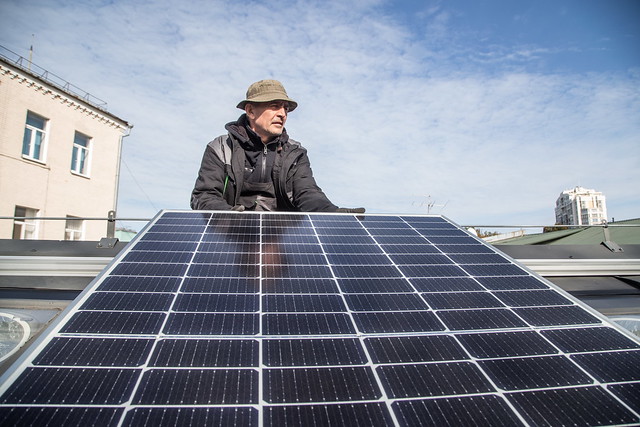 One of the key elements of the Green Deal is green diplomacy, which is aimed at synchronizing of the best practices and legislation with the requirements of the E...