National Mine Action Centre gets new equipment, with support of Canada and UNDP

The special demining equipment, handed over in ceremony in Chernihiv, will be essential for conducting demining works and ensuring quality control of the cleared areas, officials say

Chernihiv, Ukraine, 6 October 2021 – Ukraine’s National Mine Action Centre received demining equipment from the United Nations Development Programme and the Canadian government at a handover ceremony on 6 October, including large loop detectors, underwater and land mine detectors, diving equipment for demining, and gadgets for conducting monitoring and quality control.

The ceremony took place at the premises of the State Special Transport Service (SSTS) of the Ministry of Defence, where the National Mine Action Centre is located in Chernihiv, Ukraine.

The equipment received by the centre, together worth U.S. $90,000, is essential for supporting governmental bodies in demining areas of Luhansk and Donetsk oblasts contaminated by mines and other explosive ordnance. The National Mine Action Centre, which is in the process of being established, will be also furnished and supplied with office equipment worth U.S. $40,000.

Speaking at the ceremony, Canadian Ambassador to Ukraine Larisa Galadza said demining work was essential for building peace in the conflict-affected regions of Ukraine.

“Removing mines is an incredible act of bravery but also of caring and of hope,” Ambassador Galadza said. “It demonstrates an overwhelming level of care and concern for your fellow citizens. You care that they can step outside their front door without fear, that they can harvest their fields freely and they can send their children to school without worry.”

“With this equipment, Ukraine’s deminers will play a pivotal role in restoring security and ensuring a return to normal life for communities up and down the ‘line of contact.’”

In her opening speech, UNDP Resident Representative to Ukraine, Dafina Gercheva, said that while the dangers that the coronavirus poses shouldn’t be underestimated or overlooked, the civilian population in conflict-affected eastern Ukraine also continues to face the deadly threat of landmines and unexploded ordnance.

“For the safe and efficient demining of areas contaminated as a result of the armed conflict, high-quality modern equipment is thus a fundamental requirement,” Gercheva said. “UNDP under the UN Recovery and Peacebuilding Programme, with funding from the Canadian government, has been providing critical support for the establishment of the National Mine Action Centre here in Chernihiv. In that regard, the batch of equipment that we’re officially handing over today will be used by professional deminers to clear mine-contaminated areas in conflict-hit regions of Ukraine, and to conduct quality control of the cleared lands.”

“The work we’re doing with the support of our Canadian partners is yet another important step towards long-lasting peace and security for the people of Ukraine,” Gercheva added.

After the handover ceremony, the delegation had an opportunity to get acquainted with the work of both SSTS and the National Mine Action Centre. Deminers showed their training facilities and explained the essentials of conducting safe and high-quality demining.

“The received equipment will allow us to survey and remove explosives from bridges and roads in eastern Ukraine faster, so that repair work can be done, and infrastructure restored,” said Oleksandr Kolgan, head of Diving Operations of the SSTS.

Whereas the SSTS conducts demining, the Mine Action Centre will be in charge of quality control. This process guarantees that there are no mines or unexploded ordnance left after the demining work is conducted by mine action operators. Only then can the land be released and handed over to its owners and users. The very same equipment should be used to conduct quality control, thus, UNDP has supplied detectors for both clearance and quality control.

Eugene Biriukov, the Head of the Mine Action Centre, emphasized that the demining process in the east has been complicated by various external factors.

“Regardless of these, we cannot postpone demining,” Biriukov said.

“It has to be done now to ensure there are no risks from mines and other explosives to civilians. The Mine Action Centre, being in the process of development, wants to cooperate with our international partners and appreciates their support in achieving this goal.”

The demining equipment was transferred under the UN Recovery and Peacebuilding Programme, with financial support from the Government of Canada. 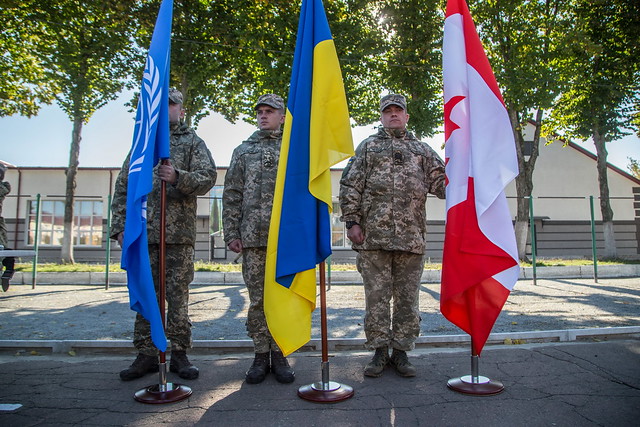