16 May 2018, Severodonetsk, Luhansk Oblast – A delegation from the Embassy of Japan visited conflict-affected areas in eastern Ukraine on May 15-16 to assess the recovery and development projects implemented by the United Nations Development Programme (UNDP) and the United Nations Children’s Fund (UNICEF) with financial support from the Government of Japan.

Since 2014, the Government of Japan has been supporting initiatives implemented by UNDP and UNICEF in Ukraine in response to the humanitarian crisis in Donetsk and Luhansk oblasts.

The delegation visited the town of Svatove, Luhansk Oblast, where they opened a Social Centre for Child Development rehabilitated by UNDP with the sponsorship from the Government of Japan (USD 354,000). The facility provides social and development services to children of up to five years of age, as well as information and consulting services for internally displaced persons with preschool children. The centre also provides rehabilitation care to children with disabilities.

“In that regard, I would like to underline the important contributions made by our international development partners, particularly the Government of Japan, and support from Luhansk Regional Administration and Svatove city authorities in these recovery efforts. Thanks to our joint work, this centre will become a second home for these children, and we are happy to make it safe and comfortable. Helping the most vulnerable groups, especially children, is among the top priorities of UNDP in Ukraine,” Munteanu added.

In 2015-2018, the government of Japan allocated to UNDP USD 19.4 million for the restoration of critical infrastructure and to support employment and entrepreneurship among conflict-affected residents of eastern Ukraine, helping over 4.5 million people secure access to social services, and boosting local businesses.

The delegation also visited a secondary school in Vrubivka, Luhansk Oblast, to handover early development kits for the youngest children, provided by UNICEF with support of the Government of Japan.

Located just 20 kilometres from the ‘contact line’, this educational institution has experienced several incidents of heavy shelling. Thanks to the funding from the Government of Japan, in 2016-2017, the school received new furniture sets, sport equipment and education kits for all children. The schoolteachers also participated in the Sport for Development workshops using sport activities to promote tolerance, prevent discrimination and improve gender equity among children.

“The conflict in eastern Ukraine is taking a devastating toll on children and educational system in particular,” said Gaspar Bergman, Head of Field Offices in Eastern Ukraine, UNICEF. “We’re grateful to the People and Government of Japan for their generous and critical support that allowed to reach the most vulnerable ones and bring much needed aid to schools like the one in Vrubivka.”

Since 2014, the Government of Japan has provided over USD 9 million to UNICEF to support the wellbeing of conflict-affected children and their families in eastern Ukraine. This enabled UNICEF to improve access to a safe education environment with adequate school supplies for at least 200,000 children, as well as ensure access to safe water and sanitation for over 1.5 million people in conflict-affected eastern Ukraine.

Children wearing Kimonos gave demonstrations of Karate, Judo and dance, and were given Origami and postcards with Japanese beautiful scenery in return.

Mr. Michio Harada, Deputy Head of Mission and Minister-Counsellor of the Embassy of Japan in Ukraine, said he hoped the ties between the area and Japan would continue to strengthen, and promised further aid.

“I’m pleased to visit the Social Centre for Child Development, and the Vrubivka school. I hope you will be strong by practicing sports, studying hard and being kind to your friends. In 2020, summer Olympic games will be held in Tokyo. I want you to practice hard to be part of games and see you in Japan.”

“I would also like you to discover Japanese culture, with our assistance. For example, Sakura is the heart of our culture. Each Sakura tree planted bears the Japanese people’s wish for well-being, happiness and peace for each child in Ukraine. I hope you will remember our friendship whenever you see Sakura blooming. I thank the Governor of Luhansk Oblast, UNDP, UNICEF and all of the people of the communities of Rubizhne, Vrubivka and Svatove. The government of Japan will continue its humanitarian assistance and recovery efforts for eastern Ukraine.”

During the official visit,  the delegation together with city authorities in Rubizhne, Luhansk Oblast, planted Sakura trees donated by the Japanese business community in Ukraine, as a symbol of sincere and long-lasting Japanese-Ukrainian friendship. 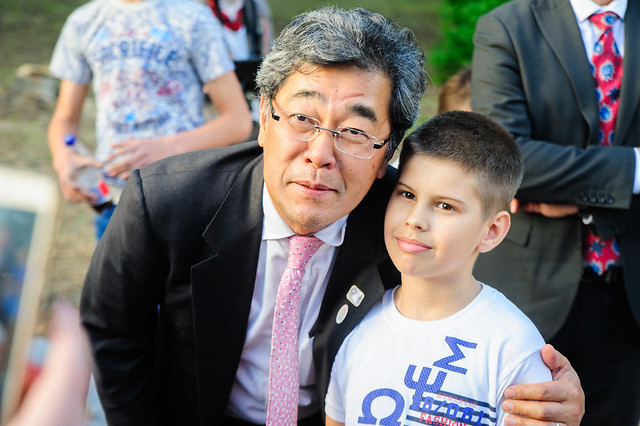