Svetlana, what are the goals and objectives of the new grant project "Exit of National Tuberculosis Programme of Turkmenistan from the Global Fund support by 2024" implemented jointly with the Ministry of Health and Medical Industry of Turkmenistan?

The Global Fund has been supporting the national efforts to control tuberculosis in Turkmenistan since 2010. Over the past 11 years, besides introducing the new methods of diagnosis and treatment of tuberculosis, huge efforts were made towards gradual transition to a full government financing of all grant activities.

Today, the grant covers only the most complex programme activities, while the entire TB control program is funded by the Government of Turkmenistan. The project "Exit of National Tuberculosis Programme of Turkmenistan from the Global Fund support by 2024" aims at completing the transition of all grant activities to a full state funding by 2024. Until then, the grant will continue supporting the diagnosis and treatment of the most drug-resistant forms of tuberculosis (so-called XDR-TB[i]). 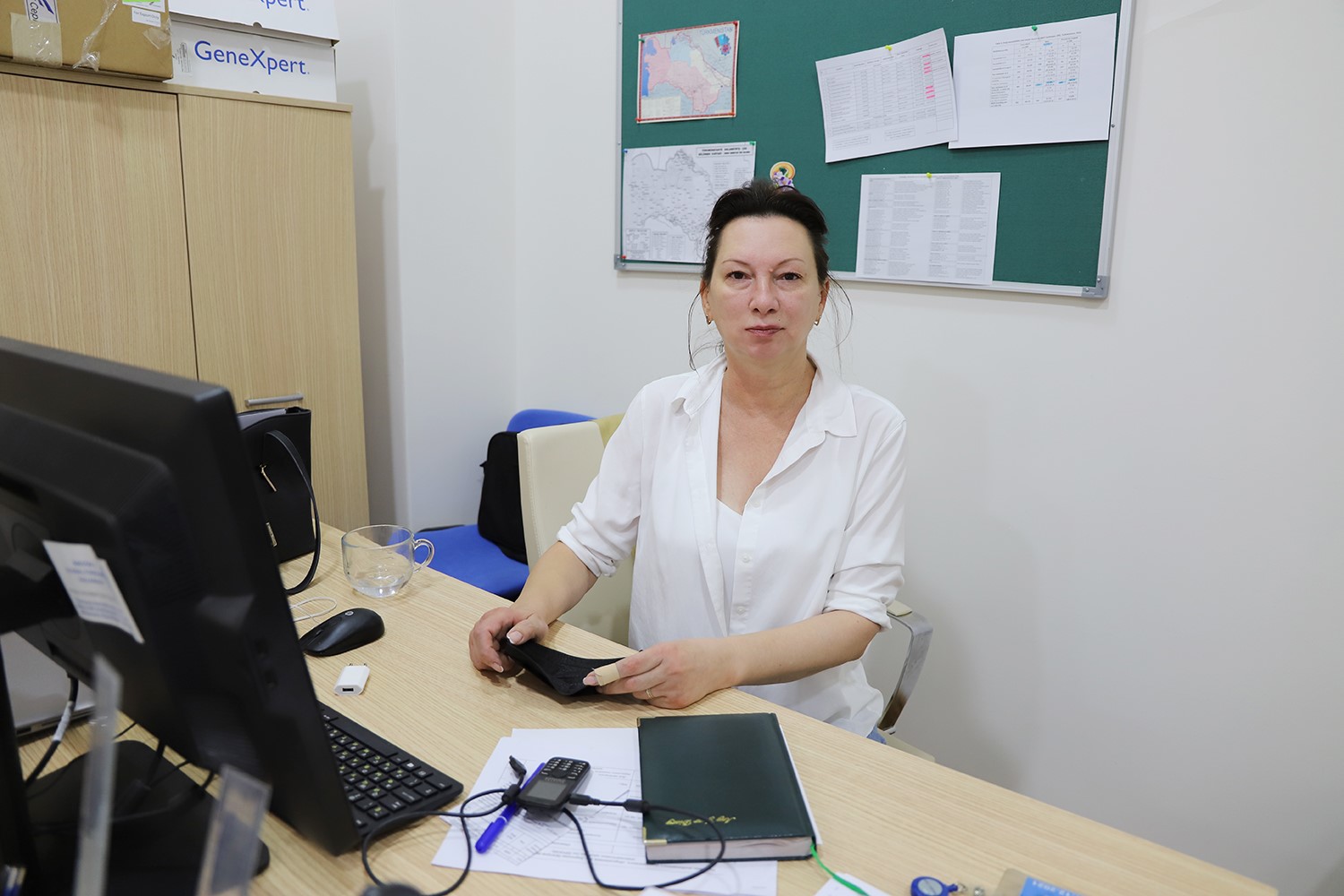 In addition, in line with the national digitalization policy, the project will work on introducing an electronic TB register in the country. The project activities will also include support to treatment adherence for patients, which is a part of a big comprehensive program aimed at ensuring that each patient not only starts, but also completes a full course of treatment until his full recovery. Training programs for doctors and nurses will continue with the involvement of international expertise. The grant entails cooperation with a laboratory in Germany to align the work of the local laboratory network with the international standards. This is only a small part of the planned work.

Svetlana, not many people know, but many are interested in learning about the history of tuberculosis: what is tuberculosis, when did it appear and who first announced the discovery of the bacteria that causes tuberculosis?

Tuberculosis (from Latin tuberculum - "tubercle") is an infectious disease, one of the most widespread in the world. The disease caused by various types of mycobacteria from the Mycobacterium tuberculosis complex group (better known as Koch's bacillus) can develop in both humans and animals, affecting the lungs and other organs.

Tuberculosis accompanies people throughout the course of human history. For instance, signs of tuberculosis were found in the remains of a man who lived 5,000 BC. According to the WHO, about 10 million people in the world contract tuberculosis every year.

For a very long time, tuberculosis was considered as a hereditary disease, and the recommendations for treatment were limited to spending more time outdoors and having healthy nutrition. For many years, the causative agent of the disease was not known.

In 1882, after seventeen years of research Dr. Robert Koch discovered under a microscope the Mycobacterium tuberculosis (Mtb), the bacteria that causes tuberculosis. The bacteria was named in honor of its discoverer Bacillus of Koch, and since the mycobacterium in its appearance resembles a stick, it is sometimes called a tubercle bacillus.

Thirteen years after the discovery of Koch, Wilhelm Roentgen discovered rays that could diagnose tuberculosis. Both scientists, Robert Koch and Wilhelm Roentgen, have received Nobel Prizes. To this day, X-ray and sputum examination remain the basis for TB diagnosis, but of course with the use of contemporary technologies.

What methods of TB diagnosis exist today in the country with the help of the project?

Today, it is hard to imagine that until recently the local TB laboratories used only sputum smear microscopy and manual cultures for the detection of Mtb. The TB laboratory diagnostics took up to 10-12 weeks. Currently, there are several highly sensitive, rapid and automated methods for TB diagnosis, including the methods to determine the susceptibility of Mycobacterium tuberculosis to antituberculosis drugs. Like any living organism a mycobacterium tuberculosis tries to survive and adapt, thus it develops resistance to the drugs currently used for TB treatment. Therefore, once the disease is diagnosed it is important to conduct a drug-susceptibility testing to determine which treatment will be effective for each patient. 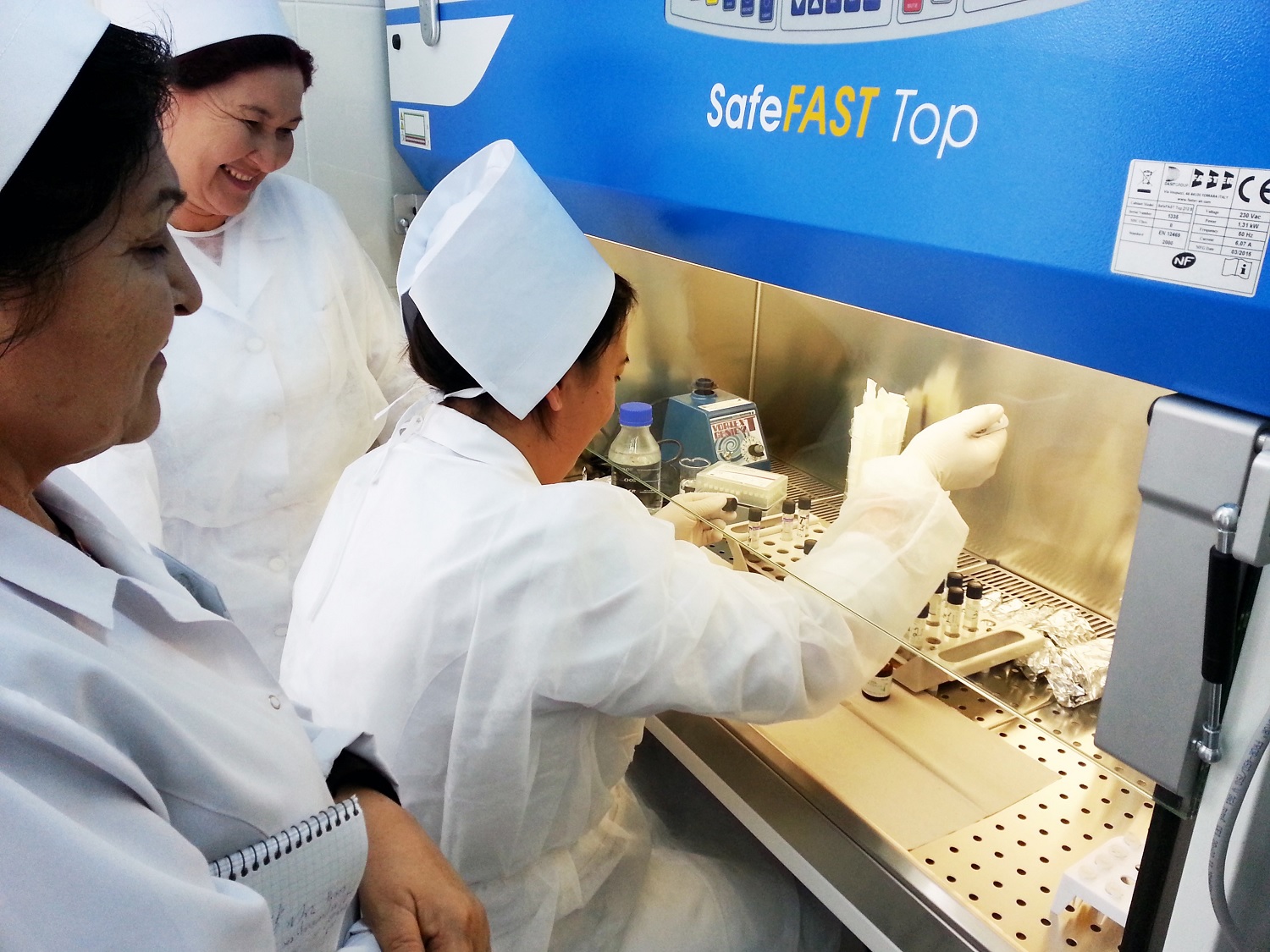 Turkmenistan is carrying out the most modern laboratory diagnostic methods recommended by the World Health Organization. Moreover, these new methods are available in all velayats of the country. With the support of the grant and funding of the Government of Turkmenistan the TB laboratories in Ashgabat and in other parts of the country use such molecular genetic testing methods as GeneXpert and LPA, as well as conduct a Drug susceptibility testing of Mycobacterium tuberculosis against almost all anti-TB drugs using the BACTEC MGIT. Now, the diagnosis of TB can be done within 2 hours and the treatment can be administered immediately. Nowadays, the GeneXpert is considered as one of the most innovative methods for TB and other infectious diseases diagnosis. 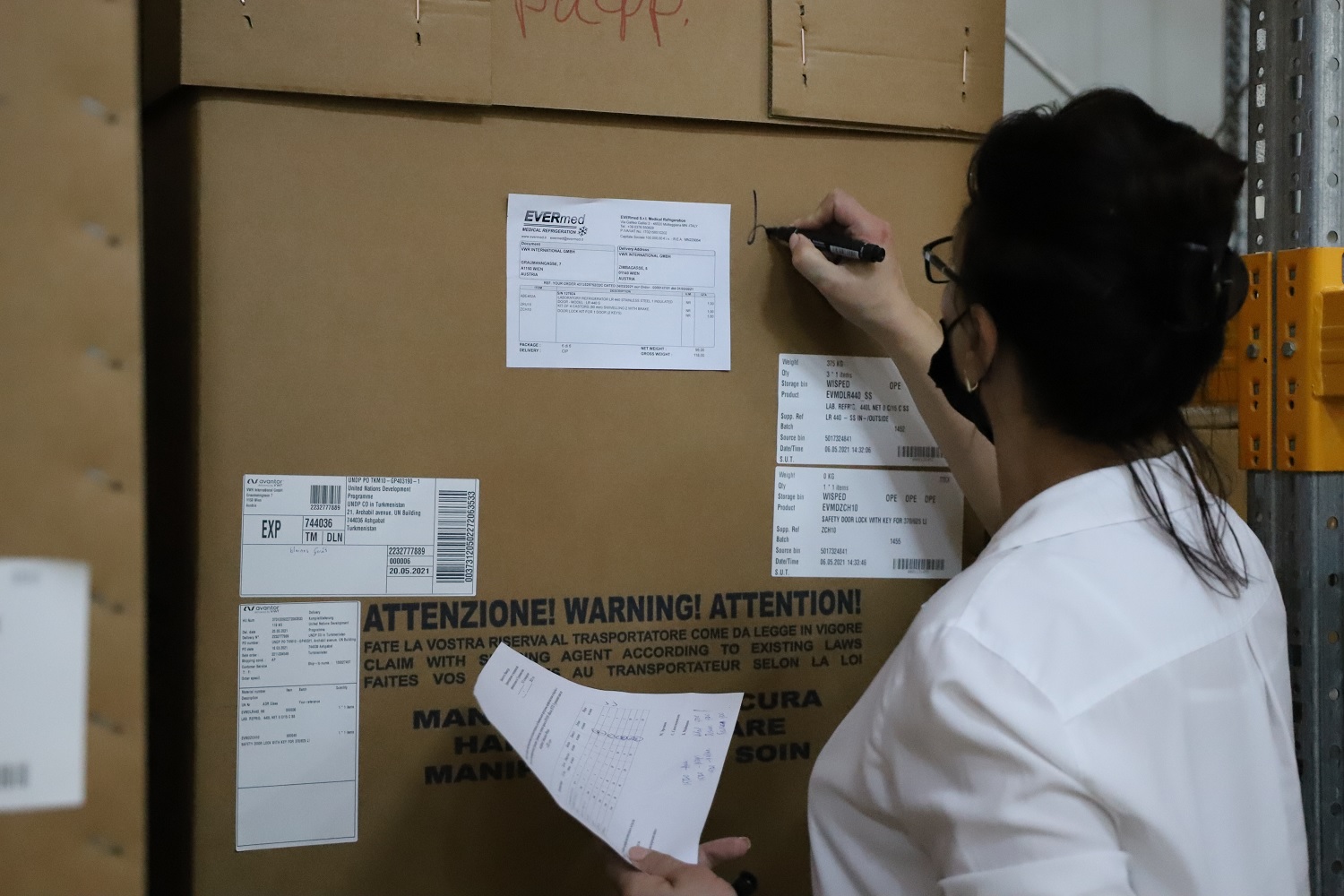 Could you please brief us on the key achievements of this joint UNDP project on control of tuberculosis?

In addition to introducing the innovative methods for diagnosing tuberculosis, the project focused on the treatment of drug-resistant forms of disease. It is worth mentioning that up until recently the world health system was using those antibiotics for treatment of TB that had been in use since mid-1950 and 1960s. Unfortunately, these old types of drugs became ineffective against resistant Mycobacterium tuberculosis.

Only in 2012, the first new drug to treat TB in 50 years, Bedaquiline, appeared making a huge breakthrough in the treatment of drug-resistant tuberculosis. This was followed by the release of another TB treatment medication- Delamanid. The world medicine does not stand still and every year more and more new effective drugs emerge.

In Turkmenistan, the treatment of drug-resistant tuberculosis is carried out with the use of innovative drugs Bedaquiline, Delamanid, Linezolid and Clofazimine. All treatment regimens are in accordance with WHO recommendations. Now the project plans to introduce a new drug, Pretomanid, which also proved to be safe and effective. 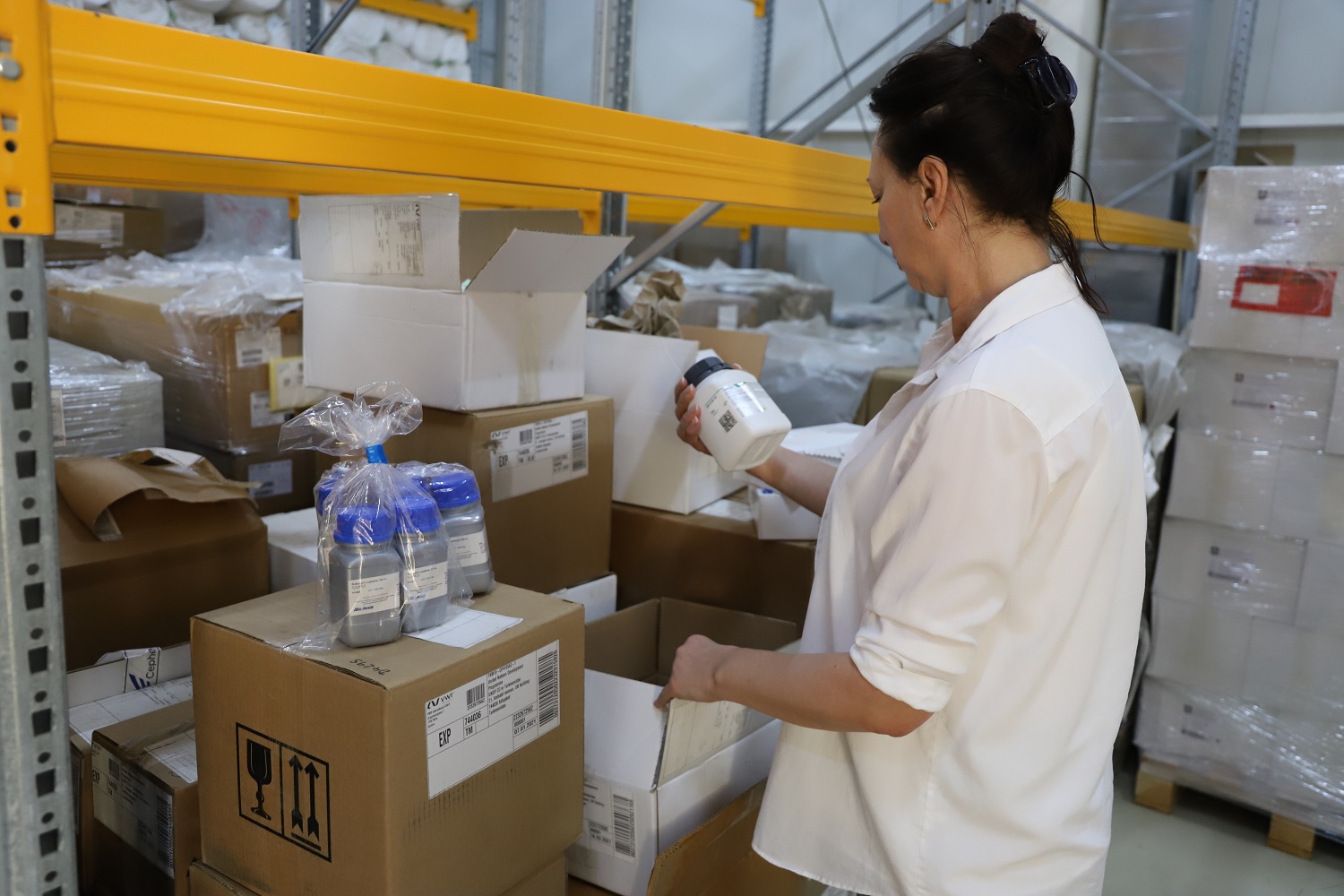 How to detect tuberculosis at an early stage? As a specialist what would you recommend if the first signs of disease emerge?

Tuberculosis among all nations has a similar meaning in its name. For example, in Turkmen it is “inçekesel”, in Russian “chahotka”, meaning to dry out, to be exhausted. A person loses weight, weakens, becomes exhausted, though this happens at a later stage of TB disease.

The early signs and symptoms of tuberculosis include coughing for two-three weeks or more, fever, weakness, and sweating. If you notice the first signs of tuberculosis, you should immediately contact your family doctor, who will direct you to a further medical examination: microscopy of sputum analysis, X-ray of the respiratory organs, etc. If the diagnosis of tuberculosis is confirmed, the patient will be referred to a tuberculosis dispensary for further examination and treatment.

What are the preventive measures to reduce the risk of being infected? How to protect ourselves and our family?

Tuberculosis is transmitted from an infected person to a susceptible person in airborne particles, called droplet nuclei, that is possible through coughing, sneezing, and talking. It is necessary to often ventilate the premises, means of transport, and practice a regular wet cleaning. A person who has signs of a respiratory illness should be examined and must always wear a mask. People around a sick person need to follow all precautionary measures.

Tuberculosis affects all age groups including children, adults and elderly people. This disease does not recognize people’s social status. TB occurs more commonly in people with a weakened immune system. A number of factors cause a weak immune system: inadequate nutrition, the use of such toxic products as alcohol, tobacco and narcotics, concomitant diseases (HIV-infected people are especially susceptible to tuberculosis, as well as the patients with gastric ulcer and duodenal ulcer and diabetes mellitus). The prolonged use of hormonal drugs may also increase the risk of becoming sick.

! I want to emphasize that tuberculosis is a curable disease, so the most important is not to waste time and seek immediate medical attention.

[i] More information about XDR-TB can be found at WHO website https://www.who.int/ru/news-room/q-a-detail/extensively-drug-resistant-tuberculosis-(tb)

The Government of Turkmenistan approved the updated Nationally Determined Contributions for the submission to the Council of the United Nations Framework Conventi...

Introductory meeting to launch a five-stage exercise called the Capacity Assessment of the Ombudsperson’s Office in Turkmenistan was delivered in a hybrid format....

On the occasion of the International Mother Earth Day, on 22 April, UNDP Turkmenistan, together with the Nature Protection Society of Turkmenistan and other natio...

UNDP enhances cooperation with the Government of Turkmenistan in digital transformation

Today UNDP Turkmenistan signed the Memorandum of Understanding with “Turkmenaragatnashyk” Agency under the Agency for Transport and Communications of the Cabinet ...