Restoring our Lands and Forests, Securing our Future 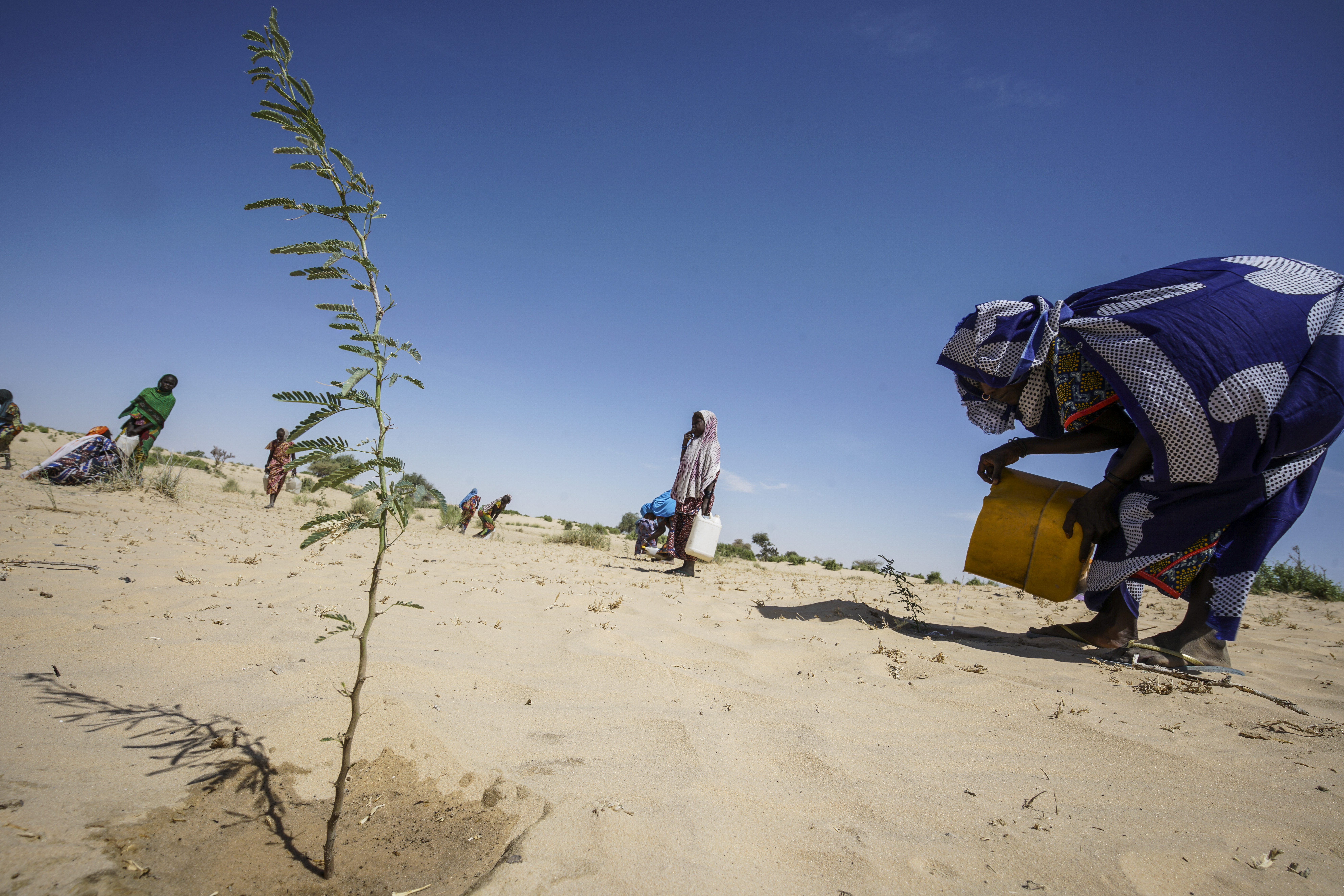 40% of the world’s 230 major watersheds have lost more than half of their original tree cover and more than 2 billion people lack access to reliable safe drinking water. Credit: UNDP.

As prepared for delivery.

There is perhaps no societal problem more wicked, more intractable and more tangled than the nexus of land and forest degradation, food security, water security and climate. As the recent TEEB for Agriculture and Food report notes, these issues are inordinately complex and interlinked.

Several global publications released in the past two years paint a picture of just how intertwined and vexing these challenges are, and together they paint an alarming portrait for our world’s future.

First, we have already degraded a major portion of the earth’s surface. The Global Land Outlook, published last year by the UN Convention to Combat Desertification, and FAO’s State of the World’s Forests, released last week, highlight key issues in land and forest degradation.

•    The Land report concluded that a significant proportion of land has already been degraded, especially in the last two decades. At least 1 out of every 5 hectares of the Earth’s vegetated surface already shows declining trends in productivity.
•    But that’s not all. Loss of biodiversity, coupled with intensified impacts from climate change, only exacerbate the health and productivity of land, in the form of unpredictable seasonal rainfall, increased water scarcity and floods, and extreme temperatures.
•    These trends have profound implications for the 2.5 billion people who depend on agriculture for their livelihoods,  more than 80% of whom farm on parcels of 2 hectares or smaller.  Roughly half of these farmers - 1.3 billion people - are trapped on ever-degrading agricultural land that is increasingly marginal, requiring more financial and chemical inputs, for diminishing returns.
•    These trends also have broader regional and global implications. Degraded land leads to decreased resilience of the world’s most vulnerable people, hundreds of millions of whom live on less than $2 a day, as well as to decreased food security for the world’s most food insecure regions.

Second, the Global Assessment Report on Forests and Water, the UN World Water Development Report, and The Nature Conservancy’s Beyond the Source report, all released this year, highlight just how direct and important the linkages are between intact ecosystems and water security.

•    Water shortages have profound impacts on our global food security, as 40% of our food is produced using irrigation.
•    Water shortages are also a driving factor in conflict and migration – it is no coincidence that all 15 of the world’s most war-torn countries  are facing moderate to severe drought.
•    3 out of 4 people worldwide depend on forests for their drinking water.
•    40% of the world’s 230 major watersheds have lost more than half of their original tree cover  and more than 2 billion people lack access to reliable safe drinking water.

Third, FAO’s Global Food Outlook, a forthcoming WRI publication on Creating a Sustainable Food Future, a recent report on eliminating deforestation from agricultural commodities, and the TEEB for Agriculture and Food report all showcase just how interdependent our food, forests and climate systems are.

•    Food production now accounts for more than a third of the earth’s arable land,  and irrigation accounts for more than 70% of all freshwater used for human use.
•    Current farming practices account for about a quarter of our global greenhouse gas emissions,  and are the primary source for nutrient runoff and toxic algal blooms around the world.
•    Agricultural expansion already accounts for 70% of tropical deforestation around the world, mostly for beef, soy and palm oil,  and with a rising middle class,  global demand for meat is set to increase by 45% by 2030.

So what are we to do? What is the answer to this tangled Gordian knot of land degradation, food and water security and climate change?

The answer, in a word, is restoration.

Restoration of land and forests promises to solve multiple global and local challenges at once. Here’s why.

•    Restoration is a natural solution for climate. Forest restoration, and carbon-positive agriculture, are largely overlooked, receiving just 2% of climate finance, and a fraction of the attention in the global climate discourse. Yet nature-based strategies, including restoration, provide more than a third of our climate emissions solution, including both mitigation and climate adaptation.  Ecosystem-based adaptation strategies are generally more cost-effective, durable and have more co-benefits than other strategies.
•    Restoration is a natural solution for water security. It has been estimated that over 3200 cities could significantly improve their water security – by 10% or more - through forest restoration measures, at a cost of less than $2 per person per year.
•    Restoration is a natural solution for food security. For example, a study  in 7 countries across 3 continents clearly shows how restoring forests and agroforestry systems directly improves the food security of small landholders, by diversifying crops, avoiding soil erosion, increasing water availability and improving pollination, among other benefits.
•    Restoration is a natural solution for poverty and livelihoods. More than 2.5 billion people depend on agriculture for their livelihoods. Restoration of land and forests promises to safeguard these livelihoods, and help bolster the economic wellbeing of the 797 million people who live on less than $1.90 a day, as well as the 3 billion people who live on less than $2.50 a day.  A recent report from UN Environment shows that for 42 of the poorest countries of Africa, the benefit of land restoration and conservation for the poor in terms of agricultural productivity is between 3 and 26 times greater than the cost of inaction.
•    Restoration is also a natural solution for peace and security. Over the next decade, an estimated 60 million people are at risk of being forced to move from degraded land within Africa.  At the same time, 330 million young Africans will enter the labor market. Investing in land restoration, such as UNCCD’s program on Security, Stability and Sustainability to create 2 million new jobs while restoring 10 million hectares of degraded land across a quarter million villages, is an investment in long-term global peace and security.
•    And the investment opportunities are clear: there are more than 2 billion hectares of deforested and degraded land globally, waiting for investment and restoration.  Restoration is now considered an investment asset class, yielding returns of between 5 to 9% or more.

There is no shortage of commitments.

Nearly 50 governments have committed to the Bonn Challenge on Land Degradation Neutrality Framework Achieving the Bonn Challenge goal will generate about $170 billion in annual benefits from watershed protection, improved crop yields and forest products, and could sequester up to 1.7 gigatons of CO2 annually.

Most recently, there is global momentum to declare 2020 to 2030 a UN global decade on restoration, aiming to restore 2 billion hectares. This push stems from a widespread recognition that restoration can catalyze progress on the Sustainable Development Goals.

There have been some notable restoration successes.

There are successes at the national and regional level. For example, Ethiopia and Liberia are collaborating in the restoration efforts of the “great green wall” – a restoration effort roughly the size of Kenya that will help to achieve 40% of Bonn Challenge goal.  And, Pakistan, has planted a billion trees across 350,000 hectares, single-handedly achieving the 2030 goal for the Bonn Challenge.

We can also see restoration successes at the local community level.

For example, the community of Abrha Weatsbha, in the Tigray highlands of northern Ethiopia, was once on the brink of resettlement due to desertification, soil degradation and lack of water. In 2012 they received the prestigious Equator Prize for their work on reforestation and sustainable management of over 224,000 hectares of land and forests. Their restoration efforts resulted in improved soil quality, higher crop yields, greater biomass production, improved groundwater functioning, and greater flood production. The result? A 300% increase in family incomes, and dramatically improved food security and nutrition.

We are, for example, along with 6 other partners, supporting a $900 million project across 12 African countries, that will bring 10 million hectares under sustainable management practices, while mitigating up to 20 million tonnes of carbon , and with the support of Germany, UNDP and FAO are supporting a project on a massive open online course aimed at training thousands of farmers on climate-smart agriculture.

But overall, action is lagging behind, and land and forest degradation continue.

Public global finance for the drivers of deforestation, including forest clearing for agriculture, outpace sustainable forestry by a magnitude of 40:1, and private finance by 140:1.  Furthermore, less than 1% of agriculture  and about 11% of forestry  is certified as sustainable, and agriculture and forestry continue to result in wide scale degradation.

In short: the time to act is now.

Not only is restoration an accelerator to the SDGs, but failure to act on restoration is costing our global economy between US$4 and 20 trillion a year in lost ecosystem goods and services.

We have every reason to act, but we must scale up our ambition and political will.

I hope you will join me in redoubling our global commitment to the goal of restoring land and forests, in order to achieve our 2030 shared agenda.