Progress in the implementation of UNDP Gender Equality Strategy 2018-2021 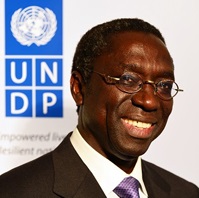 Members of the Executive Board

It is a pleasure to be here today to present the first Annual Report on the Implementation of the UNDP Gender Equality Strategy 2018-2021.

This Strategy was adopted at the September 2018 Executive Board Meeting. It provides a roadmap on how to mainstream gender equality across all outcomes of the UNDP Strategic Plan.

Next month, in July, at the ECOSOC High Level Political Forum, we will take stock on how the world is implementing the 2030 Agenda; we will then have an overall picture on how we are collectively faring on SDG 5. But we can say that while there has been progress across some dimensions, it remains too slow and uneven. According to UNDP estimates, gender inequality translates into 44% loss in potential human development. Yet we have now enough empirical evidence to illustrate that SDG 5 is one of the most potent development accelerators. It will then take renewed commitment and heightened ambition to bend upward the curve of Gender Equality and realize the 2030 Agenda.

UNDP is at the forefront of such an advocacy. In April this year, we joined UN Women and the Governments of Sweden and Tunisia, in organizing the Tunis Forum on Gender Equality, where youth and champions of gender equality from all corners of the world took stock on progress on gender equality; just a year before the 25th anniversary of the adoption of the Beijing Declaration and Platform of Action and the 20th anniversary of the landmark UN Security Council Resolution 1325 on women’s full and meaningful participation in peacebuilding and conflict resolution.

It is our deepest conviction, that the Gender Strategy you approved last year, will make UNDP an instrumental contributor to this much called for renewed ambition.

As you must have seen in the progress report submitted to you, and discussed during the informal sessions, improvements were made across all outcomes and signature solutions to support women as agent of change – a core principal of the UNDP Gender Equality Strategy.

Support for jobs and livelihoods continued to be an important aspect of UNDP’s work in crisis and post-crisis countries – where over 1.3 million accessed jobs and improved livelihoods, and nearly 60% of all beneficiaries of UNDP recovery programmes were women.

All regions and countries reported work to prevent and respond to gender-based violence. This encompassed supporting governments to adopt legal reforms, multi-sectoral services, including psycho social counseling and legal aid; and the implementation of national campaigns to change social norms.

Importantly, in 2018, UNDP joined UNFPA and UN Women to implement the UN-EU Joint Spotlight Initiative to End Violence Against Women and Girls which will operate in around 20 countries in 5 regions and is expected to reach more than 170 million people.

In fragile countries or those affected by crises or conflict, UNDP is also working through the Joint UN Global Programme to Strengthen the Rule of Law and Human Rights to build the legal systems, undertake security sector reforms, and support women to access justice for sexual and gender-based violence.

UNDP is also leading innovative new streams of work with the private sector to close gender gaps in labour market participation. The UNDP Gender Equality Certification Programme for the Private Sector has been operating in 14 countries, impacting 600 companies with 1.5 million workers. The promotion of gender equality in the workplace is another area of work where we are teaming up with UN Women as well as working closely with ILO and some of the IFIs.

Some of the progress seen to date is driven by UNDP’s strong accountability framework. In fact, in 2018, UNDP was recognized for meeting or exceeding 87.5% of the performance indicators against the United Nations System-wide Action Plan (UNSWAP) 2.0.

UNDP’s internal framework includes gender mainstreamed performance planning and results reporting tools such as the Gender Steering and Implementation Committee.  The Committee is now chaired by the Administrator and meets twice annually to review progress with the Senior Management team and address gaps in performance.

In 2018, the Administrator also committed to building a stronger and more inclusive work culture, appointing a gender balanced Senior Management team and for the first time in UNDP’s history, nominating a gender-balanced leadership pool of Resident Representatives.

In 2018, the Administrator also appointed a senior-level, inter-bureau task force to improve UNDP’s policies and procedures to tackle sexual harassment, sexual exploitation and abuse, which was discussed earlier during this Executive Board session.

UNDP continues to increase expenditures on projects that contribute to gender equality. The combined financial resources allocated to projects with gender equality as a significant and principle objective have improved from 47.7% to 55.4%, which is above 50% for the first time since the Gender Marker was launched in 2010.

Despite the above mentioned improved financial allocations, we want to see all projects making significant or principal contributions to gender equality.

To ensure that UNDP is fit for purpose to make these changes, the Gender Steering and Implementation Committee has sanctioned a forward-looking review of our key portfolios, gender capacities and architecture with a view to consistently achieving transformative results across all portfolios and regions.

I would like to thank you, Members of the Board, for your close inquiry into and monitoring of our gender equality results.

We look forward to your continued support.