Remarks at the Launch of Scaling Fences, Voices of Irregular African Migrants to Europe 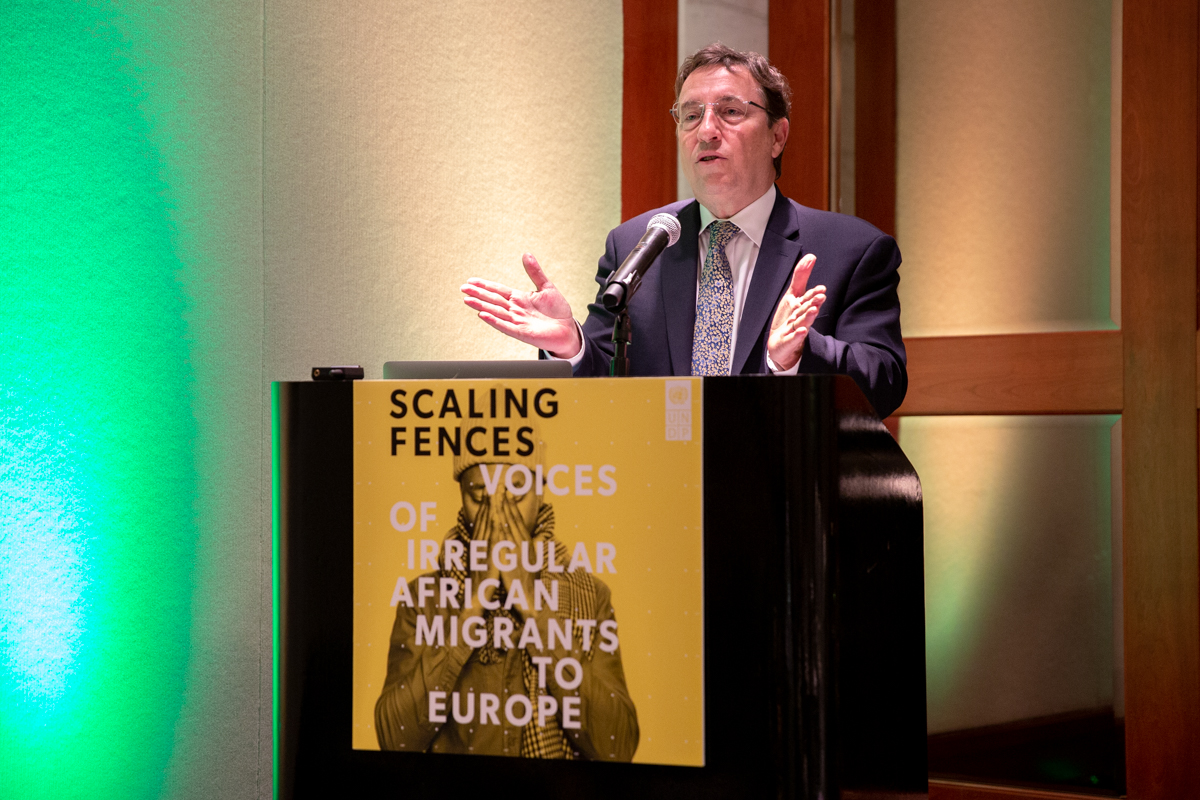 As prepared for delivery

I would like to warmly welcome you all to the launch of Scaling Fences, the Voices of Irregular African Migrants to Europe.

This report gives voice to a very particular, very important group of people: nearly two thousand irregular migrants who left their homes across 39 African nations and traveled to Europe in search of a better life.

They embarked on a difficult journey through irregular channels, in their own words, not to seek asylum or because of persecution, but because their ambition had outpaced the opportunities available in their home country.

Their movement and that of their peers who migrate for similar reasons through similar channels, tops the agendas of board rooms and street corners around the globe, and yet their voices – their own perspective on why they move and what they experience when they do, is much less heard.

That is why we are launching Scaling Fences here today, the second in a series of reports led by UNDP’s Africa Bureau documenting the journeys of young Africans.

We hope the insight and primary data it presents will help to broaden public debate on the phenomenon of irregular migration and its impact on migrants themselves, the families and countries they leave behind, and the countries in which they seek to build new lives.

Irregular migration is a subset of a much broader conversation on why people migrate. That people move is not new. Human mobility is part of our histories, responsible for weaving together cultures, economies, and the countries we all call home.

Just look at this panel, at everyone in this room. Most of us here today are migrants, people who have spent our lives grappling with our own sense of “foreign-ness” and “belonging” while being enriched by and celebrating the diversity of difference.

You may have noticed the design of this report. It is insightful. The journey of each person cited therein is captured in a series of numbers: 28°17’S 52°47’W to 40°70’N 73°90’W. That’s me -- my geographical fingerprint from Brazil, where I was born, to New York here today.

I, like most of you, am one of 272 million international migrants in the world today, an increase of 51 million since 2010. But the diversity of those 272 million people – 3.5 per cent of the global population - and the diverse reason why we have each left or were driven from home illustrate why migration is so very complex.

Consider the sharp rise in the number of individuals forcibly displaced – both internally and across sovereign borders – due to conflict, violence, and persecution. Between 2010 and 2017, the global number of refugees and asylum seekers increased by about 13 million. It is estimated that by the year 2050, more than 85 million people in Sub-Saharan Africa alone will be forced to migrate, including because of climate change.

Alongside rising inequalities within and between nations and climate change, globalization itself and the changing nature of work are factors that will continue to drive mobility.

His words make it clear: that responding to the large-scale movement of peoples – in all their complexities -- has become one of the greatest challenges of our time.

10 years ago, UNDP turned its human development lens on this complexity. Our 2009 Human Development Report Overcoming Barriers: Human mobility and development, released at the cusp of the international financial crisis, asked the following question: “Will the global economic crisis create barriers against migration, or will it become an opportunity to re-examine the role of movement in social and economic progress?

Embedded in that question was the understanding that in an unequal world, human mobility both drives and is driven by development. This same understanding comes through in the report we launch here today.

In fact, Scaling Fences highlights that migration is a reverberation of development progress across Africa, albeit progress that is uneven and not fast enough to meet people’s aspirations.

It focuses not on those Africans who can easily buy a plane ticket and migrate, but on the stories of those people who are willing to overcome any barriers to make a perilous journey to Europe --  who believe that it is worth risking their lives to do so.

Indeed, the report’s title bears witness to this paradox barriers. ‘Scaling Fences’ refers to the metaphorical barriers young Africans perceive to personal fulfilment, including through the economic and socio-political opportunities in home countries that, the data indicates, drive the will to migrate.

My UNDP colleague Mohamed Yahya, the research director of Scaling Fences, will shortly go into detail on the report’s findings, but permit me to headline parts of the dataset that really struck me – some of which you have seen in the short video just now:

1.      First, the report challenges assumptions around irregular migration from Africa to Europe. It finds that getting a job was not the only motivation to move, that not all irregular migrants were ‘poor’ in Africa, nor had lower education levels.

58 per cent were either employed or in school at the time of their departure, with the majority of those working earning competitive wages at home. They are of the ‘springboard generation’ – beneficiaries of two decades of remarkable development progress in Africa. Still, some 50 per cent of those working said they were not earning enough.

2.      Second, that barriers to opportunity, or ‘choice-lessness’, were critical factors informing the calculation of the 1,970 people surveyed. That in spite of development progress at home, 77 percent felt that their voice was unheard or that their country’s political system provided no opportunity through which to exert influence on government.

3.      Third, despite the danger and risks of the fraught journey from Africa to Europe, only 2 per cent of all those people surveyed said that greater awareness of the risks would have caused them to stay at home. In fact, 41 percent of respondents said ‘nothing’ would have changed their decision to migrate to Europe.

These numbers offer critical insight for the public and policy- and decision-makers in Africa and in Europe. They are an attempt to fill a gap in the evidence base on a subset of migrants about whom many assumptions and judgements are made but about whom, in fact we have little primary data.

This group are what one could term “understudied”, and consequently, perhaps underserved by the development policy agenda. By shining a light on their stories, we hope to broaden and advance the current debate.

Indeed, improved understanding is one of the objectives of the 2018 Global Compact for Safe Orderly and Regular Migration, the first internationally negotiated agreement to cover all dimensions of international migration.

As the UN development agency and a member of the UN Migration Network, UNDP is committed to supporting the effective operationalization of the Compact, working together with the International Organization on Migration, the UN High Commission for Refugees, the International Labour Organization, UN Women and other partners in the process.

We focus in particularly on three of the Compact’s objectives:

-          to minimize the negative drivers and structural factors that compel people to leave their country of origin,

-          create conditions for migrants and diasporas to fully contribute to sustainable development in all countries, and

Currently, UNDP is currently working with over 40 countries to

work in harmony with humanitarian actors to prepare for and support large movements of displaced people,

-          and/or strengthen the resilience of the communities that host them.

We are pushing the boundaries through collaborations with partners like the Open Society Foundations to explore improved livelihood opportunities and voice for displaced people, including in the face of the changing nature of work and the advent of digitalization.

What we see through this work, just as we do through this report, is that the complex question of migration and the constant pursuit of development are intertwined, and that with the Sustainable Development Goals we have a once in a generation opportunity to catalyze progress.

Not only are the Goals the best chance the world has for peace - to minimize the conflict that drives people from home – and to tackle the climate crisis, but their implementation will accelerate the ability of government, markets and society to create opportunities that keep pace with people’s rising ambition.

Although irregular migration from Africa to Europe has recently declined, the phenomenon is likely to continue as most African countries develop, because though migration in all its forms is sometimes painted as a crisis, it is actually a longer-term trend – one that started long before us all here today and will continue long into the future.

The impact we can make starts by listening, by understanding, and I hope that Scaling Fences helps us all to do just that.

Thank you once again for joining us today.