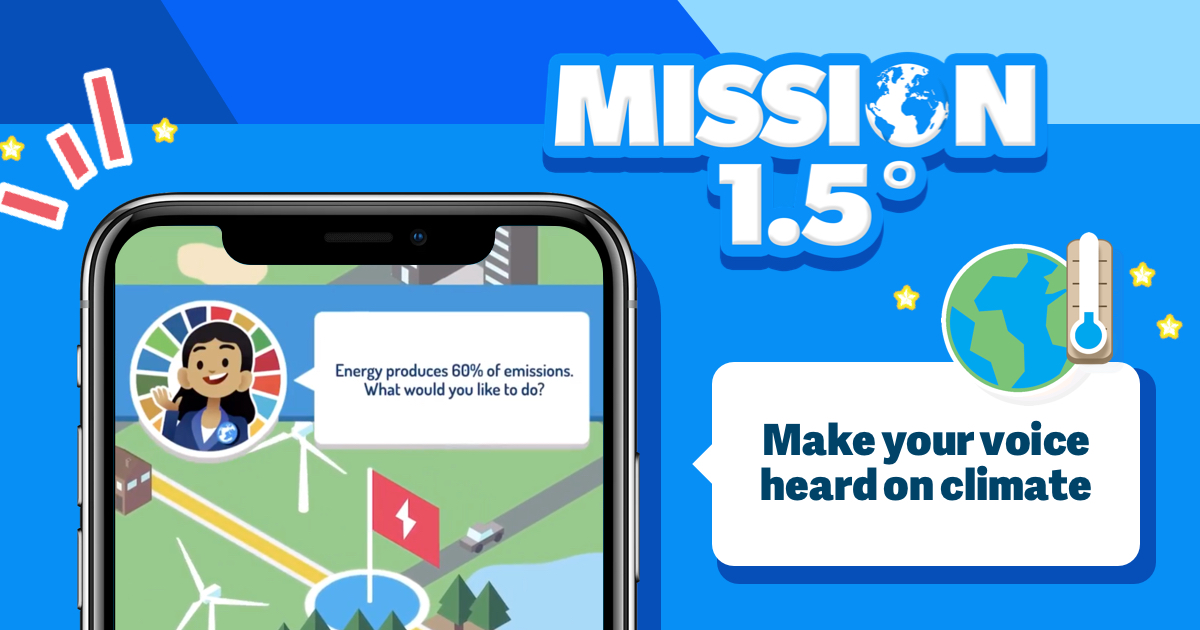 Mission 1.5 players will take on the role of climate policymakers trying to keep global warming below 1.5 degrees Celsius. Caption: UNDP

New York City - Today, celebrities and youth activists met with UN officials, governments and civil society to launch Mission 1.5, a campaign that aims to bridge the gap between people and governments on ambitious climate action.

Mission 1.5 aims to give 20 million people around the world the opportunity to have their say on ways to limit climate change that they want to see adopted by government leaders. The campaign, led by the United Nations Development Programme (UNDP), hopes to address the disconnect between citizens and governments that has seen a groundswell of public opinion by citizens around the world, including school strikes and mass protests.

The campaign is built around an internet and mobile-based video game, developed by UNDP alongside experts in game development, climate science and public polling, in which players take on the role of climate policymakers and make decisions to try to keep global warming below 1.5 degrees Celsius.

After the game, players are asked to vote on key climate actions they want to see adopted. This data will be analyzed and delivered to governments, who often lack access to reliable information on public opinion on climate action.

The previous biggest international survey of public opinion on climate change canvassed 10,000 people across 76 countries, and was conducted ahead of the 2015 Paris climate talks.

The Mission 1.5 game is available at mission1point5.org and can be played by people in every country in the world. It will launch initially in Arabic, Chinese, English, French, Russian and Spanish, with further roll-out internationally throughout the year up to the UN climate talks to be held in the United Kingdom in November.

Achim Steiner, UNDP Administrator: "Together with partners from across the private and public sectors, we have the ability with this campaign to connect millions of people with their governments in an innovative two-way discussion on solutions to the climate crisis, and increase ambition ahead of the COP26 climate talks in Glasgow later this year.”

Singer-Songwriter Yemi Alade: “I am so excited to hear what climate action matters to people around the world—especially my fellow Nigerians! Mission 1.5 is going to connect people globally on something that can’t be ignored anymore. The time to act is now!”

Cassie Flynn, UNDP Climate Change Advisor: “People often feel disconnected from the leaders that must make urgent decisions on the climate crisis. Mission 1.5 is a way to help people understand climate solutions and make their voices heard. In many ways, it is the People’s Climate Vote.”

Jude Ower, Founder and CEO of Playmob: “Gaming is one of the most powerful mediums of our time to educate, raise awareness and encourage action on major global issues. To work with UNDP to unlock the power of gaming for one of our planet's most pressing issues - climate change - has been incredibly exciting and the fact that people's voices will be heard through gaming, to have a real world outcome of being heard by world leaders, will really show that gaming can be a powerful force for change in the world today.”

Mission 1.5 was developed by UNDP and partners as an online platform that educates people on climate action and connects them with their governments and policymakers. The campaign is called Mission 1.5 because we must act now to limit global temperature rise to 1.5 degrees Celsius.