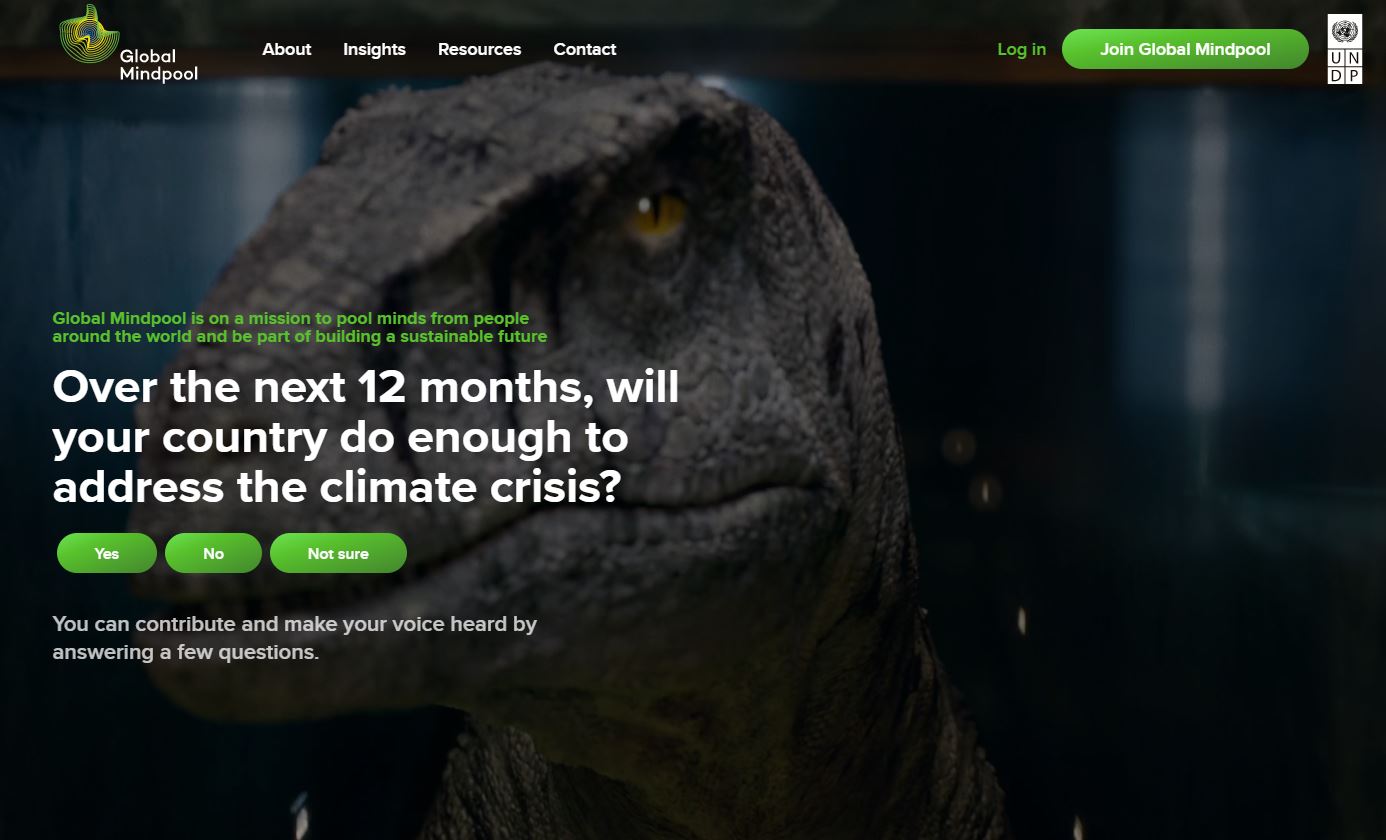 The core idea of Global Mindpool is that pooling the minds of people from all over the world helps build a collective intelligence that can identify the best solutions to the climate crisis. Sign up for Global Mindpool and explore the website for more information at https://globalmindpool.org/

Lisbon, 2 November 2021 – As part of its global campaign ‘Don’t Choose Extinction’ on climate and inequality, the United Nations Development Programme (UNDP) today launched Global Mindpool, a collective intelligence platform that engages with people across the world to find solutions to the climate emergency.

Global Mindpool is an online tool where citizens can make their voices heard on an issue that affects all humanity. Users will share their observations, knowledge and suggestions on climate change and energy policies, and Global Mindpool will distill it into authentic, predictive, and actionable data to better inform decision-makers in government, civil society, and the private sector.

“Through this collective intelligence, UNDP aims to find out what citizens know, feel, fear and hope about the issues to be able to bridge the gap between people and policy makers. UNDP will use the data collected to help inform policy makers on possible paths to a sustainable future for all,” said Ulrika Modeer, Director of the Bureau of External Relations and Advocacy at UNDP.

Built in partnership between UNDP and Mindpool, a Danish technology firm specializing in collective intelligence, the platform was presented at the Web Summit 2021 by actor and UNDP Goodwill Ambassador, Nikolaj Coster-Waldau; and CEO and co-founder of Mindpool, Mik Thobo-Carlsen.

“Collective intelligence is grounded in the notion that we’re smarter and better when we work together. Local knowledge and local solutions are vital, given how climate change affects different communities in unique and specific ways. We can then translate this deeper, broader understanding into lasting change and effective solutions”, said Mik Thobo-Carlsen, CEO & co-founder at Mindpool.

“The platform is quick and easy to join. It asks you questions such as ‘Is your country doing enough to fight climate change?’ and ‘Is climate change affecting you personally?’. You provide answers and UNDP will amplify your voices to key decision-makers around the globe”, said Coster-Waldau.

The core idea of Global Mindpool is that pooling the minds of people from all over the world helps build a collective intelligence that can identify the best solutions to the climate crisis. Sign up for Global Mindpool and explore the website for more information at https://globalmindpool.org/

The world spends an astounding US 423 billion dollars annually to subsidize fossil fuels for consumers –oil, electricity that is generated by the burning of other fossil fuels, gas, and coal. Addressing fossil fuel subsidies is a politically charged issue, but the facts show that reform is necessary, and when done correctly, supports the poor, creates jobs, and protects the planet.

To spotlight the hugely negative effects fossil fuel subsidies have on people and planet, UNDP has produced a short film as part of its new global campaign ‘Don’t Choose Extinction’ in which one of the world’s most well-known extinct animals, a dinosaur named Frankie, gives a speech to the UN General Assembly urging world leaders to shift away from fossil fuel subsidies.

Led by a cast of celebrity voices from around the world—US actor Jack Black, Mexican actor Eiza González, French-Senegalese actor Aïssa Maïga and Danish actor Nikolaj Coster-Wadau —the Don’t Choose Extinction campaign aims to raise public awareness of how fossil fuel subsidies are canceling out significant progress to date towards ending climate change and are driving inequality by disproportionately benefitting the rich.

UNDP is the leading United Nations organization fighting to end the injustice of poverty, inequality, and climate change. Working with our broad network of experts and partners in 170 countries, we help nations to build integrated, lasting solutions for people and planet. Learn more at undp.org.