Latin America Launches New Roadmap to Save the Jaguar 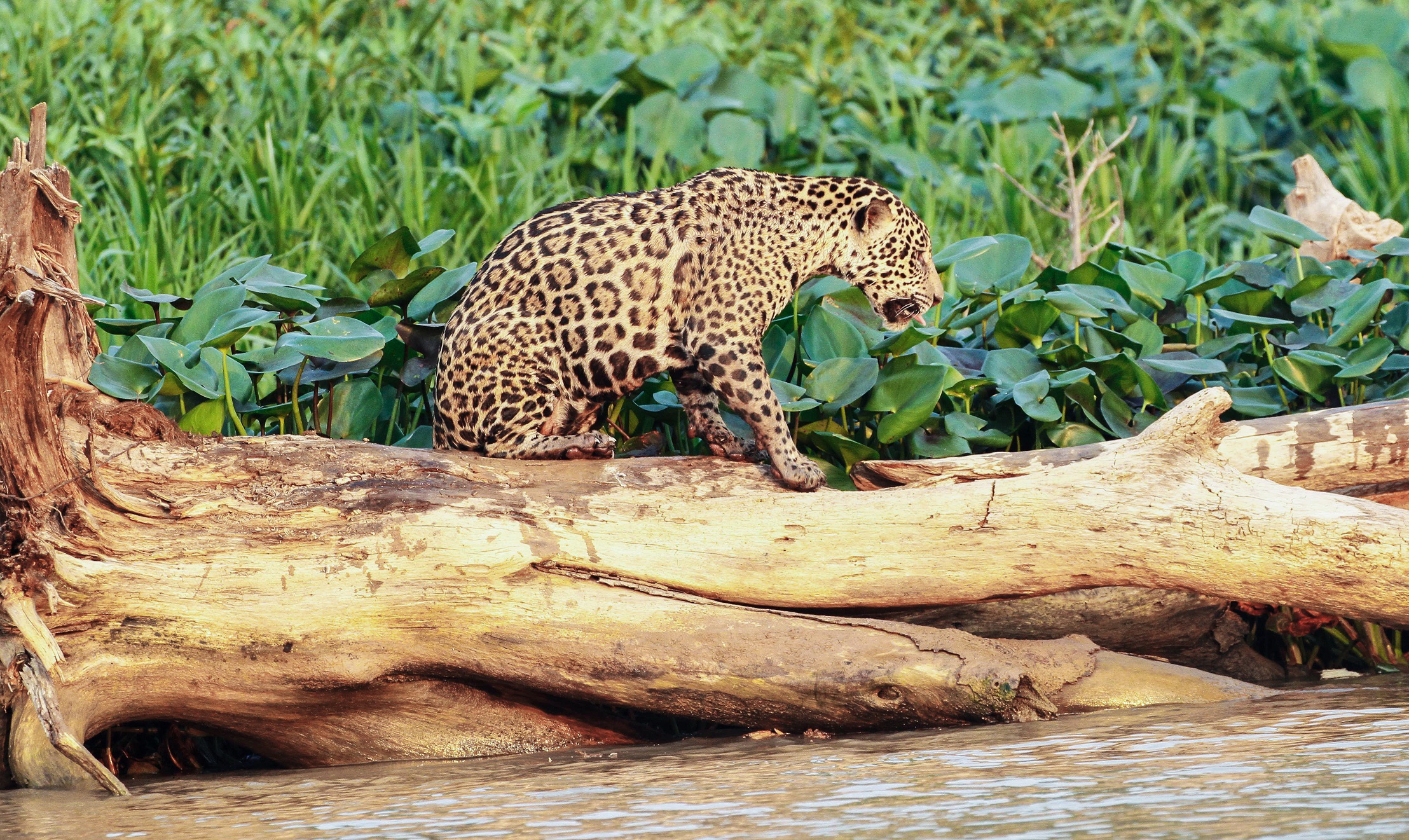 Sharm El-Sheikh, Egypt, Nov 19 – In an unprecedented global commitment to saving the jaguar, leading international conservation organizations and 14 jaguar range states have joined together to launch the Jaguar 2030 Conservation Roadmap for the Americas, presented at the Conference of Parties (COP) 14 of the Convention on Biological Diversity.

Published at a critical and uncertain time for the future of the Americas’ largest wild cat, the roadmap aims to strengthen the Jaguar Corridor, ranging from Mexico to Argentina, by securing 30 priority jaguar conservation landscapes by the year 2030. This bold, regionally-focused initiative will pave a new path to strengthen international cooperation and awareness for jaguar protection initiatives, including those mitigating human-jaguar conflict and connecting and protecting jaguar habitats, and stimulate sustainable development opportunities, such as eco-tourism, that support the well-being of communities and indigenous peoples coexisting with this species.

At the Convention, the United Nations Development Programme (UNDP), World Wildlife Fund (WWF), Wildlife Conservation Society (WCS), Panthera and government representatives also announced the creation of the first-ever International Jaguar Day. Celebrated annually on November 29, this day will raise awareness about threats facing the jaguar, conservation efforts ensuring its survival and the role of the jaguar as a keystone species whose presence is indicative of a healthy ecosystem – the foundation for a sustainable future for wildlife and people alike.

“The Jaguar Conservation Roadmap for the Americas represents the type of innovative partnership that is essential for achieving the SDGs,” stated Midori Paxton, the Head of Biodiversity and Ecosystems at UNDP. “By bringing together range country governments, the private sector, civil society and international partners, the Roadmap will help protect key jaguar corridors in ways that strengthen sustainable livelihoods for local communities and open up new business opportunities for ecotourism and sustainable agriculture.”

Panthera Conservation Science Executive Director, Dr. Howard Quigley, stated, “Today represents a true landmark for the future of the jaguar. The Jaguar 2030 Roadmap breathes new life into the world of jaguar conservation, providing a vision and real solutions for the world to protect this culturally iconic and ecologically essential species, while creating tremendous economic opportunities and a sustainable future for all. Particularly as new and pervasive threats emerge for the species, this first-of-its-kind global commitment shines a much-needed conservation spotlight on the often overlooked jaguar.”

The release of the roadmap follows the United Nations high-level forum held in March that resulted in the launch of the Jaguar 2030 New York Statement by 14 jaguar range countries and international conservation partners.

The jaguar is the largest apex carnivore in Latin America, ranging across 18 countries. However, 50% of the species’ original range has been lost and jaguar populations are declining due to illegal poaching, human-jaguar conflict and loss and fragmentation of habitat. Given this decline, including the jaguar’s extinction in El Salvador and Uruguay, governments from 14 of 18 jaguar range states have doubled down to save the species, including.

Edson Duarte, Brazil’s Minister of the Environment: “We are full committed to protect the jaguar in our country. To increase the public awareness and to promote integrated actions we established a National Jaguar Day.”

María José Villanueva, WWF Mexico Conservation Director: “The jaguar is an icon for Latin America and a clear reminder of our indigenous heritage, we need to strive to mobilize people to stand up and defend the home we share. We need to go beyond the ‘business as usual’ efforts and engage new partners such as the private and financial sectors. We cannot continue developing at the expense of biodiversity– we need to find a balance where both people and nature can thrive.”

Dr. John Polisar, WCS Jaguar Conservation Program Coordinator: “The future of humans and jaguars is fused in forest and biodiversity conservation. In a time when the world has lost much of its terrestrial wilderness, we are pleased to have united with our partners to save a symbol of wild forests in tropical America, the jaguar. International Jaguar Day demonstrates our unprecedented collective commitment to hold ground for jaguars in core areas and to maintain connectivity between them so that jaguars can thrive across the Americas. It is the day to celebrate our efforts to ensure that jaguars and their spectacular habitats thrive forever.”

Note to the editors:

Four strategic jaguar conservation pathways are outlined in the roadmap: 1) Range-wide coordination in support of protection, connectivity, scaling up and enhancing ambition; 2) Development and national-level implementation of range countries’ strategies and improved contributions to transboundary efforts; 3) Scaling up of conservation-compatible sustainable development models in jaguar corridors; and 4) Enhancing the financial sustainability of systems and actions aimed to conserve jaguars and associated ecosystems.

The Convention on Biological Diversity (CBD) was opened for signature at the Earth Summit in Rio de Janeiro on 5 June 1992 and entered into effect on 29 December 1993. CBD has three main goals: the conservation of biological diversity (or biodiversity); the sustainable use of its components; and the fair and equitable sharing of benefits arising from genetic resources. Its objective is to develop national strategies for the conservation and sustainable use of biological diversity. It is often seen as the key document regarding sustainable development. For more information, please visit: https://www.cbd.int/

Panthera, founded in 2006, is devoted exclusively to preserving wild cats and their critical role in the world’s ecosystems. Panthera’s team of leading biologists, law enforcement experts and wild cat advocates develop innovative strategies based on the best available science to protect cheetahs, jaguars, leopards, lions, pumas, snow leopards and tigers and their vast landscapes. In 36 countries around the world, Panthera works with a wide variety of stakeholders to reduce or eliminate the most pressing threats to wild cats—securing their future, and ours. Visit panthera.org

UNDP partners with people at all levels of society to help build nations that can withstand crisis, and drive and sustain the kind of growth that improves the quality of life for everyone. On the ground in nearly 170 countries and territories, we offer global perspective and local insight to help empower lives and build resilient nations.

The Wildlife Conservation Society saves wildlife and wild places worldwide through science, conservation action, education, and inspiring people to value nature. WCS envisions a world where wildlife thrives in healthy lands and seas, valued by societies that embrace and benefit from the diversity and integrity of life on earth. To achieve our mission, WCS, based at the Bronx Zoo, harnesses the power of its Global Conservation Program in more than 60 nations and in all the world’s oceans and its five wildlife parks in New York City, visited by 4 million people annually. WCS combines its expertise in the field, zoos, and aquarium to achieve its conservation mission.  Visit www.wcs.org and follow us at @WCSNewsroom.

World Wildlife Fund is one of the largest and most experienced independent conservation organizations in the world. WWF was born in 1961 and is known for its Panda symbol. Currently, close to 5 million people cooperate with the WWF and it has a global network that works in more than 100 countries. Its mission is to stop nature degradation and build a future in which humans can live in harmony with nature, conserving the world’s biological diversity, ensuring that the sustainable use of its renewable natural resources and promote a reduction in pollution and wasteful consumption For more information, please visit: www.wwf.org.mx and www.panda.org