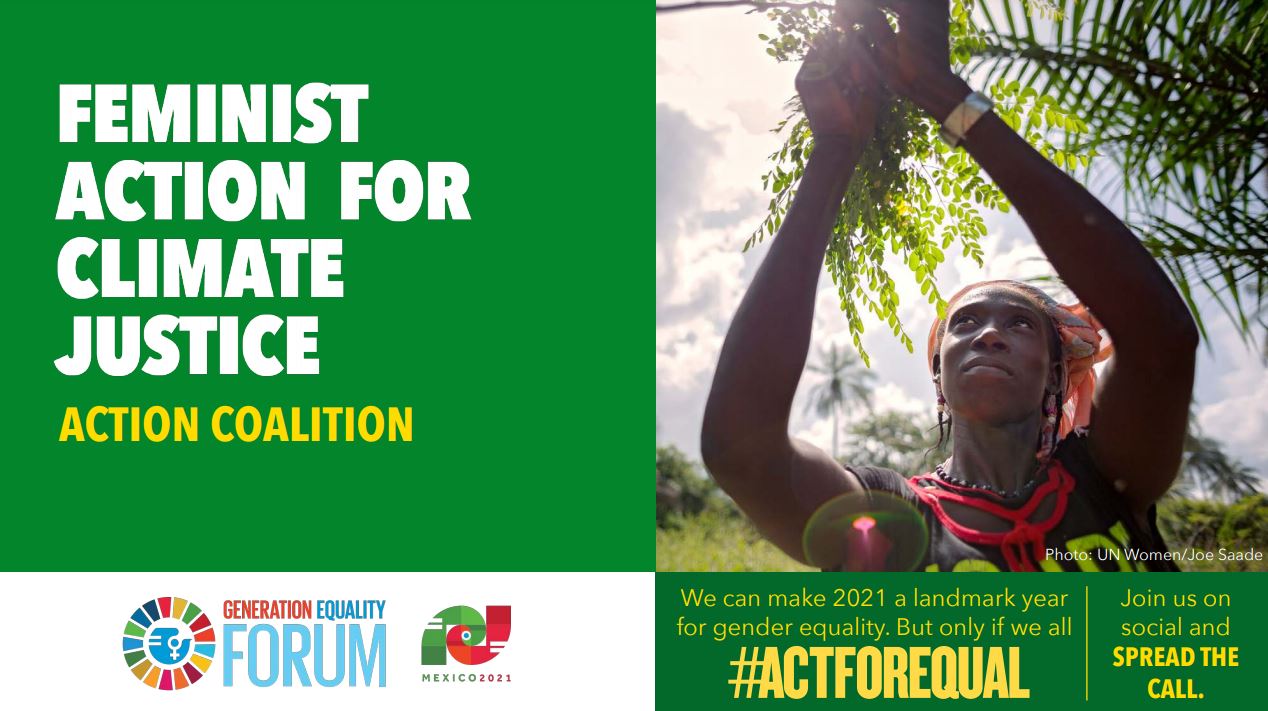 A quarter of a century after the groundbreaking Fourth World Conference on Women in Beijing, and in the face of rising inequality, a global pandemic and a rapidly accelerating climate crisis, the world’s political leaders, youth activists, corporate executives, development agencies and others recently gathered in Paris for the Generation Equality Forum to lay the foundation for a new agenda to address gender equality. In the wake of the three-day Forum, the global community committed to an impressive USD 40 billion and a five-year Global Acceleration Plan for Gender Equality. Developed by six Action Coalitions, the Plan is designed to move the needle in areas from gender-based violence and technology to economic and climate justice.

During a week when the headlines included life-threateningly high temperatures in western North America, torrential rains that triggered a deadly mudslide in Japan, and unprecedented locust swarms wreaking havoc on East African farmers, the Feminist Action for Climate Justice Coalition announced a series of concrete commitments to accelerate gender equality in climate and environment-related issues. The Action Coalition is led by a consortium comprised of UNDP, IUCN, UNEP, OECD, UNFCCC and other partners.

At the Coalition’s 2 July launch event, speakers outlined commitments to increase financing for gender-just climate solutions, enable women and girls to lead a transition to a green economy, and build the resilience of women and girls to climate impacts and disaster risk, including through land rights and tenure security.

During the event UNDP announced that the organization will focus on three core efforts as part of the Coalition over the next five years. With its consortium of partners, UNDP and UN women will launch an expansion of the COVID-19 Global Gender Response Tracker later this year to include new data on the gender and environmental dimensions of the pandemic response. By adding this new component, UNDP can start to identify gender gaps and good practices as well as mobilize governments to integrate a gender and green lens to their COVID-19 response efforts.

UNDP also plans to unite and scale up current efforts to address gender inequalities in climate, energy and the environment.  This will include leveraging its financial, policy, programmatic and advocacy expertise in support of at least 50 countries.

For example, in Ghana, UNDP will launch a new initiative to build a more equitable shea value chain that not only enhances forest carbon stocks but also directly strengthens women’s access and control over natural resources. This work will support sustainable livelihoods for nearly 80,000 women shea collectors, including through commercial contracts between members of the Global Shea Alliance and women’s cooperatives. In Uzbekistan, UNDP will support the country’s national strategy to transition to a green economy by 2030, including a focus on gender-responsive policy and regulatory frameworks and boosting women’s employment in green jobs.

Besides our work with partners and governments, UNDP will also look inward and boost its own capacities on gender and climate.  This work will be approached in different ways. For example, UNDP will increase its internal technical capacities on gender by improving its integrated, programmatic and strategic approach to deliver gender equality and supporting more integrated nature, climate, and energy efforts, including in nine pilot UNDP country offices.

UNDP will also expand its flagship Gender Seal programme, which builds capacities and supports transformational gender equality results for our country offices. This will include boosting the climate and environmental aspects of the Seal programme in the coming year to strengthen these results.

In addition to participating in this Action Coalition, UNDP also joined OHCHR, UNFPA, WHO, UNEP, and UN Women to jointly commit to supporting civic space for feminist movements and women human rights defenders during the Forum.

Convened by UN Women and co-hosted by the governments of Mexico and France, the Forum couldn’t have taken place at a more crucial time, as governments try to determine the best way forward in the face of the pandemic, including how to address the gendered impacts of the crisis. After over a year of watching the COVID-19 crisis widen gender inequalities and threaten progress on hard-won gender gains, these momentous commitments are a major step in driving policy reform and getting the Sustainable Development Goals, including the gender goals, back on track. This is particularly vital since a lack of finances and resources are one of the reasons for slow progress in advancing gender equality.

As countries take urgent actions as part of the COVID-19 recovery, there is an unprecedented opportunity to work together to address the gender dimensions of the crisis and for the world to move toward a more equitable and green recovery.