Over 80 producers from both banks of the Nistru river and the representatives of the big retail chains from Moldova have initiated today a dialogue and established collaboration partnerships during the Trade Forum, organized by “Advanced Cross-river Capacities for Trade” Project (AdTrade), financed by Sweden and implemented by UNDP.

The retail trade trends, the terms and conditions for accessing supermarket chains from Moldova were the topics debated by the participants during the first half of the event. Several representatives of the retail companies from Moldova have presented the story of their networks’ development, the technical requirements for collaboration, the payment conditions, and other useful information for producers. The participants got familiarized with the major changes in retail area and the key trends which will emerge over the next years, as well as with the innovative tools which may be applied by producers to conquer the local market.

Oxana Paierele, Program Coordinator at the Swedish Embassy in Moldova, mentioned at the beginning of the forum: "Economic development is one of the key priorities of Swedish assistance for the Republic of Moldova, including by developing the capacities of the companies from both banks of the Nistru river to export their products to the European Union’s market. Economic development potential should be valued not just in Chisinau, but also in the regions. The trade growth will also be boosted by ensuring a supportive climate between the producers from both banks of the Nistru river, hence creating opportunities of decent income for all the inhabitants of Moldova”.

The Trade Forum is part of a series of activities supported by Sweden and UNDP, within the AdTrade project, which aim to increase the competitiveness of the companies form both banks of the Nistru river and promote their cooperation for export growth and market diversification.

“By organizing this forum, we aimed to facilitate collaboration among the partners, including by informing the producers about the chain requirements for delivered products and work contractual conditions. Our goal is to increase the presence of local products on the shelves of shops from Moldova. Such initiatives provide the producers from both sides of the Nistru river the opportunity to interact among themselves and to find new possibilities for business development, thus contributing to creating more jobs,” says Maxim Cataranciuc, Manager of UNDP Project AdTrade.

During the second part of the event, producers from both sides of the Nistru river had the possibility to present their commercial offers and to establish collaboration relations with retailers, and with other producers within B2B sessions.

This forum was a perfect opportunity for Valeriu Prodius from Tiraspol to develop new partnerships with producers from the right side of the river: “The company that I represent produces spirulina in the form of frozen paste – a product with multiple benefits for health, but also not so known and used in the Republic of Moldova. I succeeded to get some agreements during the forum with several bakery companies to launch together an innovative product for our market – spirulina-enforced bread.”

Angela Sobol from Vărvăreuca village, Florești district, has been producing for several years already gluten-free cereal flakes, which are being sold within a chain of shops. However, she would like to extend the sales to more commercial chains from Moldova and abroad. The producer mentioned that it is difficult to convince the retailers to accept the product on the shelves of their shops, because there is a wide range of imported products in this area, hence reducing the opportunities for accessing retail networks. It is namely for this reason that she thinks that the initiative of the UNDP project AdTrade to organize such a forum is extremely useful: “I had the possibility to interact directly with the representatives of big supermarkets, as well as with other producers and this helped me to promote my product, to understand better the retailers’ requirements and the steps to be undertaken for my products to get on their shelves and conquer the clients.”

The participants mentioned that this meeting was very useful and necessary and came up with the proposal to organize repeated editions of the forum, meant to create connections among them.

The “Advanced Cross-River Capacities for Trade” Project (AdTrade) provides assistance for creating long-term trade relations among the businessmen from both sides of the Nistru river and building a confidence and cooperation environment in the region. The initiative fosters and promotes exports of goods and services from the region, by accessing the opportunities provided by the Deep and Comprehensive Free Trade Agreement (DCFTA). The Project supports development and increases competitiveness of micro, small, and medium enterprises (MSME) and contributes to creating new companies, hence leading implicitly to improving living conditions of the population from both sides of the Nistru river. 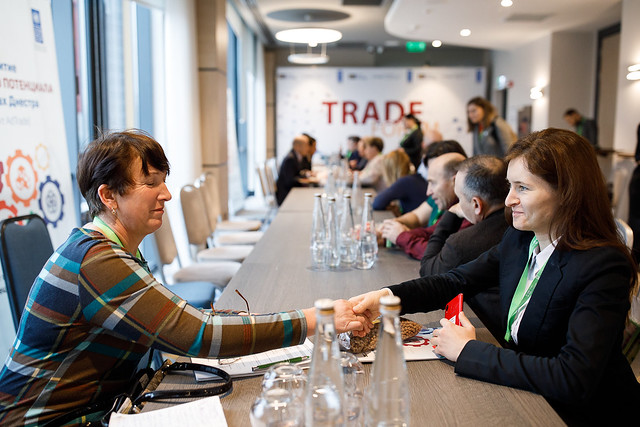