Approximately 95 per cent of Libya’s land area is comprised of desert. Coastal areas, the low mountains, and scattered oases in the desert, are the most densely populated areas of the country, and suffer the highest levels of land degradation and the least protection of its biologically diverse ecosystems and habitats. Desertification is one of the most pressing environmental threats in Libya which poses risks of further loss of already limited arable land, thereby potentially impacting food security. Desertification is driven by a combination of factors, including high rates of urbanization and overexploitation of water resources and natural vegetation.

Libya is heavily susceptible to the impacts of climate change. Projected increases in temperatures, increased frequency and intensity of extreme weather conditions, declining precipitation, and rising sea levels threaten the sustainability of water supplies and poses an existential risk to coastal population centres, where around 70 per cent of the country’s people reside. Climate change is compounding water scarcity, thereby reducing water availability for agricultural and domestic consumption.

Libya is considered one of the most water scarce countries in the world, water scarcity is one of the greatest emerging threats facing Libya; the country needs to ensure equitable access to water for domestic and economic purposes. Climate smart agricultural methods should reduce the overuse of water resources and other environmentally damaging practices that contribute to soil erosion and desertification, which further impact productive sectors and food security. Strengthening national capacity for the implementation of international environmental obligations could also facilitate the protection marine and terrestrial habitats and ecosystems.

Despite Libya’s vulnerability to the impacts of climate change, there has been little progress towards the development and implementation of national disaster risk reduction or climate change adaptation strategies or plans. Continued environmental degradation threatens further deterioration of terrestrial and marine environments and ecosystems without meaningful action.

Libya’s vulnerability to the impacts of climate change and environmental degradation necessitates proactive measures against their potential consequences. The development and implementation of national disaster risk reduction and climate change adaptation policies and strategies can help mitigate the worst impacts of climate change, including desertification and the protection of coastal urban centres from rising sea levels (which will likely increase soil salinity, further impacting agricultural production)

While Libya signed the United Nations Framework Convention on Climate Change in 2015 and ratified the Paris Climate Accord in 2021, it has not submitted the requisite policies, plans or reports, such as a National Determined Contribution, National Adaptation Plans, or National Communications.

The impacts of climate change are compounding water scarcity, including through droughts, floods, and extreme weather and heat events, which can damage vital water and sanitation infrastructure and services at homes, schools and healthcare facilities, and food supplies.

Providing around 60 per cent of Libya’s of freshwater needs, the Man-Made River Project exploits water from non-renewable aquifers that cannot be recharged by rain. Higher temperatures and diminished rainfall increase irrigation needs, places further pressure on water resources, and increases the risk of drought. A lack of awareness of the optimal use and conservation of water, and the penetration of seawater into coastal aquifers, further contributes to the water crisis.

UNDP supports the development of policies that improve resilience to climate change at the national and local levels.

UNDP’s contribution will focus on reduction of emissions and improved policy and strategies to tackle climate change, notably in the oil sector; facilitating the transition towards greener energy and improving water security by extending the life of the Man-Made River. 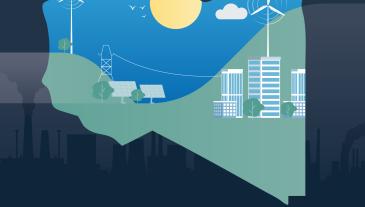