Women and girls play an important role in ensuring the sustainability of rural households and communities: they represent a large part of the agricultural labor force, do most of the unpaid work at home and care for family members, run the household and produce food.

Today in Kazakhstan, 11.8 percent of all women work in agriculture, fisheries and forestry, but only a quarter of all small and medium-sized enterprises in these sectors are women-headed. A number of factors still act as a barrier to women's opportunities for professional development:  lack of equal access to production resources and assets; lack of social infrastructure in the countryside that frees up time for women's employment; existing social norms; and gender stereotypes.

In 2014 the “Eco-Damu” concessional lending Programme for rural residents was developed and launched within the cooperation framework between UNDP, the “Fund for Financial Support of Agriculture” JSC and the Committee for Forestry and Wildlife of the Ministry of Ecology, Geology and Natural Resources. The goal of the programme is to promote the development of "green" business in rural areas located near national parks, conservancy areas and nature reserves.

One of its features is its gender component: a key goal – the development of women's entrepreneurship in the countryside. Women living near specially protected natural areas have the opportunity to receive a low interest loan to development alternative activities: ecotourism, forestry, fishing, or pasture farming, a hotel business, poultry farming, souvenir production, beekeeping, and more.

Alia's story – a yurt guesthouse near a pearl of water

Aliya Temirova from the Almaty region is one entrepreneur who received a loan under the “Eco-Damu” programme. Her native village of Saty, where Aliya's family lives, is located 10 km from the Kolsai Lakes, pearl of the Almaty region.

“For some people, the Kolsai Lakes represent a powerful force, for others, they are places of faith. Kolsai will not you leave you indifferent, even if you glimpse it for the first time on a foggy morning,”

Thanks to the programme’s support, Aliya was able to establish her family business – a small guest house near the Kolsai Lakes. Yurts were set up three kilometers from the lake, observing all environmental standards. It was important for the family that the yurts were made of wood, and craftsmen hand-made the interior decoration of the guest yurt, reflecting the national colour and way of life of their ancestors. Aliya herself cooks Kazakh dishes and desserts for tourists who travel from all over Kazakhstan and from abroad.

“We do business together with my husband and brother Temirlan, a graduate of the Faculty of Tourism of the Kazakh State University. We have work experience, Temirlan has knowledge. We have combined these two components to build a sustainable business by developing ecotourism in our native region”,

Lyudmila’s story – beehives in the mountain

“After retirement, my husband Yuri and I decided to start beekeeping. In Kazakhstan, beekeeping is developed in the Almaty, East Kazakhstan and Turkestan regions, where all conditions for beekeeping exist: herbs, mountain pastures, orchards and fruit trees. This is worthy work, which brings not only income, but also great benefits to agriculture”,

In 2021, Lyudmila received concessional funding to expand her beekeeping farm in the Tolebi district of the Turkestan region. With borrowed funds, the family purchased 100 queen bees and the necessary equipment to expand the business.

“Beekeeping is hard work. We are developing. Maybe not as fast as we would like, but still there is forward movement. Now we have 50 bee colonies. We take the beehives to the mountains, where there is a lot of pollen. This contributes to the successful growth of worker bees”,

According to the businesswomen, Kazakhstan is just beginning to understand that beekeeping to produce honey is just a by-product, 10 percent of an income. The income of apiaries should come from their main function: pollination of sunflowers, rapeseed, buckwheat, safflower, fruit trees, for which apiaries are created all over the world. Today, Kazakhstani beekeepers are approached only in isolated cases by agricultural producers and gardeners who need a paid pollination service.

“There are many apiaries in the Turkestan region, competition is strong, and sales are difficult. However, in fair competition, the strongest wins - and this is fair”,

“I’ve loved to sew since childhood. I sewed beautiful dresses for my dolls and my friends’ dolls, decorating them with ruffles and frills. My parents supported my interest, but they didn’t want me to become a seamstress. In the early 2000s, the seamstress profession faded, alongside lawyers, economists and IT people, so I became an English teacher. My love for sewing was postponed until better times”,

Ainagul opened her sewing workshop in the village of Damba, counting on local women who could sew and young talented girls keen on learning the art of sewing. Unfortunately, not everything went as planned. The village had no women who could combine housework with working in a seamstress shop. Since orders are mainly received from residents and guests from Atyrau, the needlewomen of Ainagul’s workshop often work in the city.

Today, the main products of the Gazhaiyp brand are blankets made of camel and sheep wool, pillows in the national style, bedspreads, kurak korpe, ethnographic style clothes and much more. All products are in demand both among the local population and among foreign tourists coming to Atyrau. Ainagul makes small crafts with national patterns, especially for tourists, that are purchased by travel companies.

“I believe in the future of my business. The “Gazhaiyp” brand is becoming recognizable in the region, becoming part of the tourism business”, 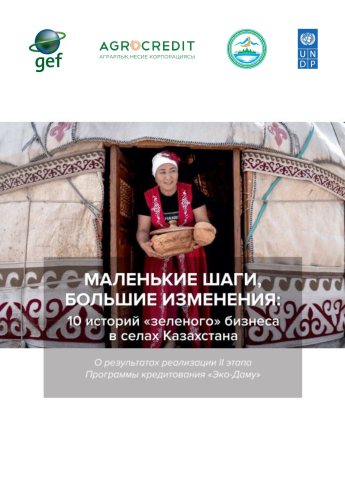 Small steps, big changes: 10 stories of green business in the villages of Kazakhstan

To date, within the framework of the “Eco-Damu” programme (stages I-II),  43 women-led initiatives have been funded totalling ₸137.4 million. Phase 2 of the concessional lending programme will last until end 2024.

On the eve of the UN global campaign “16 Days of Activism Against Gender-Based Violence”, the United Nations Development Programme and Nazarbayev University Schoo...

UNDP plays a key role in supporting the integration of the Sustainable Development Goals into strategic planning and aligning public finances with them. UNDP cont...