Our pre-history and our future on one Delaware beach 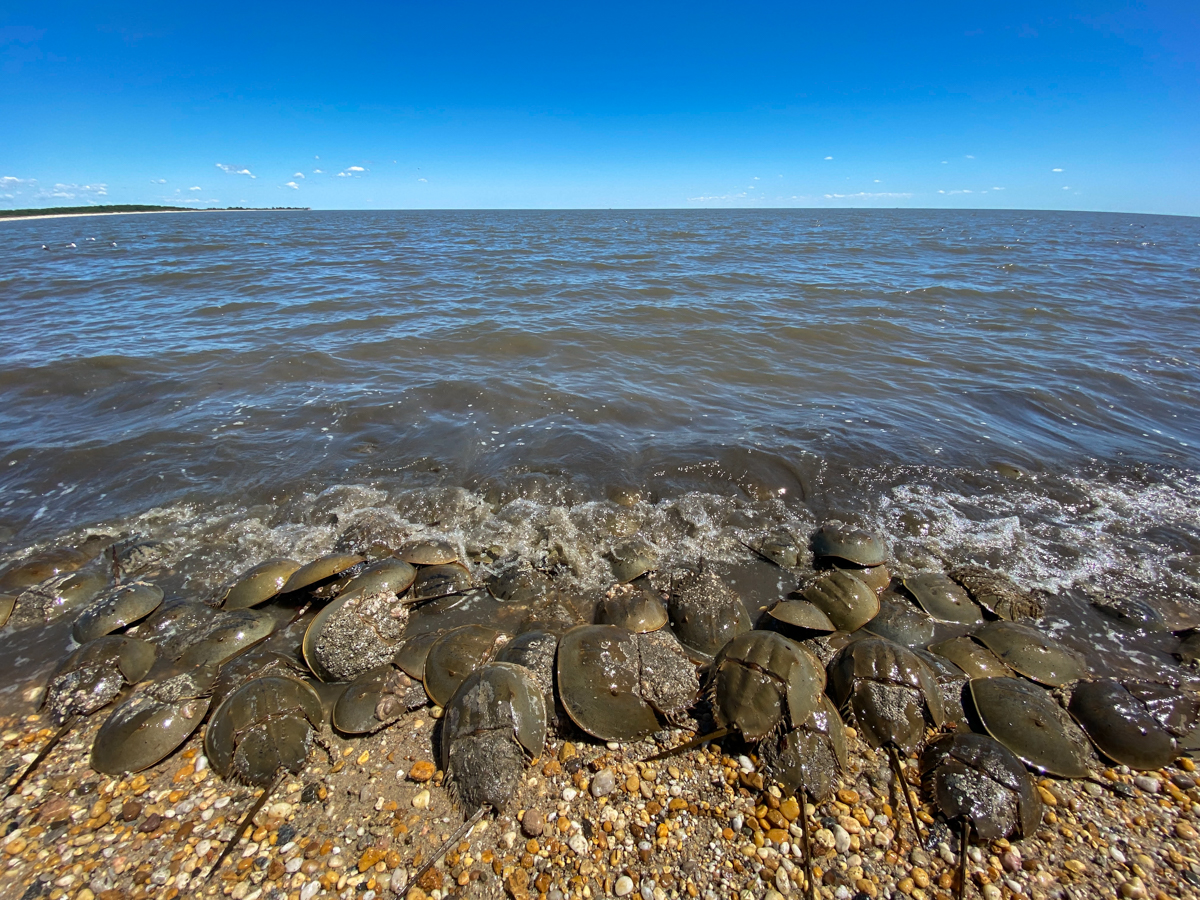 Horseshoe crabs on a Delaware beach.

A new moon, it is almost midnight and I’m on a beach in Delaware, three hours drive from New York, watching horseshoe crabs coming to the surf line to spawn. They are not actually crabs, but arachnids. Their closest biological relatives are ticks, spiders and scorpions. Their bodies flout all normal rules. They have ten eyes, or some say nine, some on their spiky tail. They look like helmets, some of their shells have crusts of barnacles or wafting wigs of seaweed.

They are my choice of ambassador for International Day for Biological Diversity 2021.

The horseshoe crabs I am watching on this long Delaware beach pre-date anything I can imagine. The dinosaurs, the Himalayas, the Andes, religions, and us. They have been on this planet for more than 450 million years, and despite five mass extinctions, have not changed very much. They help millions of other living things. Their shells offer home and shelter to sponges, mussels and snails. Their eggs feed birds, fish and other marine creatures. With the massive landing of the crabs, come migratory birds. Red knots start in Tierra del Fuego in Argentina, fly all the way to the Arctic to breed via the crab spawning beaches of Delaware and other pit stops. They stay for one month and every minute, every egg, is important. Refuelled, they then reach the Arctic and of course they fly all the way back.  Simply amazing!

I watched this event with a sense of childish excitement. It was a “wow” moment. It was a what will happen next. It is what biodiversity means. Easy to forget it, if you don’t see it. Or easy to describe it in my office in official language about UNDP’s work on nature. But what I saw happening on that Delaware beach last week was ancient, present, and indifferent.  A horseshoe crab has its own agenda!

The copper based blue blood of horseshoe crabs stubbornly destroys bacteria. Their blood is used for testing the safety of vaccines, including COVID-19 vaccines, for assessing safety of prosthetics and organ transplants and many more. Apparently, there is no other test that can analyse the purity of medications and cleanliness of medical devices with the same accuracy as the horseshoe crab blood. Horseshoe crabs save so many lives every year, especially in this time of crisis. It has very probably saved yours and mine. Horseshoe crabs ‘donate’ 30 percent of their blood and get released. In South Carolina, you can get a prison sentence for messing with them.

I chose the horseshoe crab as my biodiversity ambassador for several reasons. One involves time. They first emerged in the Ordovician Period 450 million years ago, more than 447 million years before the first human, Homo habilis, and 219 million years before the first ever dinosaur on the Earth. My hero, Sir David Attenborough, and I share a birthday—May 8. He is 95 and his lament in A Life on Our Planet released last year was that so much had changed so quickly. Watching these crabs, I felt that keenly. Sixty-six percent of wildlife populations have gone in my lifetime. In the next few decades, a million species may become extinct.

In times past, the local Delaware apple farmers paid children for a sack of horseshoes and used them for fertilizer. The crabs were forever.

While taking videos and photos on that beach, I suddenly imagined the same beach with no horseshoe crabs. If such a day comes, that will mean that we have failed. Humanity will not have protected the biodiversity that is our lifeline and safety net; our precious resource and source of joy, inspiration and wellbeing. We will have flicked the switch on 450 million years of survival. And when that light goes out, so do so many more.

The crabs are still coming, the birds still fly and feast, and it is not too late. We just need to give biodiversity its space. If we give it, those crabs might make another 450 million years.

PS: In non-crab related news! #BiodiversityRocks. This is the hashtag of the Global Youth Biodiversity Network for the biodiversity day. Love it!