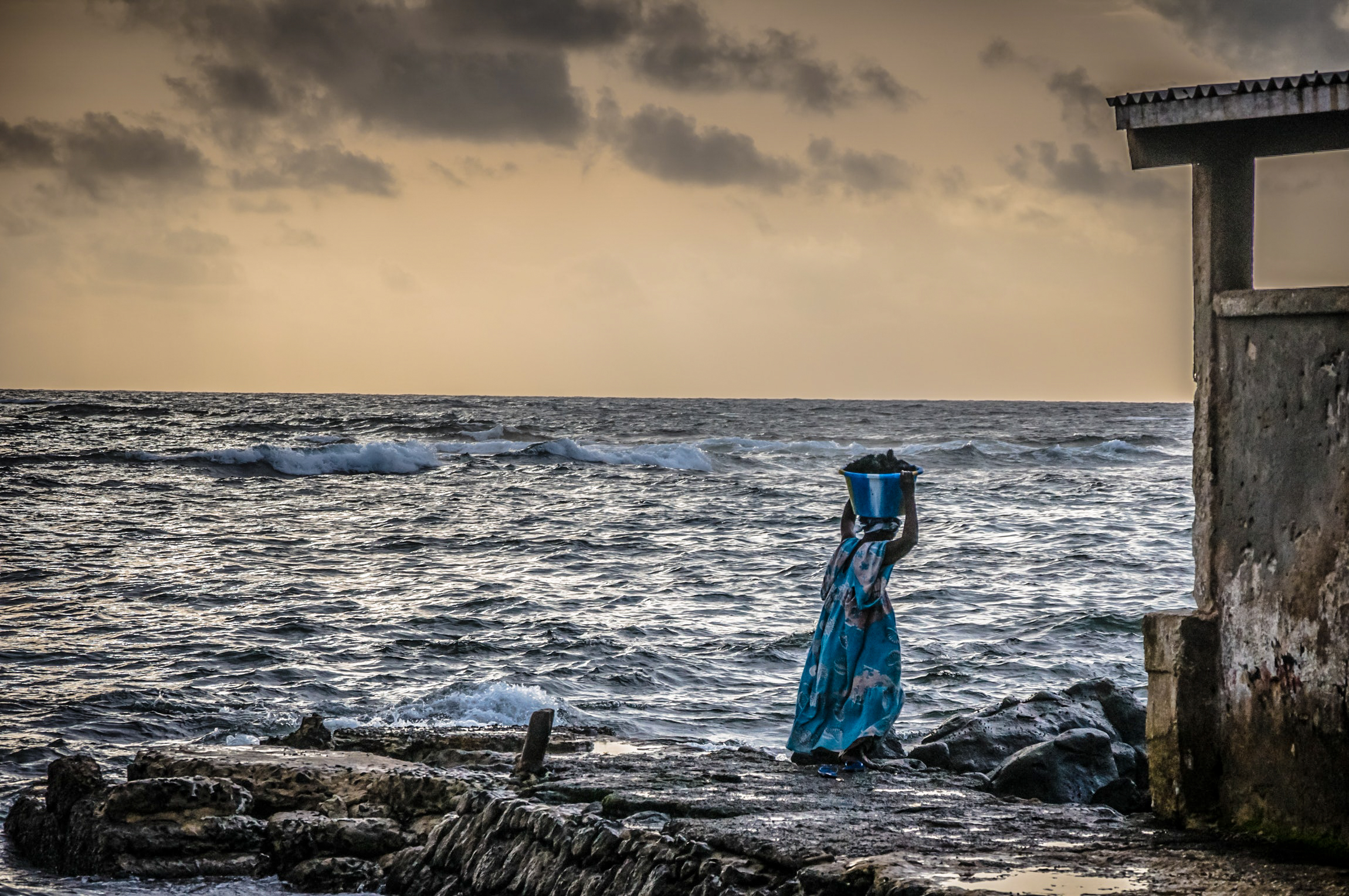 In Senegal, a woman carries seafood on the shore. The West African coast is one of the world’s most productive fishing zones. However, in recent years, ecosystem decline, overfishing and the impact of climate change have depleted fish stocks, increasing food insecurity and regional conflict, and driving migration.

When Boko Haram attacked Tchiolemé Mallama’s village in northern Cameroon, they kidnapped his wife and seven of his children, stole his cattle and goats, and left his farm unsafe to grow crops.

Tchiolemé, his daughter and granddaughter, are now displaced from their home and separated from their traditional culture. Life is much harder, and they no longer have safety, food security, a farm or an income.

The nexus between violent extremism and climate change

Tchiolemé’s family are just some of the hundreds of thousands of global victims of violent extremism. And while this extremism may not be directly caused by climate change, their plight and suffering is linked to the climate emergency. Cameroon, along with the rest of the Lake Chad Basin, is one of many places around the world where violent extremism in recent years has coincided with an increase in environmental fragility and degradation, and competition for natural resources.

Climate change is leading to rising sea levels, extreme weather, droughts, desertification and floods. These can disrupt livelihoods, incomes, farms and livestock, which can worsen inequality, and drive instability, insecurity and poverty. In many places, climate change is also directly tied to the drivers of migration and displacement, disease outbreaks, food shortages and weaker health care systems.

All these factors can make it easier for extremist organizations to recruit members. Of the 20 countries most vulnerable to climate change,12 also face on-going conflict. “Climate disruption is a crisis amplifier and multiplier,” to quote UN Secretary-General, António Guterres. From Central Asia to Africa, fragile and natural resource poor communities are providing fertile ground for violent extremist groups to flourish and extend their reach.

Climate change can aggravate other root causes, such as complaints against the security sector, limited confidence in governance and the rule of law, rising inequality, rapid social or cultural change, or a lack of inclusive development. Many of these issues have also worsened due to the COVID-19 pandemic.

Recent examples include Syria, where the civil war was preceded by a drought that caused 75 percent of farms to fail between 2006 and 2011; Iraq, which faced droughts, extreme flooding, and economic turmoil prior to the invasion by ISIS, who were able to capitalize on the ensuing poverty to recruit members and sow discord; and Yemen, which has seen its recent conflict exacerbated by drought.

Tackling climate change and conflict together

Extremist groups pose a significant challenge to building and maintaining peace. To tackle this issue, UNDP has been exploring ways of connecting the dots between, climate, environment, peace and security.

We have been addressing climate change and violent extremism in a number of places. In conflict-affected Sudan, UNDP is working to stabilize drought-affected communities by helping to restore livelihoods. In Tanzania, we are teaching more than 860 young people marketable skills and helping them start their own businesses. In the Lake Chad region, where a violent extremist insurgency continues against the backdrop of a fragile and stressed environment, UNDP and local partners are supporting the implementation of the Regional Stabilization Strategy, which will result in enhanced cross-border cooperation on security and stabilization, early recovery and improved development. It is hoped that this boost to livelihoods will reduce the appeal of organizations like Boko Haram. Through the SDG  Climate  Facility, UNDP is working with returnees to the Iraqi marshes by installing solar panels that will ensure clean water, as well as helping to boost the local economy by promoting eco-tourism.

UNDP recently organized a high level virtual forum to discuss the impact of climate security and violent extremism on peacebuilding. We are also supporting research and thought leadership on the issue, with the findings from a recent UNDP/OCSE study in Central Asia proving critical for understanding the connections between climate change, environmental degradation and insecurity in the Fergana Valley, where long-standing tension has in the past erupted into violence between Kyrgyz, Uzbek and Tajik ethnic groups.

UNDP’s solution to preventing violent extremism must be risk-informed - and climate change is one of the systemic risks to consider. We can learn new insights by integrating climate change research and perspectives into peacebuilding, which will help ‘climate proof’ conflict prevention and peacebuilding projects, processes and institutions in the future.  Climate action is an opportunity, a new entry point, to help us do peacebuilding better. Incorporating climate security and preventing violent extremism can help us develop “win-win” solutions. The development, human security and prevention efforts we pursue today will help us avoid the harder security challenges of tomorrow.

Watch From Cause to Action: The Impact of Climate Security and Violent Extremism on Peacebuilding from the 2021 Stockholm Forum on Peace and Development.