Building climate resilience and hope in West and Central Africa 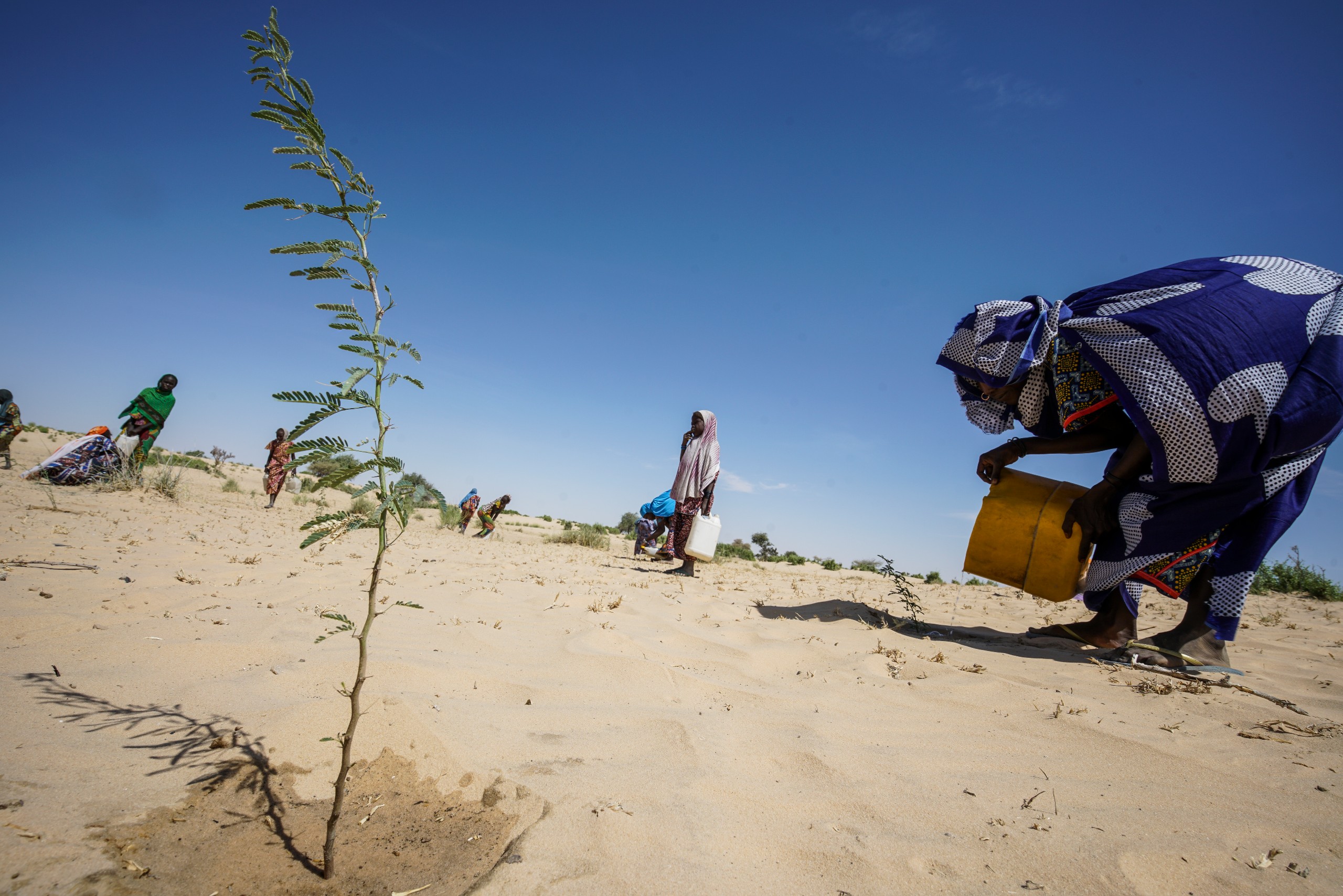 In the Lake Chad Basin, cash-for-work initiatives aim to stabilize the region, so displaced persons can return to their communities.

With many West and Central Africa countries constantly placed at the top of the global fragility rankings, understanding the interconnectedness, impact and opportunities presented by climate and environmental trends in the region has become imperative to our collective survival.

Endowed with abundant natural resources and abundant and growing human capital, the region has struggled to optimize these opportunities. This is primarily due to the recurrence of natural, environmental and climate change-related disasters as well as manmade insecurity orchestrated by political instability and displacement of populations both between and within countries.

Shadowed by the COVID-19 pandemic, the past 18 months have revealed how inextricably linked our wellbeing is to that of the planet. During this period, while humanity recorded a decline in socio-economic activities and mobility, the world recorded an uptick in waste pollution, putting pressure on our biodiversity and exacerbating the climate crisis.

From the Sahel to the Congo Basin, we have seen how homes and families have been impoverished by disasters like floods, droughts and volcanic eruptions. According to the World Bank, the pandemic has pushed an estimated 23 million people in sub-Saharan Africa into poverty.

In the Sahel region, home to over 300 million people – projected temperature increases of 3°C to 6°C are twice as much as in any other part of the world. This increase is expected to exacerbate droughts, contribute to river flow declines, floods, heatwaves, locust infestations, agricultural losses and recurrent food crises.

These challenges remind us of how our actions influence the world we live in and undermine our existence.

However, there is hope.

The interplay of climatic and environmental risks with socio-economic and political realities of fragile contexts warrants a systemic and multi-risk approach that mobilizes all our assets in West and Central Africa to accelerate sustainable development.

Renewed efforts are being taken under the United Nations Implementation Strategy for the Sahel to address the root causes of crises and underdevelopment in the region across three pillars – governance, resilience and security.

Through initiatives such as the Sahel Resilience Project, we leverage the mandate and convening power of regional organizations such as the African Union, ECOWAS, and national governments of seven Sahelian countries to build the resilience of communities to disasters and climate change.

By supporting countries with the implementation of the Sendai Framework through improved disaster and climate data analysis and their application in decision making, we create pathways to transition to a risk-informed development trajectory. This is critical to preventing further erosion of hard-earned development gains.

Our continued support to establish multi-hazard early warning systems in Africa and countries in the region emphasize the importance of timely action to save lives.

In the Lake Chad Basin, where conflict and environmental fragility make communities more vulnerable to climate change, further undermining livelihoods and exacerbating the competition around scarcer natural resources, the UNDP Stabilization Programme provided over 5,000 households with livelihood support through cash for work. Such efforts boost economic activity in the region, making it possible for those displaced to return to their communities.

Construction and rehabilitation of forest protection offices, schools, hospitals, houses, market stalls, justice and security facilities also contribute to building community resilience to conflicts and climate risks in line with the Lake Chad Basin Regional Strategy for Stabilization, Recovery, and Resilience. The Lake Chad Basin Commission is also embarking on a more strategic and longer-term solution to improve the hydraulic capacity of the lake to increase water access from tributaries and its preservation.

We also see opportunity in Central Africa. For example, the Congo Basin forests are endowed with a significant climate change mitigation potential. They are essential contributors to countries' Nationally Determined Contributions under the Paris Agreement. These forests contain between 25 billion and 30 billion tons of carbon in their vegetation, representing approximately four years of current global anthropogenic emissions of CO2. Protecting an additional 1 percent of forests in the Congo Basin would preserve 230 million tons of carbon or about a third of the UK's annual greenhouse emissions.

While we acknowledge the challenges prevalent in the region, we also recognize its potential. With collective action and strategic investments in resilience, the West and Central Africa region is set to rise.