UNDP Rwanda is one of eight country offices in the world that currently hold a Gold Certification in the Gender Equality Seal Initiative!

Why is ‘gender’ important to the UNDP?

To understand why ‘gender’ is important to us in UNDP, we first need to understand what ‘gender’ is and how it relates to our mandate as a global development agency. As most of us know, gender and sex are not the same. Sex is the biological difference between men and women. Gender, on the other hand, refers to the social and cultural roles we assign to men/boys and women/girls based on their sex. In almost every society, the freedoms and opportunities that women/girls and men/boys enjoy are often based on the gender roles that they have been assigned in their societies. Many men/boys and women/girls are not able to live meaningful and fulfilling lives and are not able to contribute fully to their societies or make the best use of their talents and abilities because of these gender roles and barriers that society has created for them.

This is why the advancement of gender equality and women’s empowerment is a key mandate of the UNDP. Not only do we believe that gender equality is a fundamental issue of providing women/girls and men/boys with equal rights and opportunities, but we also know, from decades of research, that societies and nations cannot develop fast enough if men and women are not provided with equal opportunities to use their abilities and contribute to their country.

Research also shows that gender overlaps with all other social identities, including: socio-economic status, geographic location, migration/refugee status, ethnicity, race, religion, disability, and age. For instance, a woman who is visually impaired may experience gender inequality in tandem with discrimination based on ability. Since her experience cannot be divided, fighting gender inequality for this woman will also mean fighting against policies and norms that discriminate against the blind. Since gender cannot be separated from the multiple identities with which it intersects, it is critical to advance gender equality and women’s empowerment across all areas of UNDP’s work.

What is Gender Seal Certification?

The Gender Seal initiative is a corporate certification process that recognizes UNDP Country Offices for their efforts and achievements in promoting gender equality and women’s empowerment. But it is also a tool that supports and empowers managers and staff in identifying and making changes needed to support gender equality at the workplace.
The Gender Equality Seal establishes minimum acceptable quality standards. Country Offices are certified based on a review of their gender equality accomplishments. More specifically, the GE Seal initiative is supported by a benchmarking matrix which is organized into seven sections. Each section reviews progress that the Country Office makes in areas such developing management systems, creating an appropriate enabling environment, building management and capacities on gender equality, promoting knowledge and awareness, mainstreaming gender into programmes and so forth. In total there are 80 indicators that help to assess progress in each of the 7 major dimensions of the Gender Equality Seal. Offices must make adequate progress in all 7 areas and across the 80 indicators to receive either a Bronze, Silver or Gold certification.

UNDP in Rwanda earned the Gold standard through the implementation of numerous gender-equality promoting activities, both internally and externally. In particular, the independent assessors highlighted the following achievements:

• A Partnership with The National Forum of Political Organizations to increase, diversify and improve women’s political experience.
• The creation of a Gender Desk for the Rwanda National Police, which has helped to change the discourse surrounding gender-based violence from a 'domestic issue' to a national issue.
• Support to the Financial Inclusion and Youth Connekt programmes, which together, extended financial access to hundreds of thousands of women and led to the creation thousands of temporary and permanent jobs for women.
• Support to the initiation of the Gender Seal within the Private sector initiative.
• Support for the National HeForShe Campaign, the Gender Audit of the Justice Sector, and the Gender Evaluation of the Economic Development and Poverty Reduction Strategy (EDPRS) 2.
• Extensive changes in internal policies, procedures and working arrangements to facilitate female and male staff.

Throughout this process UNDP has demonstrated its ability to foster an equitable, safe and accommodating workplace, while sharing knowledge on gender-equality and partnering with a range of stakeholders to support programmes and projects that further gender equality and women’s rights in the country. 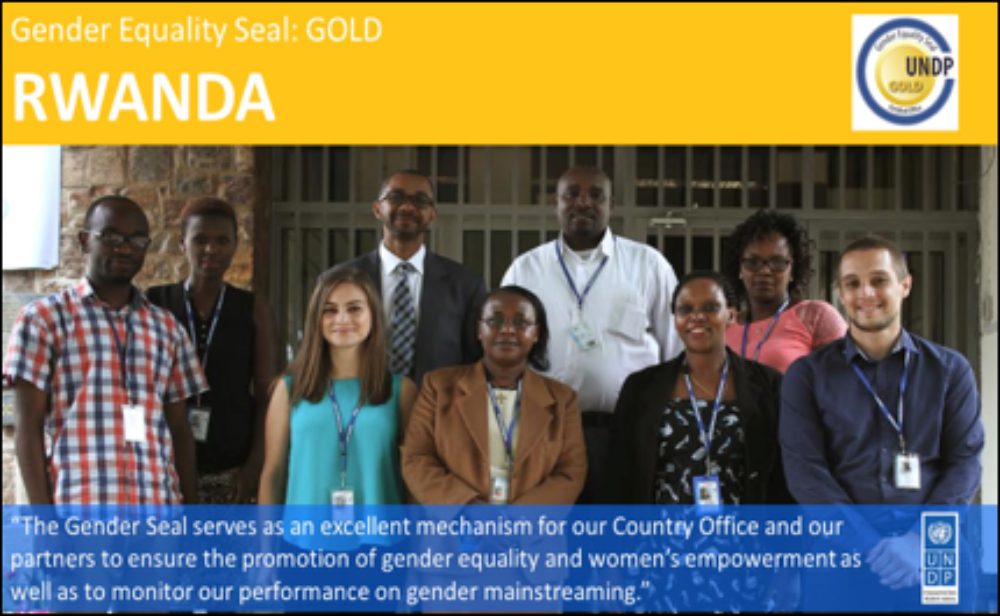 What are the Benefits of Gold Certification?

Obtaining Gold Certification is beneficial in many different ways. Among them, it demonstrates that the Country Office is progressing toward gender parity at all levels of administration and operation. It provides an inclusive and safe environment for all staff within the Country Office to operate. Furthermore, it shows that staff understand their duty and responsibility to mainstream gender into all projects, initiatives, and partnerships. The internal changes made as a result of the Gender Seal process have also resulted in a major boost in staff morale and motivation. Finally, a Gold Certification also provides the Country Office with legitimacy to promote the seal in the public and private sector and with other development agencies.

What are the Next Steps?

Since 2018, UNDP Rwanda has continued to push forward with its work on gender equality. Some of the recent and upcoming projects and initiatives include:

• Integration of gender equality concerns into the next generation of UNDP supported programmes for 2018-2023.
• Partnership with the Media High Council and Rwanda Governance Board to facilitate the training of female reporters.
• Partnership with Profemme and the Gender Monitoring Office to train over 300 women political candidates for the 2018 Parliamentary elections.
• Reviewing initiatives such as Youth Connekt to enhance impact on gender equality and women’s empowerment.
• Conducting sexual harassment and work-life balance seminars for UNDP staff.
• Continuing the Gender Seal in the Private Sector programme, which is currently working with 20 companies in the public and private sectors to assess their progress on gender mainstreaming and provide recommendations for improvement.
• Disseminating the 2018-2021 Gender Equality Strategy for UNDP Rwanda, which is aligned with the UNDP Global Gender Equality Strategy and outlines the Country Office’s vision for the promotion of gender in projects and programmes.

UNDP Rwanda is striving to meet all the benchmarks necessary for continued Gold Certification. Importantly, this goal has less to do with the honor of certification, and more to do with our commitment to deliver transformational gender equality results as well as to more effectively help women/girls and men/boys to live meaningful and fulfilling lives filled with greater freedoms and equal opportunities.

There is no single understanding of gender equality and women’s empowerment. The meaning, implication and reality of these terms can change throughout different l...