Pakistan's Vision 2025 reaffirms the need to make economic growth inclusive and sustainable in order to eradicate poverty. It also recognises that poverty is multidimensional, encompassing not only monetary deprivation but also the inaccessibility of healthcare, education and other amenities for all communities across the country.

In accordance with the Government's commitment to eradicate poverty, this report presents Pakistan's first national Multidimensional Poverty Index (MPI) based on the Alkire- Foster methodology. It has three dimensions: education, health and living standards. To tailor the measure to Pakistan's context and public policy priorities, 15 indicators were used for this national measure, instead of the 10 employed for the global measure. Within these 15 indicators, three indicators are included under the dimension of education (years of schooling, child school attendance, and educational quality), four under health (access to health facilities/clinics/Basic Health Units (BHU), immunisation, ante-natal care, and assisted delivery) and eight under living standards (water, sanitation, walls, overcrowding, electricity, cooking fuel, assets, and a land/livestock indicator specifically for rural areas). Each of the three dimensions carries an equal weight of 1/3 of the MPI. The weights of the component indicators within each dimension are equal unless another justification is provided, as outlined in Section 2.1.3. Overall, a person must be deprived in 1/3 of these weighted indicators to be identified as multidimensionally poor.

Multidimensional Poverty at a Glance
Applying this measure to data from the Pakistan Social and Living Standards Measurement (PSLM) survey for the 2014/15 period, we found that the country's Multidimensional Poverty Index stands at 0.197. This indicates that poor people in Pakistan experience 19.7% of the deprivations that would be experienced if all people were deprived in all indicators. Secondly, it must be noted that the MPI is a product of two essential components: the poverty “headcount” and the “intensity” of deprivation. Using the same data from the 2014/15 PSLM survey, the country's multidimensional poverty “headcount ratio” was estimated at 38.8% of the population. This means that 38.8% of the population of Pakistan are poor according to the MPI. The average intensity of deprivation, which reflects the share of deprivation which each poor person experiences on average, is 50.9%.

There are stark regional disparities in poverty across Pakistan. The proportion of people identified as multidimensionally poor in urban areas is significantly lower than in rural areas – 9.4% and 54.6%, respectively. Further heterogeneities were found when looking at results at the provincial level. In 2014/15, MPI headcount ratios ranged from 31.4% in Punjab (with an intensity of 48.4%), to 71.2% in Balochistan (with an average intensity of 55.3%).

With respect to the percentage which each of the 15 indicators contributes to overall multidimensional poverty in Pakistan, the greatest contribution to national poverty derives from years of schooling (29.7%), followed by a lack of access to healthcare facilities (19.8%) and child school attendance (10.5%). If aggregated by dimensions, the greatest contribution to poverty stems from educational deprivation (42.8%), followed by living standards (31.5%) and healthcare (25.7%).

At the district level, Larkana, Attock, Malakand, T.T. Singh and Hyderabad have made the most progress, reducing absolute poverty headcount ratio by more than 32 percentage points. In relative terms the best performers were the districts of Islamabad, Attock, Jhelum, Lahore, Karachi and Rawalpindi. On the other hand, some districts have experienced an increase in their poverty incidence. In absolute and relative terms, the districts of Umerkot, Harnai, Panjgur, Killa Abdullah and Kashmore have witnessed the highest increase in incidence of poverty.

This report provides a detailed description of these results and disaggregates Pakistan's MPI by indicators, geographical regions and sub-groups. While the report closes with a series of specific recommendations, all of the findings are provided with the intention to help the Federal and Provincial Governments in targeting poverty through improved policy reform and public spending. 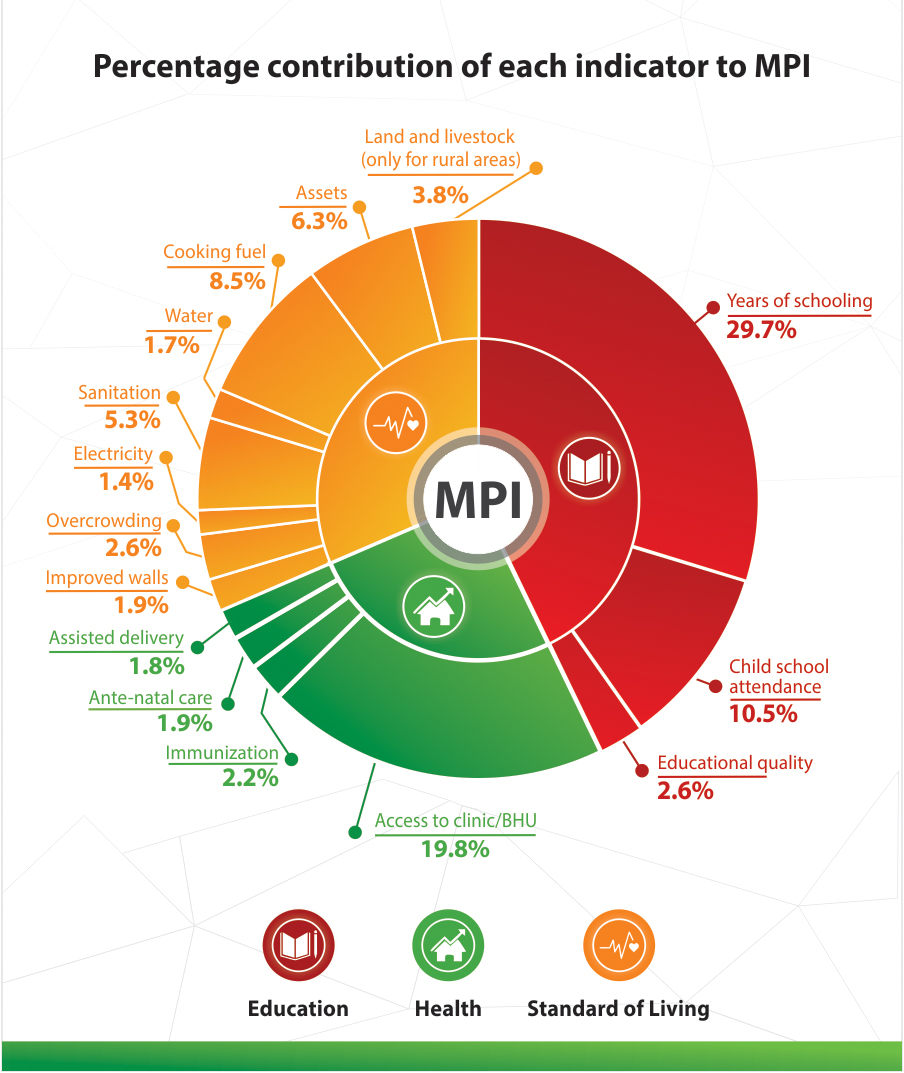 The MPI can be used to create a comprehensive picture of people living in poverty, and permits comparisons across regions, urban/rural location, and other key household and community characteristics.

FINANCING A GREEN FUTURE Climate change is the gravest challenge of our time and how fast and extensively it is transforming the world does not need to be su...

Inclusive Growth in Times of Uncertainty

The “Climate Equity: Women as Agents of Change” Report has been jointly produced by the National Commission on Status of Women and UNDP Pakistan. The findings o...

UNDP Pakistan, in partnership with the Ministry of Foreign Affairs, Government of Pakistan, launched ‘Leveraging Private Investments for Pakistan’s Sustainable ...

From Conflict to Connectivity

In this issue of Development Advocate Pakistan (DAP), dedicated to the themes of regional connectivity in South and Central Asia, a wide range of national and i...

The main objective of the survey was to gauge the perception and knowledge regarding climate change among the youth of Pakistan. The survey aimed to collect inf...