Islamabad, 20 April 2022—The Federal Steering Committee (FSC) of the ‘Deliver Justice’ programme was held today at the Economic Affairs Division (EAD), where key federal and provincial government stakeholders and development partners came together to amplify programme oversight and to discuss challenges and opportunities.

The ‘Deliver Justice’ programme aims to support reform processes to ensure delivery of people-centered justice, enhance access to justice for all, particularly women and marginalized groups; and improve service delivery of the security sector in line with constitutional safeguards and international standards. Implemented in Balochistan, Khyber Pakhtunkhwa and the Merged Areas, the programme is funded by the European Union and jointly implemented by United Nations Development Programme (UNDP), United Nations Entity for Gender Equality and the Empowerment of Women (UN Women) and United Nations Office on Drugs and Crime (UNODC).

Joint Secretary Economic Affair Division, Ms. Anita Turab chaired the meeting and thanked the European Union for its continued support for the rule of law and building capacity of relevant institutions. In her opening remarks, Ms. Turab emphasized that the Government of Pakistan has a strong commitment and interest in reinforcing the rule of law and justice system in Pakistan. She added, “The Government of Pakistan is pleased to partner with UNDP, UNODC and UN Women to implement the reform agenda smoothly under the EU-funded Rule of Law Programme in KP and Balochistan.” 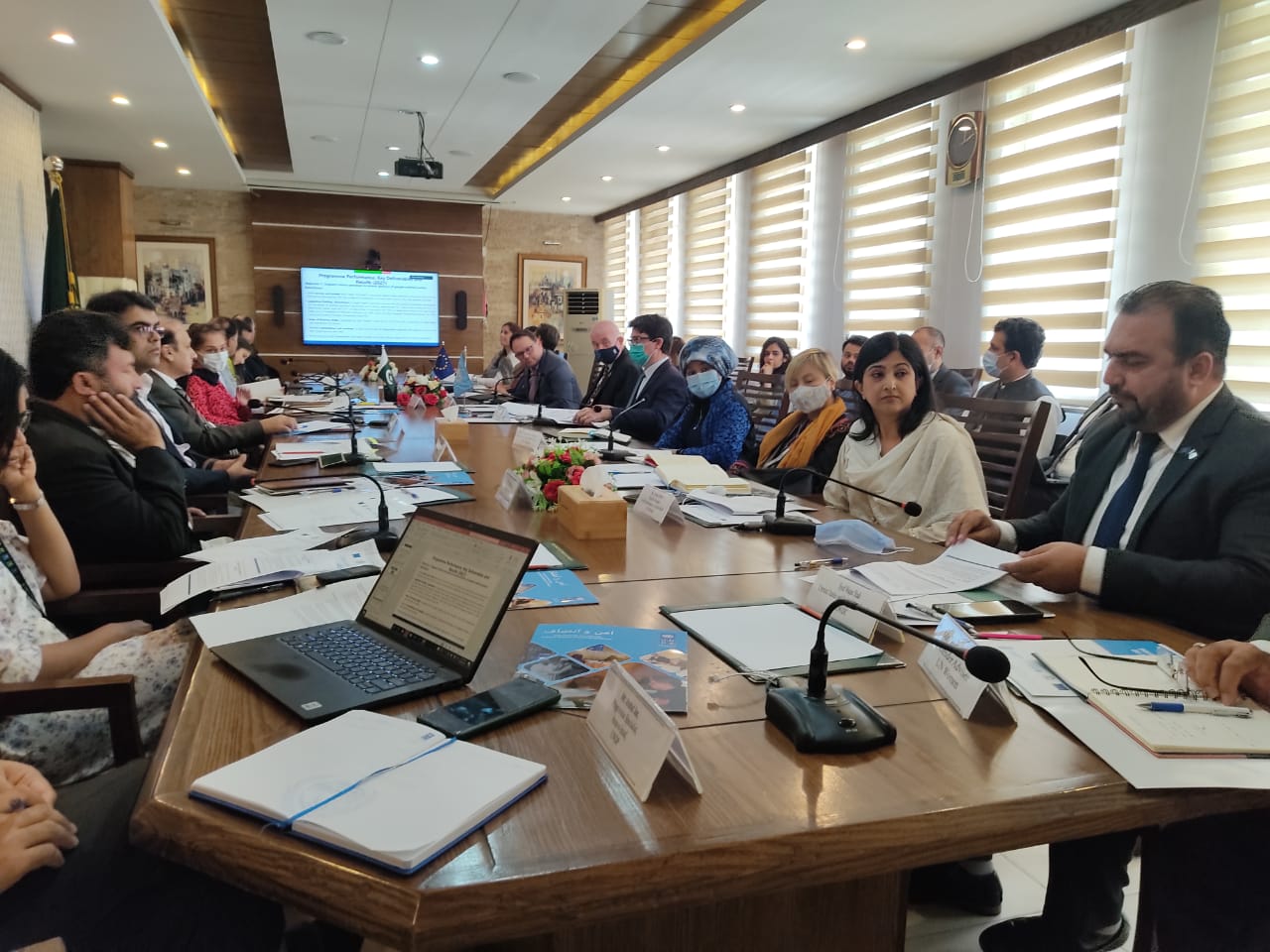 In his welcome remarks, the Head of Cooperation of the European Union Delegation to Pakistan, Mr. Ovidiu Mic, reiterated the EU’s commitment to join forces with Pakistan to actively advance the delivery of justice, peace, and security for the people, particularly women and girls. He emphasized that “this work is also an essential part of the priorities of the EU-Pakistan Strategic Engagement Plan agreed in 2019.”

The inception phase of this programme last year provided the building blocks to support the current engagements and make a transition towards successful implementation of the programme. Enhanced partnerships at federal and provincial levels, engaging all key stakeholders in the rule of law sector including the Legal Aid and Justice Authority (LAJA) and the Law and Justice Commission of Pakistan (LJCP) at the federal level, the Judicial Academies, the Courts, the Home Departments and relevant offices, were recognised as key achievements under the project.

On the occasion, the UNDP Pakistan Resident Representative, Mr. Knut Ostby, thanked the Government of Pakistan and the European Union for their continued support in strengthening the rule of law and access to justice in Pakistan. He said, “UNDP has been a long-standing partner of the Government of Pakistan in supporting and strengthening Rule of Law institutions for enhanced service delivery, and improving access to justice for citizens, particularly the most vulnerable and the marginalized. UNDP is privileged to be a long-standing partner in the development and implementation of Rule of Law roadmaps.”

UN Women Pakistan Representative, Ms. Sharmeela Rassool, in her remarks said, “UN Women is delighted to be part of this joint programme, and the core of our work focuses on supporting women, girls, and vulnerable segments of society access formal justice mechanisms. While in parallel we will build up the capacity of our government partners to provide justice and redressal mechanisms in an efficient, empathetic and gender sensitive manner.”

UNODC Pakistan Representative, Mr. Jeremy Milsom, assured UNODC’s commitment towards accelerating progress and catalyzing valuable reform in rule of law and criminal justice system through this project. “This first FSC meeting marks yet another milestone for this programme. As we all know, Provincial Steering Committee meetings have been successfully conducted both in Balochistan and KP in January this year. We are looking forward to the success of this meeting as well.”

During the meeting, the work plan for the current year was presented to the committee. The work plan included working alongside law enforcement agencies to strengthen rule of law, including initiation of trainings for two thousand police personnel from the Merged Areas. Refurbishment of the Prison Academy, seven district prisons in the Merged Areas and five central prisons will also take place. For Balochistan, work will commence on establishing smart police stations along with Police Facilitation centers. This workplan also includes establishment of smart classrooms in Balochistan Judicial Academy and Police Training College, Quetta. Prison Management Information System (PMIS) is also planned to be developed and implemented in the prison facilities of Balochistan.

For additional information, please reach out:

UNDP is the leading United Nations organization fighting to end the injustice of poverty, inequality, and climate change. Working with our broad network of experts and partners in 170 countries, we help nations to build integrated, lasting solutions for people and planet. Learn more at undp.org or follow at @UNDP

UNODC is a global leader in the fight against illicit drugs and international crime. UNODC operates in all regions of the world through an extensive network of field offices. Learn more at unodc.org or follow at @UNODC

UN Women is the United Nations entity dedicated to gender equality and the empowerment of women. A global champion for women and girls, UN Women was established to accelerate progress on meeting their needs worldwide. Learn more at unwomen.org or follow @UNWomen

In 2021, UNDP continued its long-standing partnership with Pakistan to achieve its development goals and to ensure that no one is left behind. At the request...

Navigating the ecosystem: stories of Pakistani women in tech

More and more women need to occupy tech-spaces so they can be part of designing an inclusive future. To achieve this, it is essential that women are equipped with...

A gender strategy for the Anti-Narcotics Force (ANF) was launched by the Ministry of Narcotics-Control (MNC) in Islamabad today. The strategy aims to foster gende...