Our dynamic and multicultural team of professionals comprises competent and motivated persons with a strong belief in the purpose of UNDP and its mandate. The United Nations Development Programme (UNDP) in Guinea-Bissau is a proud equal opportunity employer, committed to promoting diversity and inclusion. UNDP gives equal consideration for employment to all qualified individuals and believes deeply in diversity of race, colour, religion, gender, sexual orientation, ethnicity, disability and all the other fascinating characteristics that make us different.

Mr. Tjark Marten Egenhoff (Germany) is the UNDP Resident Representative in the Republic of Guinea-Bissau.
He previously served as Vice President of Global Public Policy in cybersecurity and geopolitical risks at Bank of America in Washington, DC.
He has been a member of several Public and Multilateral Institutions, including the European Union and the Konrad Adenauer Foundation. He is a specialist in Inclusive and transparent democratic governance.
Mr. Egenhoff holds a Master's degree in International Relations from the Fletcher School of Law and Diplomacy (Boston, USA/2014), a Master's degree in European Studies from Humboldt-University (Berlin, Germany/2002) and Latin American Studies and Economics (University of Passau (Germany/2001).
Mr. Egenhoff speaks English, German, Spanish, French and Portuguese fluently.

Mr. José Gabriel Vitória Levy (Cape Verde) is UNDP's Deputy Resident Representative responsible for Programmes in Guinea-Bissau since July 2019.
He holds a PhD in Plant Physiology from the University of California, Davis, USA. He has held positions in programme and natural resources management, including various positions at the United Nations in Cape Verde and other UNDP offices since 2001.
Prior to joining UNDP Guinea-Bissau, Mr. José Levy was deputy resident representative and interim resident representative in Mauritania (2013-2019). He also served as a Specialist in Climate Change and Knowledge Management (2010-2012), in the Adaptation Program for Africa (AAP), based in Dakar, Senegal, with senior management responsibilities in 20 projects from African countries that are part of the Programme.
He began his career at the National Institute of Agricultural Research and Development of Cape Verde (INIDA), serving as the President of the Institute for several years.
Mr. José Gabriel Vitória Levy speaks Portuguese, English, French and Spanish fluently.

Ms Negar Arefi is the Deputy Resident Representative of UNDP responsible for Operations in Guinea-Bissau.
Prior to joining UNDP Guinea-Bissau, she worked as a Business Partnership Specialist at the Bureau for Management Services (BMS) in New York.
She began her career in UNDP Iran in 2005, in Operations and later rose to the rank of Deputy Resident Representative. She has done different short-term missions in different regions and offices.
Ms. Negar Arefi has a PhD in Business Administration and a Master's degree and Bachelor's in Industrial Engineering. 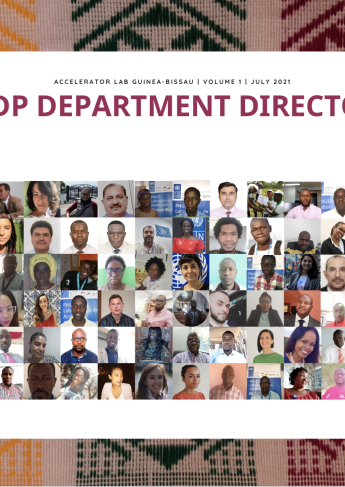