The 2022 African Economic Conference (AEC 2022), jointly organized by the African Development Bank (AfDB), the Economic Commission for Africa (ECA), and the United Nations Development Programme (UNDP), is planned with the theme “Supporting Climate-Smart Development in Africa”. It will be held in Balaclava, Mauritius, from 9-11 December 2022.

The conference will bring together a variety of stakeholders—including policymakers, climate experts, the private sector, researchers, and youth—to discuss the challenges posed by climate change, identify opportunities and strategies for adaptation and mitigation, draw lessons from successes, identify key strategies for financing mobilization and draft an action plan to support the low-carbon and climate-resilient development of Africa.

The AEC 2022 will be an opportunity to reflect deeply on the institutional capacities to build climate-smart development mechanisms and support our regional member countries to build resilience and transition to low-carbon development pathways. It will also be an occasion to reflect on how countries can actively rebuild better from the COVID-19 pandemic with climate-smart solutions.

The conference will provide a platform for established academics and young researchers alike to present their solution-oriented research to policymakers and decision-makers on how to strengthen Africa’s response to climate change and its ripple effects.

Africa’s vulnerability to climate change calls for innovative solutions. Agriculture employs half the African workforce, and over 90% of African agriculture is reliant on rainfall. It is expected that the vast majority of Africans and the African economy will suffer more from climate extremes, as extreme weather events become more frequent and severe, causing damage to agriculture, tourism, cities, infrastructure sectors, including water and energy systems, and even the extractive sector.

Adapting to climate change could cost the continent at least $50 billion annually by 2050. Yet Africa has the lowest per capita climate finance flows in the world, challenging the principles of true climate justice[1] (AfDB, 2022).

It is essential to Africa’s economic, social, and material well-being to develop climate change adaptation, mitigation, and transformation strategies by working with all key stakeholders, including farmers. The goal is climate-resilient, low-carbon development that boosts growth, fosters alternative energy production and reduces the energy deficit, especially in rural areas. While most of Africa’s limited emissions come from various forms of agriculture and land use, rather than from the energy sector, the continent has enormous potential for renewable energy—hydro, solar, wind, and geothermal power.

In Africa, green growth strategies can accelerate investment in resource-efficient technologies and industries, and manage costs and risks to taxpayers, businesses, and communities. Africa is increasingly alerted to the costs associated with high-carbon development and the benefits of renewable energy, sustainable land use, low-carbon development, and other energy services. Plans to integrate climate action with sustainable development are already being implemented, including in Ethiopia, Kenya, and Rwanda.

Despite these initiatives, climate finance inﬂows to Africa have failed to match the commitments made by developed countries and have not met the continent’s adaptation and mitigation needs (AfDB, 2022). Africa’s share in total global climate finance grew by only 3 percentage points on average during 2010-19, from 23% ($48 billion) in 2010-15 to 26% ($73 billion) during 2016-19. Given the resources needed to meet Africa’s Nationally Determined Contribution targets—estimated at $118.2–$145.5 billion a year until 2030—more concrete measures are needed to close Africa’s annual climate finance gap (AfDB, 2022).

When facilitating the mobilization of resources, it is essential to design programs that target both mitigation and adaptation and balance them comprehensively, and systemically. More research is critical to inform climate adaptation and mitigation policies and ensure sustainable and environmentally sound growth and development.

The AEC is the leading forum for discussing Africa’s pressing concerns. Its specific objectives are to:

Format of the conference

The seventeenth edition of the conference will be held physically. However, it will accommodate virtual attendees, where possible.

The conference will be organized around four pillars, each including a plenary session and parallel sessions that focus on key solutions to building, adopting, and implementing climate-smart strategies.

The four pillars are as follows: 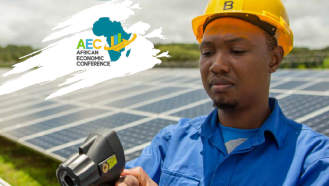 The African Economic Conference creates the space to have an honest conversation on Africa's development future and the urgent actions we need to take to realise Africa's promise.