Poverty in Myanmar has declined substantially, but one in four still poor, according to new report

Nay Pyi Taw, June 27, 2019 – The share of the population in Myanmar living in poverty has halved from 48.2 percent in 2005 to 24.8 percent in 2017. This is the key finding of a new Poverty Report launched today by the Central Statistical Organisation (CSO), with technical support from UNDP and the World Bank. The report is the second in a series of 3 reports produced based on the Myanmar Living Conditions Survey.

The Poverty Report provides updated estimates of poverty in Myanmar, with a focus on spatial differences. The report illustrates that poverty in 2017 is strongly correlated with where one lives: rural inhabitants in Myanmar are 2.7 times more likely to be poor than urban inhabitants. Poverty is the most prevalent in Chin State, where almost six out of ten people are poor, and in Rakhine State, where about four out of ten people are poor. At the other end of the spectrum Tanintharyi, Mandalay, and Yangon Regions have the lowest poverty rates, between 13 and 14 percent.

“This report is meant to contribute to the realization of Myanmar’s national targets of reducing poverty and inequality. The outcomes of the report are envisaged to bolster in developing sectoral policies, national and regional planning as well as monitoring and evaluation,” said H.E. U Soe Win, Union Minister of the Ministry of Planning and Finance, during his opening remarks at the launch event.

The report shows that despite a significant decline in poverty between 2005 and 2017, vulnerability remains an issue. Another third of the population is highly vulnerable to falling into poverty in the future, despite not being poor in 2017. While the poverty rate has declined since 2005, and the share of the population that is non-poor has increased, the share of those classified as vulnerable has grown by 18 percent.

The report provides evidence that poverty is associated with living in rural areas, low education, and employment in agriculture. 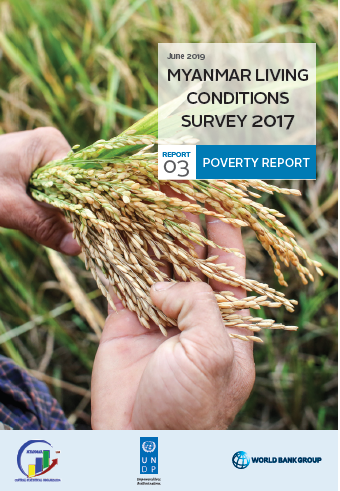 Diversifying sources of income beyond the agricultural sector tends to help households move out of poverty. Ownership of land is also an important determinant of higher welfare, particularly among households with members working in agriculture.

“We commend the impressive achievement in halving poverty between 2005 and 2017. Several states and regions are still lagging behind. Targeted interventions are needed to promote more inclusive growth and to ensure that all people can benefit from the economic progress Myanmar is experiencing. In this pursuit, Myanmar should continue to strengthen its statistical capacity and efforts at generating quality data,” said Gevorg Sargsyan, World Bank Head of Office for Myanmar.

“UNDP is very pleased to have worked with the World Bank and the Central Statistics Organisation to produce this path-breaking report. The findings of this report will be useful to help guide the implementation of the Myanmar Sustainable Development Plan in states and regions, and the localization of the Sustainable Development Goals (SDGs) at sub-national levels,” said Peter Batchelor, Resident Representative of UNDP Myanmar. “Such information is critical to promoting evidence-based policy making, and designing policies and programs that promote more inclusive and sustainable development.”

The Myanmar Living Conditions Survey is a comprehensive assessment of the well-being of the people of Myanmar. It provides reliable, accurate, and up-to-date data that can be used to inform policies for the future development of the country and to monitor the Government of Myanmar’s goals as well as the Sustainable Development Goals within the context of the 2030 Agenda for Sustainable Development.

The report is the second in a series of analytic reports that analyzes the data of 2017 Myanmar Living Conditions Survey. Further reports will be released later in 2019.

The COVID 19 pandemic is having significant and, probably, lasting consequences on the Myanmar economy. The effects of the pandemic have resonated well beyond the...

The Critical Value of PPE in Myanmar’s Mon State

To cope with the situation, Mon State has been working with the UN Development Programme, to try to control the spread of the virus through an Awareness Raising a...

The COVID-19 pandemic is the latest crisis facing the world, but unless humans release their grip on nature, it won’t be the last, according to a new report by th...

We are pleased to share with you the Legislative Drafting Guidebook developed jointly with the Union Attorney General Office (UAGO). The documents aims to guide M...