How living walls in cities can protect from noise and dust: an experiment from Podil district in Kyiv

“In order to change your city for the better, it’s not enough just to talk about it. The concrete steps should be undertaken. It’s not as difficult as it seems” Vlad Dehtiarenko convinced, a participant of Community Safari, the initiative for finding nature-based solutions for cities.

Vlad Dehtyarenko is a student, project manager of the public organization EcoClub "Green Wave". Last year, he joined the Community Safari organized by UNDP in Ukraine and the Agents of Change NGO in Kyiv. Five teams explored how to make one of the archaic districts of the capital greener and more comfortable for the citizens and suggested specific solutions, on implementation of which they will be working.

Adapting the city for the people

During the Community Safari, Vlad’s team chose a location of Podil district in Kyiv, which overlooks the highway. The activists went to the place, measured the so-called noise pollution, and found out that the noise level is outrageous: 80-100 decibels. This is almost twice as much as the average noise in the office. The purity of the air was also unsatisfactory. Residents of bordering neighborhoods complain that there is a lack of green areas and places to walk with children. After all, they either "hide" in their yard, or are forced to look for green areas elsewhere.

"We wanted people to have a place to spend time. Therefore, we came up with the idea to make a living wall. Such landscaping serves much more than just decor,” Vlad says. He explains that a living wall muffles noise, removes dust, creates additional shade, and becomes a cozy corner to pass the time in a nice way.

All the sketches and plans for the living wall were ready when the team figured out that they would not be able to do it in the place they had planned. Bridge construction began near the selected location. “Kyivzelenbud” warned the team that the live corner could be simply demolished, and advised to look for another location.

The team went on a safari again, this time seeking a new place to implement their idea. Eventually, such a place was found and a living wall "grew" on the waterfront.

"There is good soil and enough of moisture, so the plants will be able to put down the roots better," Vlad describes.

The 25-meter-long living wall looks in some other way than the team has initially planned, and stands in a different place. However, it exists, which is the most important matter for Vlad.

"Certainly, this is not 100% what we wanted, but the main task is done: the wall prevents dust, noise and makes Naberezhno-Khreschatytska Street more comfortable."

The Community Safari, organized by the UNDP Accelerator Lab, “Agents of Change” and “Green Wave” EcoClub, is an attempt to understand how activists can actually influence their city. The teams have experienced on their own that in order to achieve something, one sometimes needs to wait a long time for feedback and knock on the doors of different offices several times in a row.

Vlad explains that consequently another aim was born during this experiment: to test whether a small group of students can establish cooperation with enterprises and administrations and to achieve the desired. The examination was successful. "We have proved with our initiative that it is absolutely real. Ultimately, they will liaise with you," Vlad nods.

Perhaps the biggest challenge for Vlad was the team’s break up in the process of implementing the initiative. Due to delays, team members either lost interest or did not have the time or patience to wait, so they switched to other projects. However, it has not diminished Vlad’s motivation to finish the job. "Even when you're alone, you can always find like-minded people who will support you and your idea," he says.

Not giving up the goal halfway

The activist assures that everyone can take small steps towards big changes in their city: “Can't you find a phone number on the website of the utility company, call and resolve the issue? You can. Even when you are alone.” It is important to be patient and not leave the case halfway. "If you abandon your plan, things will definitely not improve. There will be a feeling that everything is in vain. Conversely, when you bring the case to an end, the fear will disappear and self-confidence will emerge,” he says.

Vlad Dehtyarenko is currently studying Finance at the Kyiv-Mohyla Academy. He has been a member of the “Green Wave” EcoClub for several years. He says that joined the organization to combine "pleasant with useful" and believes that the experience will be useful in the future: "If IT is popular now, then in ten years it will be ecology."

Vlad says that a living wall is an existing confirmation of everyone’s ability to make our space more environmentally friendly and comfortable. “All the projects you are planning are absolutely real. One can rant on the desire to make changes, or just go to a utility company and solve the problem. We have people who are either afraid to do it or they lack patience and time. Our example has proved that everything is possible." 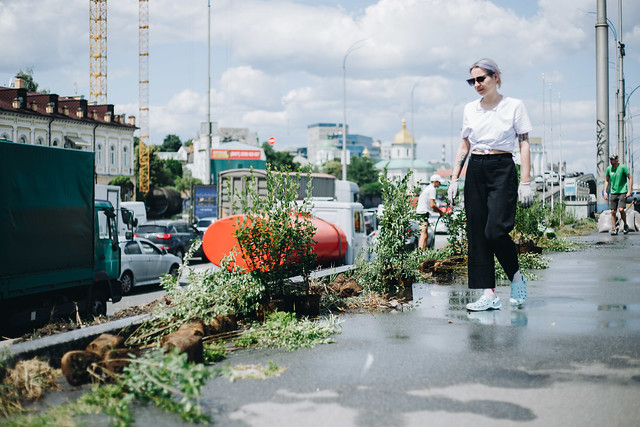 You can also join an online group of environmentally conscious changers.

Promoting education for all under the pressures of war

The United Nations Development Programme in Ukraine has joined forces with a famous local chef to explore the ecological, social and economic dimensions of feedin...

We see early indications that urban gardening has an enormous potential for strengthening social cohesion between the IDPs and host communities. The research furt...

Send us the information about creative solutions in the food security field that foster a strong social fabric and community mobilization. Are you implementing so...

Step 7: Creating a Portfolio of Initiatives and Projects for the Cities

From the previous steps of “The Butterfly Effect” project - system mapping, deep listening to nature and people, creation of insights and personas and the Hackath...