The three UNDP Goodwill Ambassadors joined the SDG Action Zone during the 75th UN General Assembly to share personal experiences during the pandemic and talk climate, inequality, and the challenges of being a working mom 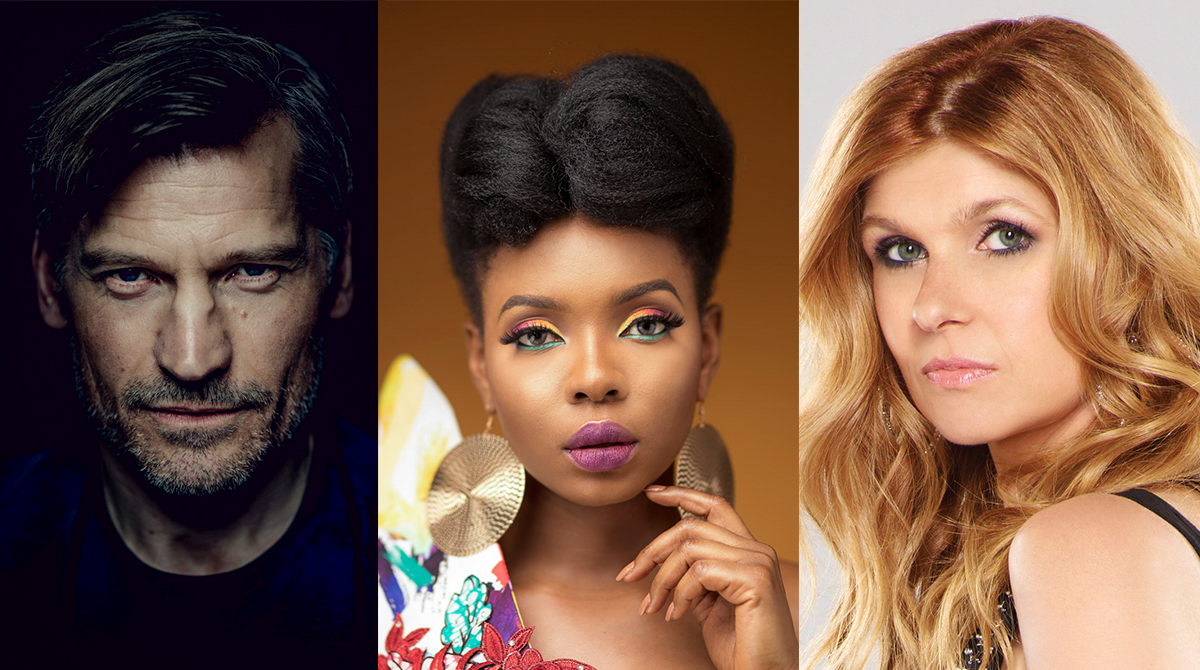 For Nkolaj Coster-Waldau (left), Yemi Alade (middle), and Connie Britton, an environmentally friendly and equitable recovery is possible, but it also requires bold leadership and urgent action across the whole of government and society

New York — UNDP Goodwill Ambassadors American actor Connie Britton, Danish actor Nikolaj Coster-Waldau and Nigerian musician Yemi Alade participated this week in thought-provoking conversations organized by the SDG Action Zone - an innovative space held during the United Nations General Assembly. The three advocates shared personal experiences and perspectives on the pandemic, focusing on the environment, women’s empowerment and the need to rebuild an economy that is green and equitable.

The COVID-19 pandemic has exposed the vulnerabilities of the people and the planet but has also provided an opportunity for the world to come out stronger. For Coster-Waldau, Alade, and Britton, an environmentally friendly and equitable recovery is possible, but it also requires bold leadership and urgent action across the whole of government and society.

"In one of your interviews you talked about why you sing in different languages and said 'in Africa, we have all these artificial borders, but the only thing that really separates us are languages. We have so much in common as human being – we have the same desires, the same wants, needs, dreams'. It was very inspiring to hear you talk about that," Coster-Waldau said, admitting to Googling the Nigerian Afro-pop star.

"My heart is like – ta-dum, ta-dum, I'm so happy you caught that! And I'm so happy you feel the same," Alade said. "These past five months with coronavirus have been a moment of remembering that health is actually wealth. Everything we've been chasing in this life, money and likes and passion – health is the most important thing."

Alade, who the day before today’s SDG Action Zone appearance was named the latest UNDP Goodwill Ambassador, said that she felt honored to support UNDP in its role as the UN’s leader on the socio-economic response to the COVID-19 crisis, helping countries recover better and stronger.

She stressed that recovery from COVID-19 needs to go hand-in-hand with climate action. Joining the conversation from her home in Nigeria, the musician explained that climate change and the degradation of the environment is very real in her home country.

“In Nigeria, we have to stop the deforestation. We need our trees. We need our green. And even though we are located in a part of the world that’s very hot. Every year gets hotter and hotter. And even the regular seasons for rain keep fluctuating,” Alade said.

“If we do not take this one opportunity that we have right now, I don’t think that an opportunity like that might come again soon,” Alade said. “Going green at a time when we are trying to help the world economy to recover would actually help everything recover better.”

“We have to change the way we do things. We have to go the green way. It has to be sustainable. If we do that, we actually have a chance to create a world for future generations that is cleaner and better than the one we live in now.”

Father of two girls, Coster-Waldau also emphasized the importance of addressing gender equality in the process: “When you include women in the solutions, countries do better.”

He tapped into the impact of COVID-19 in countries reliant on wildlife tourism, an industry that supports over 20 million jobs around the world and that accounts for 80 per cent of visits in many African destinations.

The Game of Thrones star pointed to UNDP’s initiative The Lion’s Share and how it is supporting communities dependent on wildlife-based tourism in Africa and other parts of the world.

“The Lion’s Share is about biodiversity. But it’s also about benefiting local communities. So you don’t separate the animals from the human beings. We are in this together. We need the world. And we need to preserve it.”

Coster-Waldau said his experience working with UNDP and meeting people from around the world has reinforced his fundamental belief in human beings: “We are definitely worth fighting for.”

What Connie Britton hopes for women around the world

American actor and producer Connie Britton engaged in a woman-to-woman, mother-to-mother conversation with Anjali Kwatra, Acting Director of Communications at UNDP on Tuesday, September 22. They discussed gender equality and how women are bearing the brunt of the pandemic.

Juggling work and potty training, having meetings interrupted by kids, and dealing with reluctant remote learners are some of the topics that came up in conversation.

“As I anticipate going back into production, I have to think about how I’m going to juggle my son’s education, quarantine, any kind of trouble, logistics, how I’m going to make sure that he is being taking care of, and learning while I’m working. That’s a huge challenge for me that I never had to confront before. But at least I have the internet and access to the technology we need,” said Britton, a single mom to a school-age boy.

She pointed to the fact that not everyone has been equally affected by the COVID-19 pandemic. Women who are struggling to make ends meet and lack any social protections have been hit the hardest by its socio-economic impact. UNDP reports that the pandemic will push 47 million women and girls into extreme poverty by 2021.

Britton pointed out that women are on the frontlines of the COVID-19 response, including as healthcare and service industry workers, and are playing a key role in ensuring the well-being and resilience of their families and communities.

“Globally, 70 percent of health and social sector workers are women. And in addition to that, the preponderance of domestic responsibilities globally fall upon women,” Britton said.  “We are trying so hard with the Global Goals to achieve gender equity by 2030 and this is taking a substantial toll, particularly on women, economically.”

“Fifty percent of men think that in times of crisis, men have more right to job opportunities than women do. So we really are still facing difficult cultural norms. It’s a steep uphill climb, because these ideas are so deeply entrenched in our ways of thinking and our culture that we don’t even realize that they are there,” Britton said, referencing findings from UNDP’s Gender Social Norms Index released earlier this year.

Britton addressed some of the gender bias she has encountered throughout her career. “We are seeing some progress, but still most roles and stories are mostly written by men for men,” she said, adding that “inequity in terms of pay is still very extremely prevalent and problematic in my business.”

“In this time of crisis we need to think more expansively on how to address these issues,” she said. “My hope is that we will continue to build strength for women around the world, as when women are empowered economically, we all prosper and benefit. I want that trend going”.