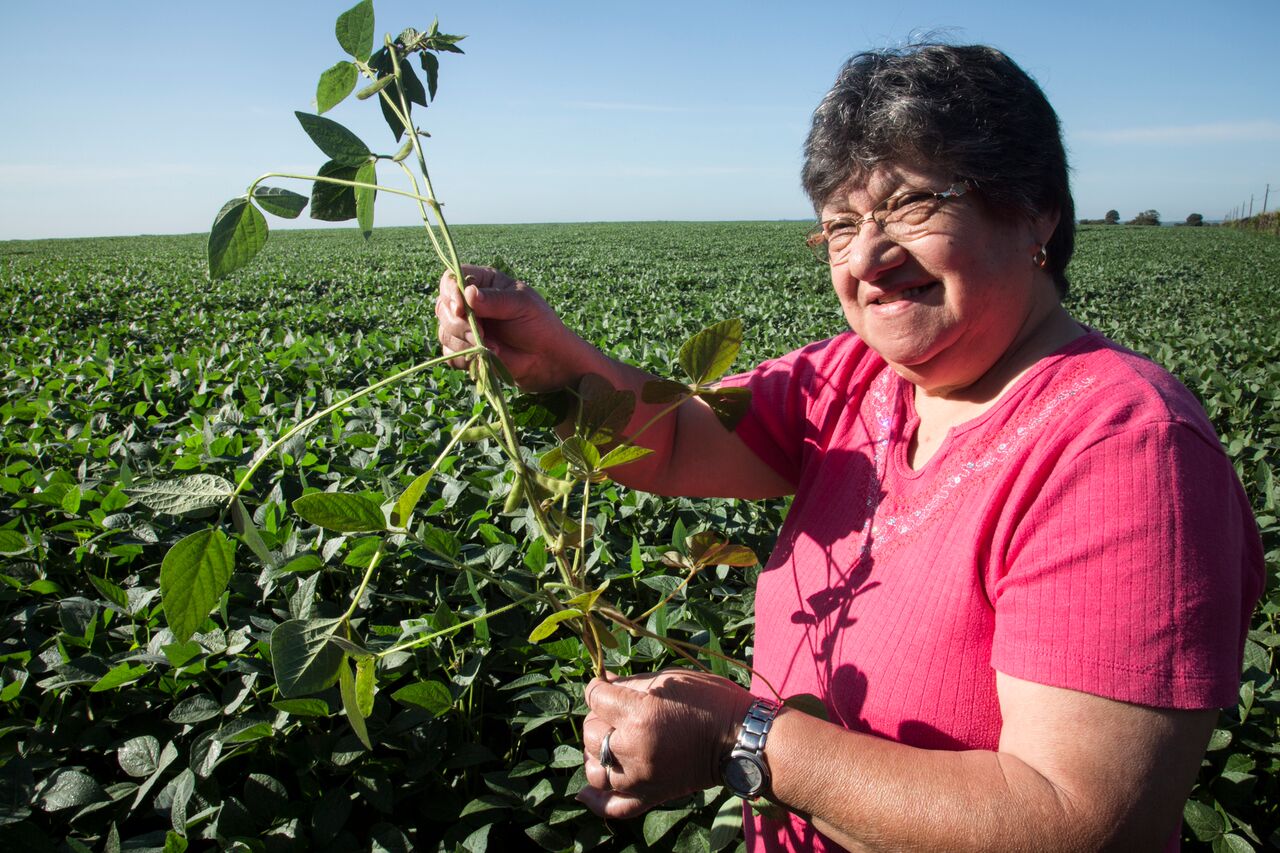 Blanca Saiki has been growing grains for almost 45 years. She owns 500 hectares in the district of Pirapó, 420 kilometres from Paraguay’s capital, Asunción. She cultivates soybean, wheat, corn, sunflower, sorghum, canola and other agricultural products.

Blanca is one of the nearly 70,000 grain producers in Paraguay who are responsible for more than 60 percent of the country's exports and around 17 percent of GDP.

Grain farmers are called "sojeros", a pejorative shorthand for soybean producers, and blamed for the deforestation and contamination of soil and water resources in the country. Blanca accepts that there are practices that should be improved, and she cares about getting on the path to sustainability.

Blanca is a strong woman with a big personality. When she was very young, she left her studies to work and help with her family’s household expenses. Seeking better opportunities, she migrated to Pirapó, a district founded in 1960 by Japanese immigrants dedicated to agriculture. There she met the man who later became her husband.

"A Paraguayan with a Japanese was not normal,” Blanca says. “My marriage was difficult. I was not accepted by my husband's family. The economic situation was not good.”

At first she also experienced distrust from the workers on her husband’s farm, who had little confidence in this young woman’s ability to play the role of farm administrator, managing the accounts and machinery. But, Blanca was determined to make her situation work.

“I coped with the circumstances, and together with my husband we embraced the small farm living," she says.

This new life also included looking after her three children. As little kids, they used to ride with her on the tractor. Their day-to-day life passed between drying the soybeans in the sun, packing them, moving them and stacking them in the storeroom.

At the end of their days toiling on the earth, they were unrecognizable under thick layers of dust. In the evenings, they would make the necessary calculations to determine how much they could invest or borrow for production. When her husband died, Blanca picked up the reins of the entire operation.

Paraguay is the world’s sixth largest exporter of meat, the sixth largest producer of soybeans and soybean oil, and the fourth exporter of that grain. Currently 3.4 million hectares are planted with soybeans. According to the Union of Production Guilds (UGP), 20 percent of that area is worked by more than 38,000 small producers, who cultivate plots of up to 20 hectares each.

The Green Production Landscapes project was developed to respond to the tension between the farmers’ desire to increase grain production and the need to protect the environment. It is implemented by the Environment Ministry with support from UNDP, the Green Commodities Programme and funding from the Global Environment Facility (GEF).

With the aim of promoting biodiversity and sustainable soil management, the government-led National Platform of Sustainable Commodities was created with support from UNDP’s Green Commodities Programme, made up of producers from the area, including Blanca. She was instrumental in the drafting of the 2018 action plan, which includes the diffusion of good agricultural practices.

A land registry of the Naranjal farms will be established to monitor compliance with environmental regulations. A website will provide information on each farm, from the state of payment of taxes to the verification of forest area coverage and protection of waterways, among other data.

Blanca is one of the very few women participating in the Platform, which she sees as an important forum for enabling stakeholders from across the supply chain to work together to make production of these economically vital commodities more sustainable.

She also hopes that more women will get involved. Times are changing, she says: “I hope this new generation will make real social change.”