“My main mission as UNDP Goodwill Ambassador is to shine a spotlight on the fact that inequality can affect people in rich and poor countries alike. Many nations have greatly reduced poverty, but inequality has proved more stubborn,” said Lakshmi, adding that “inequality is further compounded by gender, age, ethnicity and race. It especially affects women, minorities and others who face unimaginable discrimination in the societies in which they live.”

Previous to her appointment, Lakshmi participated in a UNDP panel during the 2018 edition of the Social Good Summit, where she discussed how women are leading the call to leave no one behind. She was also the host of UNDP’s Inaugural Global Goals Gala, in 2016, which celebrated the organizations 50th anniversary.

On the occasion of her appointment, Padma stressed that her partnership with UNDP helps her to “bring about a future in which every person, regardless of their income, their gender or place of birth, is empowered to live the life they want.”

Padma Lakshmi is best known for starring as a judge and host, as well as executive producer, of Bravo Television’s Emmy award-winning series Top Chef. She is also a New York Times bestselling author, the co-founder of the Endometriosis Foundation of America, a Visiting Scholar at the Massachusetts Institute of Technology, and an ambassador for the American Civil Liberties Union advocating for immigrants’ rights.

In her role as Goodwill Ambassador, Padma Lakshmi focuses on fighting inequality, discrimination, and empowering the disenfranchised. 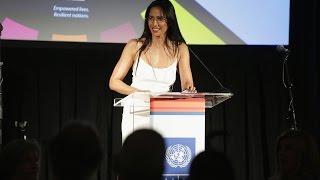