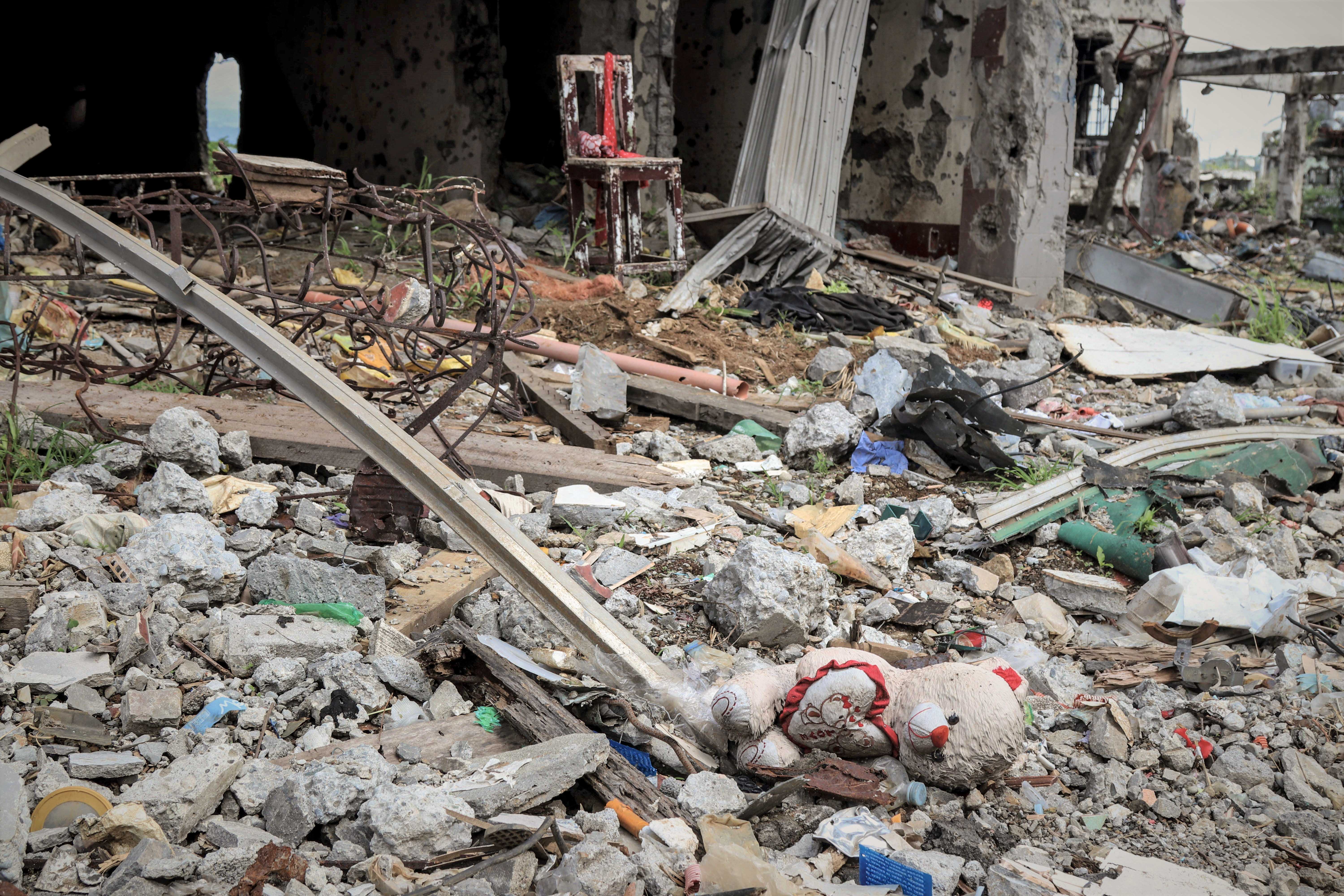 A toy bear lies in the rubble of what was once Marawi City, the Philippines. ©UNDP Philippines/Mailee Osten-Tan

All around me, shells of buildings stood barely supported by pieces of crumbling concrete and crooked steel poles. On the left, I could see a dusty refrigerator, smashed, face-down on the ground. On the right, what was once a bank six storeys high was now slumped on its side. Tiles crunched under my feet; stagnant water played host to swarms of mosquitos.

I was in what was once ground zero in the Most Affected Areas of Marawi, the Philippines. In 2017 ISIS-affiliated groups including the Maute group and Abu Sayyaf Salafi attacked the city. The five-month-long battle that followed between these groups and government security forces became the longest urban battle in the modern history of the country. I couldn’t help but wonder how someone could turn against their neighbours and destroy their own city in this way.

Some point to the fact that the grievances of certain violent extremist groups are rooted in local contexts. Yet it would be impossible to plot a clear path that led to the Marawi siege. By joining the Islamic State, many of the rebels who had lived and grown up in Marawi had become ensnared by an ideology. Thousands of miles away from the Middle East, ISIS demonstrated that ideology has no physical borders.

Hateful narratives are powerful and can set up divides in communities. Founded on a notion of fundamental difference—of ‘othering’, of good versus evil—these divides are nevertheless arbitrary.

When it comes to the spreading narratives, the Internet is both a blessing and a curse. I think back to a fantastic podcast called ‘Caliphate’ by the New York Times I recently discovered, which talks about how a foreign fighter become radicalized in Canada through watching Anwar al-Awlaki’s videos online. Social media platforms are critiqued for not taking down harmful content fast enough, but to me this seems like a never-ending game of whack-a-mole.

But why not tackle online hate through changing the predominant online landscape? Why not shape the online space as an inclusive community, with content that promotes understanding? This approach is called ‘alternative narratives’. Projects such as UNDP’s ExtremeLives video series use this approach by speaking directly with members of communities affected by violent extremism, recording these interactions, and disseminating their personal stories online.

This is something she knows all too well. Growing up in Myanmar in a military compound, the persecution of minority groups was something she never initially questioned. “I used to be an extremist,” she told us. “But after high school I met different people from different backgrounds. I heard different stories, and that was the point that changed my life. Listening to stories made me more moderate.” She hopes telling her own transformation story on platforms such as ExtremeLives will help positively influence others.

This is what the project hopes to achieve. Behind hateful motivations are complicated personal stories; not only from the perpetrators of violence, but from the communities they affect, from experts who try to make sense of them, and from governments who try to deal with the aftermath. It’s only by speaking to people on their own terms, and recording and sharing those stories that we can begin to understand how to best prevent violent extremism in different contexts.

I too had my mind changed recently.

Coming to Marawi, I thought all I would see was a city on its knees. But then I spoke to Natheera who had been at her uncle’s house the day the siege began. She hid in the house all night before escaping with her young niece during a short ceasefire. Like thousands of others displaced by the siege, she spent months moving from one location to another and now lives in nearby Cagayan de Oro.

“Since birth I spent my whole life in Marawi. I miss the life I used to have in that place. I miss going to market. We lost everything,” she told me.

But listening to how Natheera was coming to terms with her new life made me realize that while ISIS had destroyed her home, they had not destroyed her spirit. She too hopes that by telling her story she can show others that it is possible to rebuilding one’s life after an atrocity and thrive.

“We refuse to be victims,” she said, “Instead we choose to be resources.”

ExtremeLives is honoured to be one of 120 projects showcased at the Paris Peace Forum this year as an example of a concrete solution towards achieving a more peaceful future. The video series uncovering stories of violent extremism returns January 2020. The project is co-funded by the European Union.