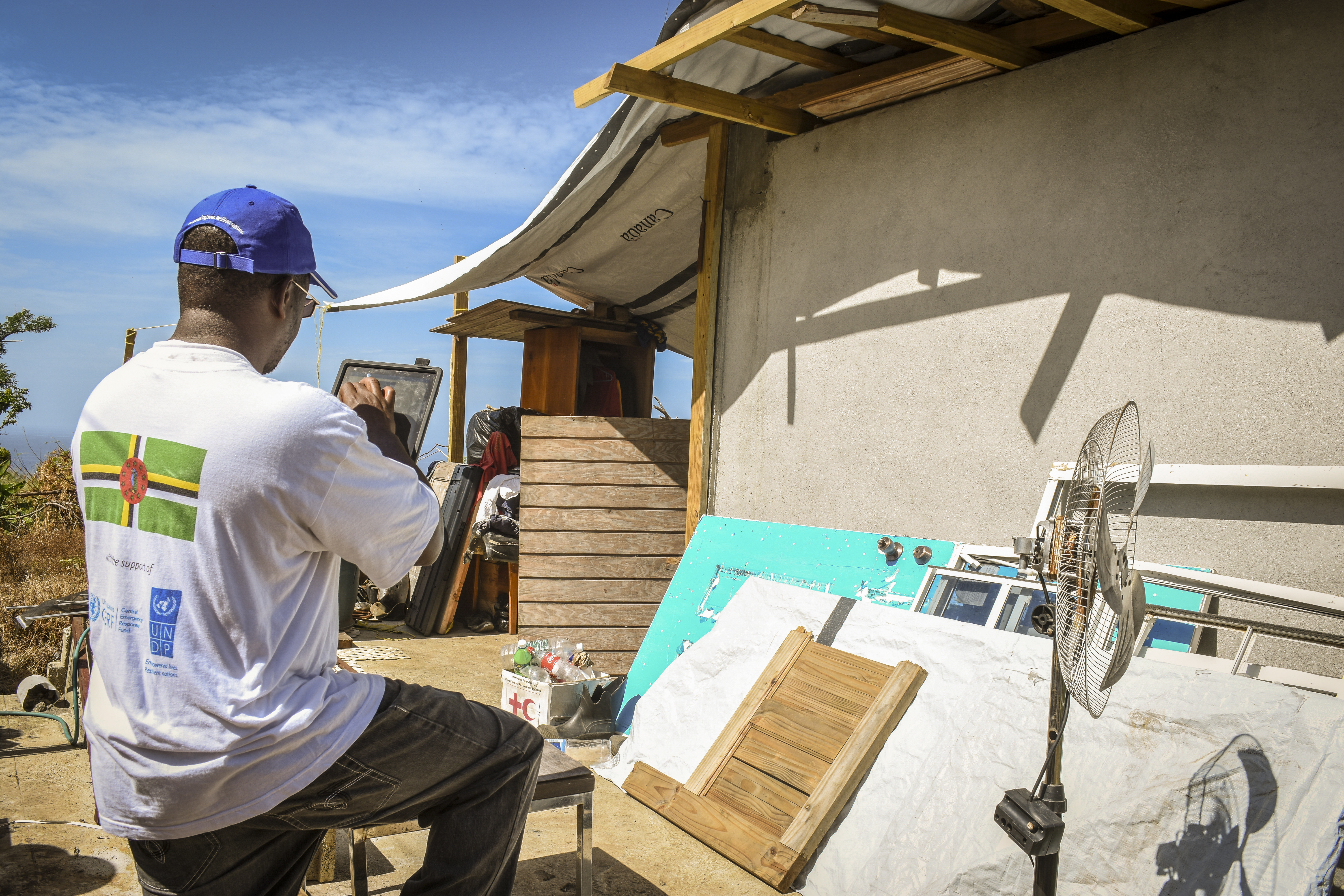 Since Hurricane Maria, one of the most urgent needs has been to re-roof houses, and this has been the focus for most supporting entities, including UNDP. Photo: Zaimis Olmos/ UNDP Dominca 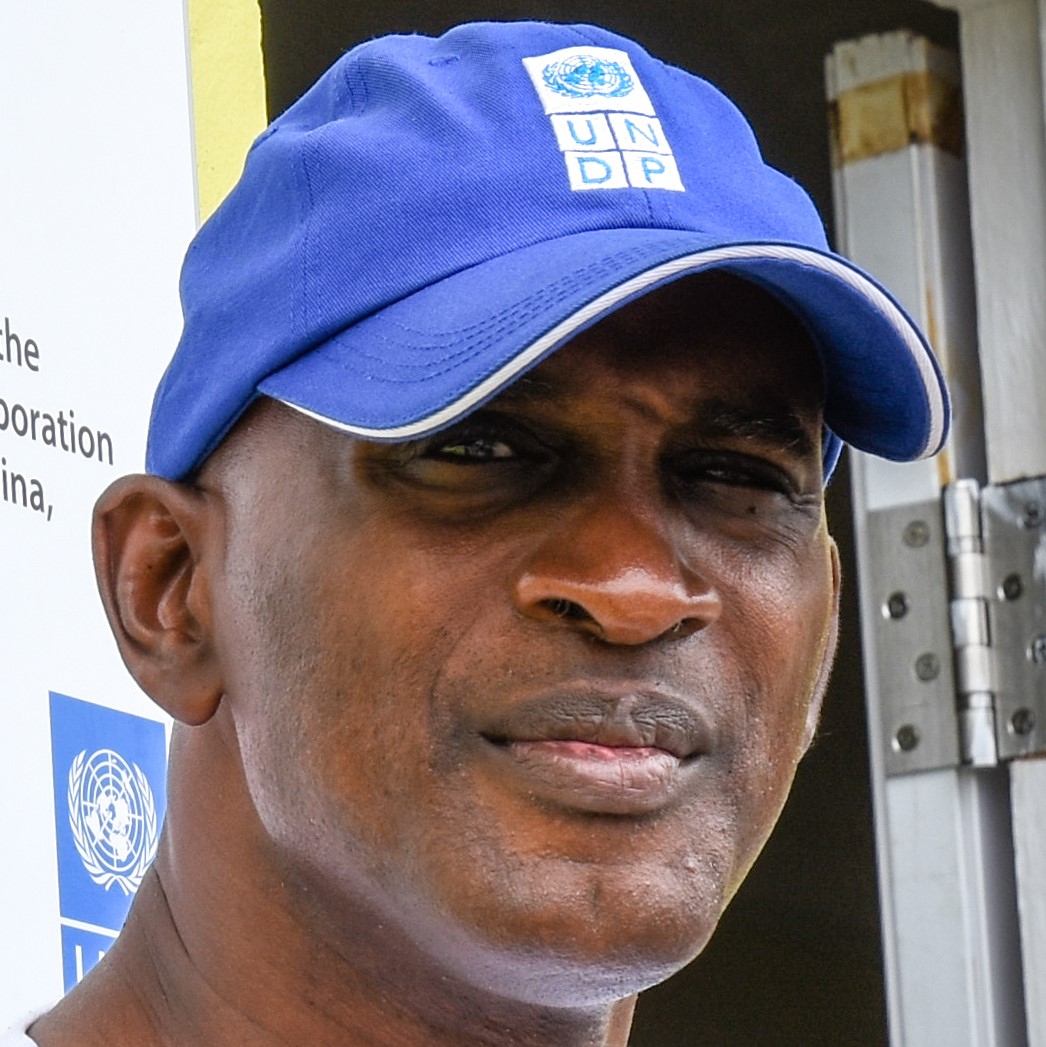 The Prime Minister of Dominica described living through the 2017 hurricane season as being on the frontline in war against climate change and has committed to making Dominica the first climate resilent naiton.

On 18 September 2017, Dominica was subject to Maria, a category 5 Hurricane for which it was not prepared.

Flying into the country on 28 September, the reference to a war resonated with me as I saw the brown, defoliated forests, which I knew from past visits to be a lush canopy of green; the shocking amount of timber that made its way to the coastal areas; the impact on homes, many of which were without roofs; and the amazing amount of debris. Once on the ground, the impact on the people and communities was even more stark, with so much lost and destroyed, there was a profound sense of bewilderment and in many cases desperation. The international community were already on the ground in the form of the UN Disaster Assessment and Coordination team, OCHA and WFP. The Caribbean Disaster Emergency Management Agency (CDEMA) also provided direct support to the local Disaster Management mechanism, as did other actors as well as regional and international disciplined forces.

The priority in the early period was distributing water and non-food items, establishing improved understanding of the needs of those communities that were cut off, and supporting the reestablishment of government systems. This early period assisted UNDP in defining its initial and ongoing support for early recovery.

The Post Disaster Needs Assessment (PDNA), led by the World Bank and facilitated by UNDP, was undertaken at a relatively advanced stage due to the importance of accurate information required to inform a substantive recovery programme. The assessment revealed the damage done by the storm equated to over two years of Gross Domestic Product (GDP), with the housing sector being one of the most affected. 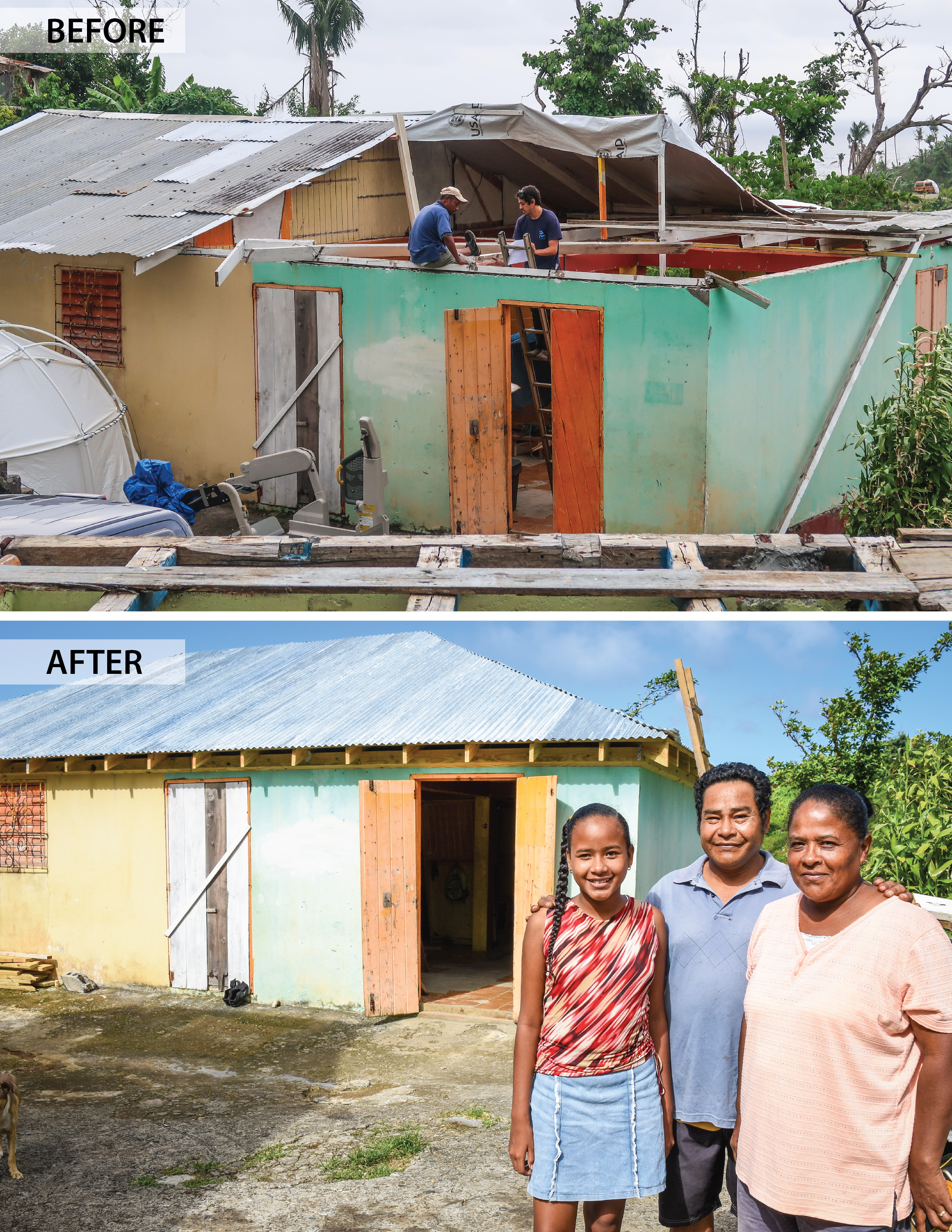 Since Hurricane Maria, one of the most urgent needs has been to re-roof houses, and this has been the focus for most supporting entities, including UNDP.  UNDP’s approach to re-roofing buildings – including community infrastructure such as schools, clinics and hospitals – was multifaceted and involved (1) the use of modern technology, particularly for the preliminary assessment; (2) strong partnership with a myriad of actors; (3) advocacy and capacity building using technical expertise; and (4) procurement and installation of the appropriate material.

With support from the Microsoft foundation, a mobile application for the damage assessment has been created. Tablets donated by Microsoft have meant that data can be processed automatically, including the status of the re-roofing, GPS coordinates and pictures of affected buildings. UNDP also undertook planning, coordination and troubleshooting to capture data on every building between November 2017 and the end of January 2018. This rich database has since provided accurate information on the extent of the damage, its location, type of roof, size of buildings, all of which are vital for recovery planning and monitoring the progress of rebuilding towards a resilient nation.

The collective approach undertaken in the reconstruction process, under the auspices of the Ministries of Planning and Housing, allowed for broader clarity among all stakeholders who together managed 29,000 applications for building support, when a normal year would see around 400 applications. The process also supported effective training and advocacy around the national building standards, increasing the capacity of the government and local partners to build to a resilient and more weather-proof standard in the future. 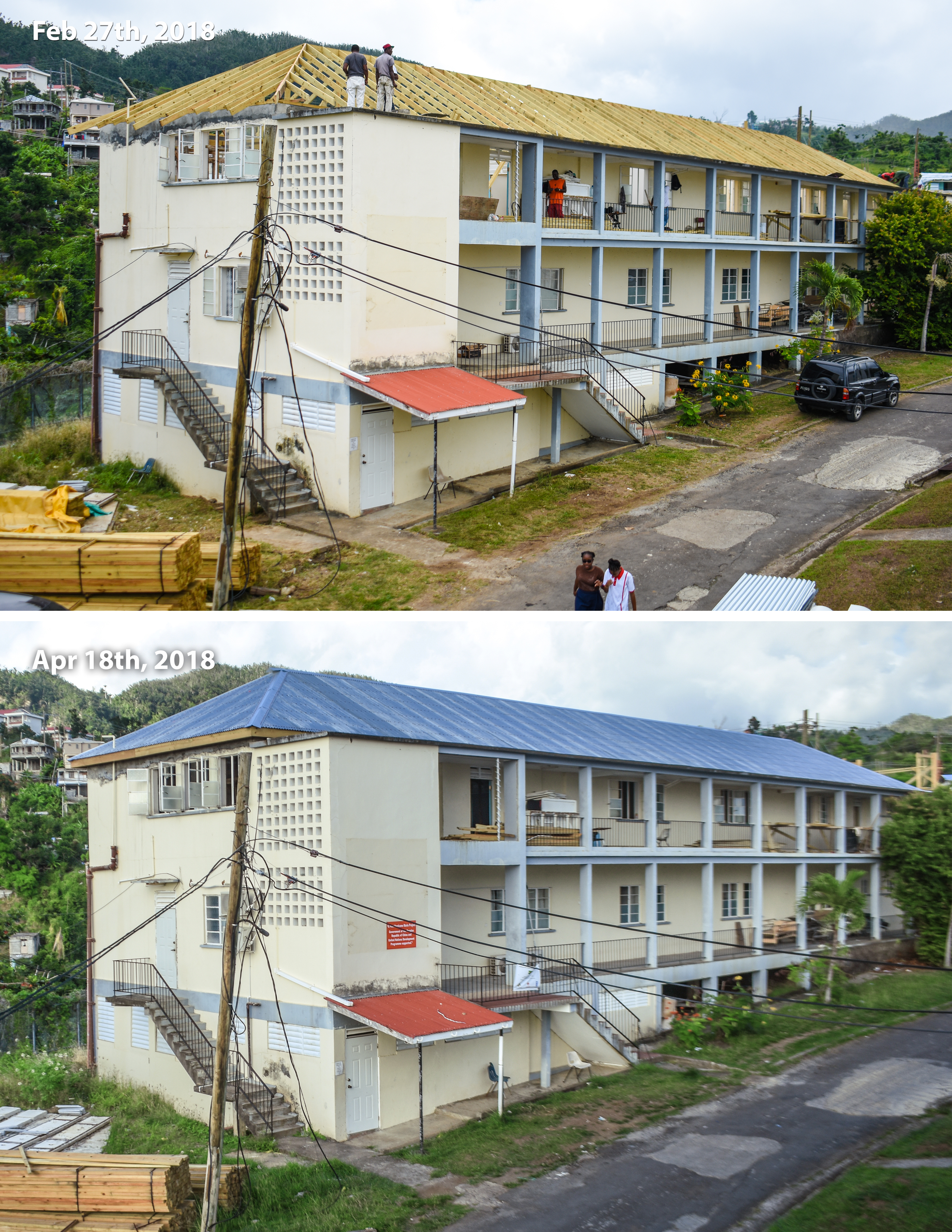 Despite a very daunting task, the below results illustrate what can be achieved with cohesion and cooperation:

The resources from the Peoples Republic of China through the South-South Cooperation fund and the technical expertise of Engineers Without Borders (EWB) have been critical for the implementation of UNDP’s projects in Dominica. It is to be noted that the approaches adopted have been embraced and owned by the respective ministries.

In Dominica, it is clear that a return to “normal” is not what is required. The goal instead is to define and strive towards resilience that would reduce vulnerability to these events and where impacts do occur, facilitate more rapid recovery, thus realizing national and global development goals. 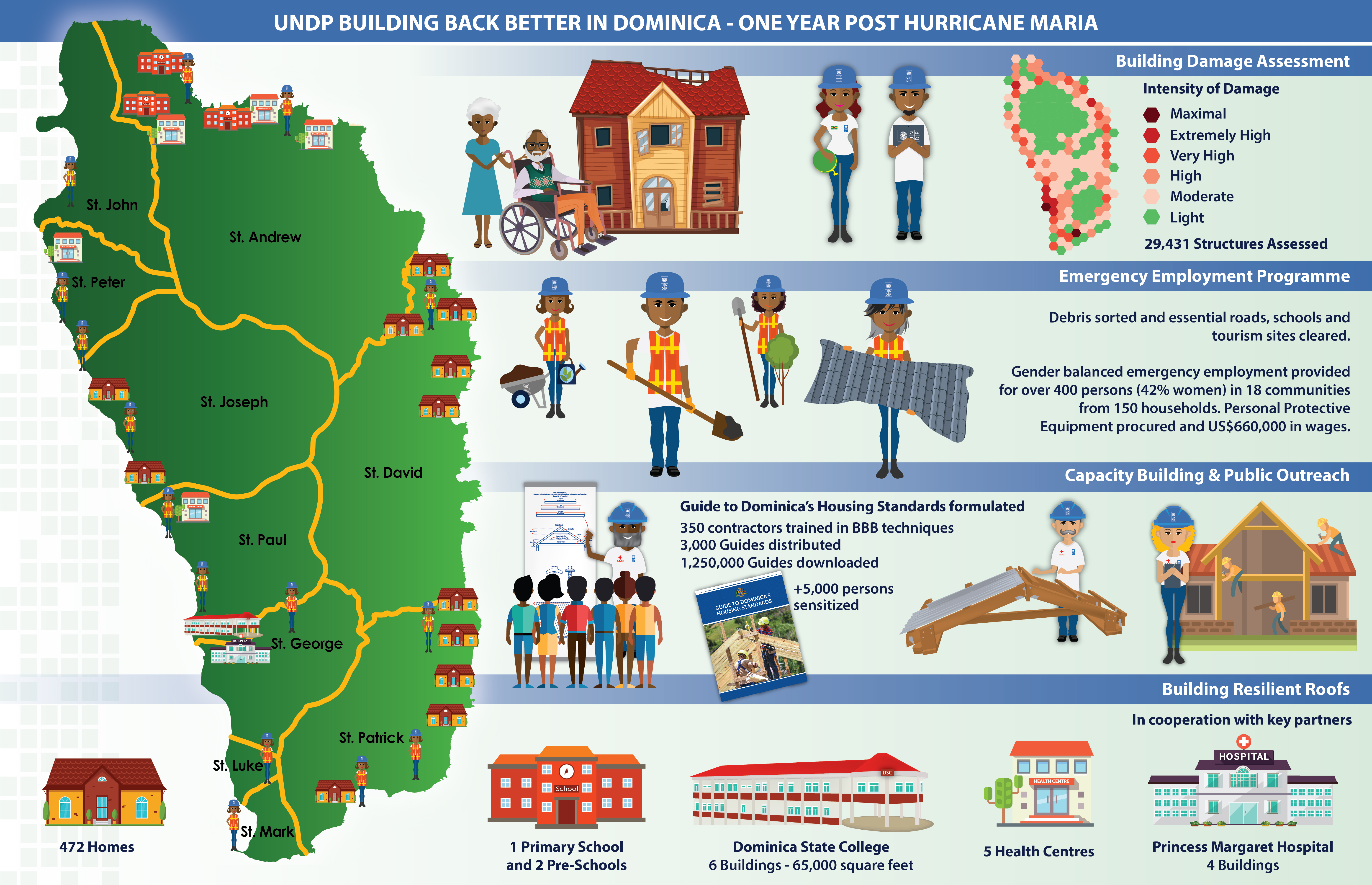